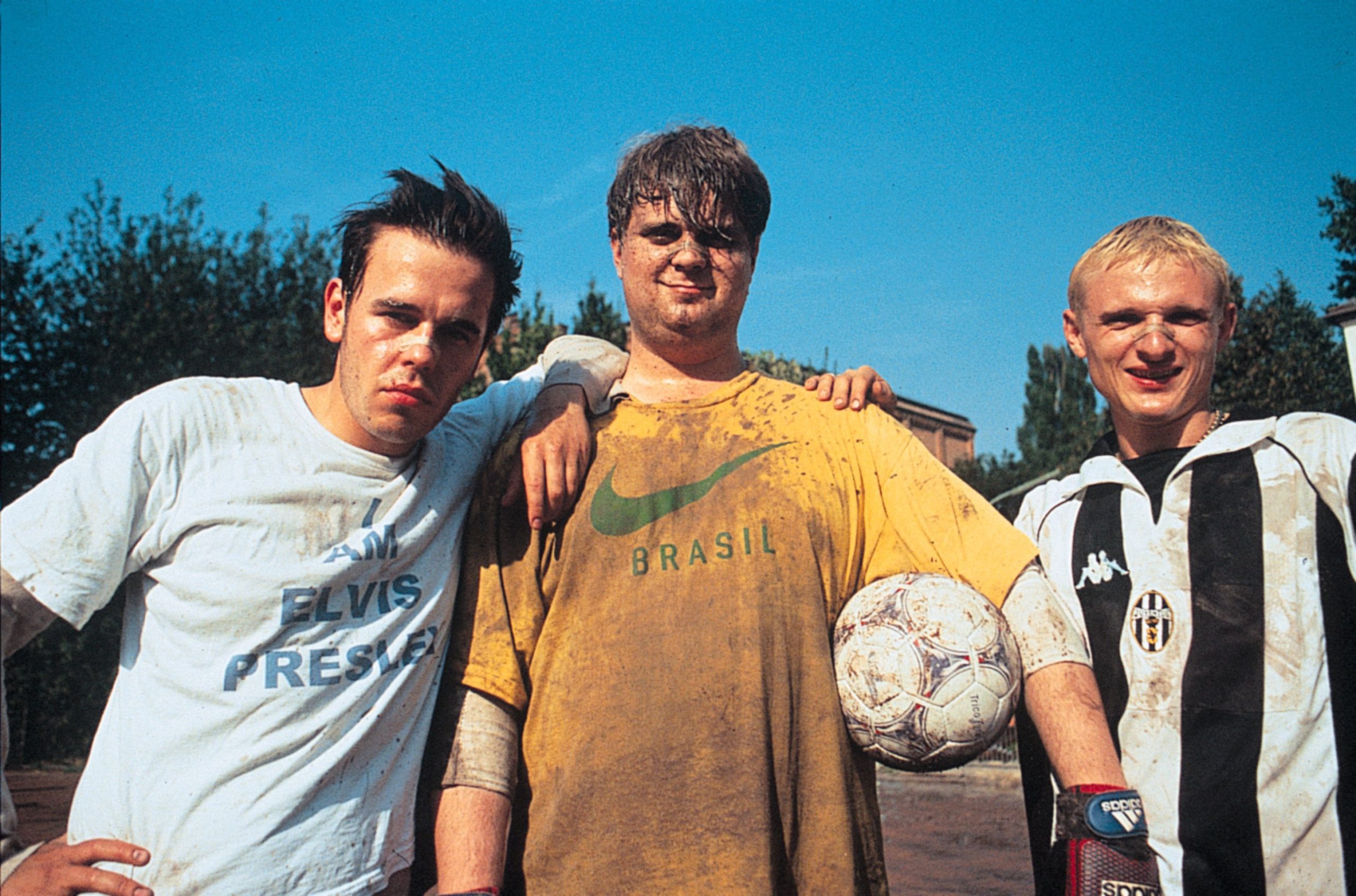 Gigantic is a German film from 1999 about three Hamburg lads – 20somethings – who inhabit the back end of the cultural landscape. McJobbers and party animals, they’re so-so at everything, at best, terrible at some things, but one thing they do have is enthusiasm for life. It makes for largely unsuccessful lives, but fascinating, sometimes humorous if uneven viewing.

1999 was the year of the McJobber movie and Gigantic (Absolute Giganten in the original German) could almost be seen as the German equivalent of something like Human Traffic, but with the drugs dialled right down, a tale of lairy lads, living for the weekend and the desire to escape.

The story kicks off at the point where the troubled Floyd (Frank Giering) is announcing to his friends, tracksuit-wearing would-be rapper Ricco (Florian Lukas) – his raps are so terrible it’s amusing – and Walter (Antoine Monot Jr), owner of a souped up Ford Granada with go-faster stripes down its bonnet, that he’s had enough of Hamburg and wants to take off for pastures new. Floyd, Ricco and Walter spend one last night together as the rollicking three caballeros.

This is director Sebastian Schipper’s debut movie and he knows that the “big last night” idea has been played to death, and sokeeps the action moving, powering through the most familiar scenes at a speed that doesn’t insult the intelligence.

If the name Schipper is familiar that’s probably because he would later direct an acclaimed movie called Victoria, which followed a young woman on her big night of adventure in Berlin, all two hours and 20 minutes of it done in one take. Bravura stuff, and it didn’t feel like an arid technical exercise.

There are hints of what’s to come in Gigantic. Two sequences in particular. In one, set in a tiny apartment full of other people, furniture and the mess of everyday living, Schipper’s camera slides back and forth through the space in an extended single shot that’s remarkably fluid and must have been extensively choreographed. And in the film’s climactic scene, the table football game, Schipper gets right down on a level with the plastic football players and follows the game’s progress through two games. It’s thrilling, innovative, edge-of-seat stuff.

Schipper is one of the talented crowd that ran with Tom Tykwer and Stefan Arndt, who are producers here (he was an actor in Tykwer’s breakthrough, Run Lola Run, for instance), but even he knows that there’s something a touch hackneyed in his basic idea. For all Gigantic’s moments of visual virtuosity, there’s a slight self-consciousness to the film, though the good-natured playing by Giering, Lukas and Monot Jr helps it bounce over the rough spots.

Monot Jr has gone on to have a successful career in German TV, Lukas was the pivot on which the intriguing show Weissensee (an even-handed dissection of life under the Stasi in the DDR) turned, and also turns up in films from Good Bye Lenin! to The Grand Budapest Hotel. Giering, whose Floyd is driver of the plot, died tragically young, of something drink-related, and has the puffy face here of a man who’s been hitting the bottle a bit too hard.

At its simplest, this is a series of scenes strung together without too much of a dramatic throughline. Schipper could easily have introduced one – a deadline, maybe? – but has chosen not to. It’s almost as if Gigantic is a deliberate exercise in working out how all the equipment works, of warming up the engine. A pleasant but slightly inconsequential movie with brilliant flashes is the result.


Gigantic – Watch it/buy it at Amazon