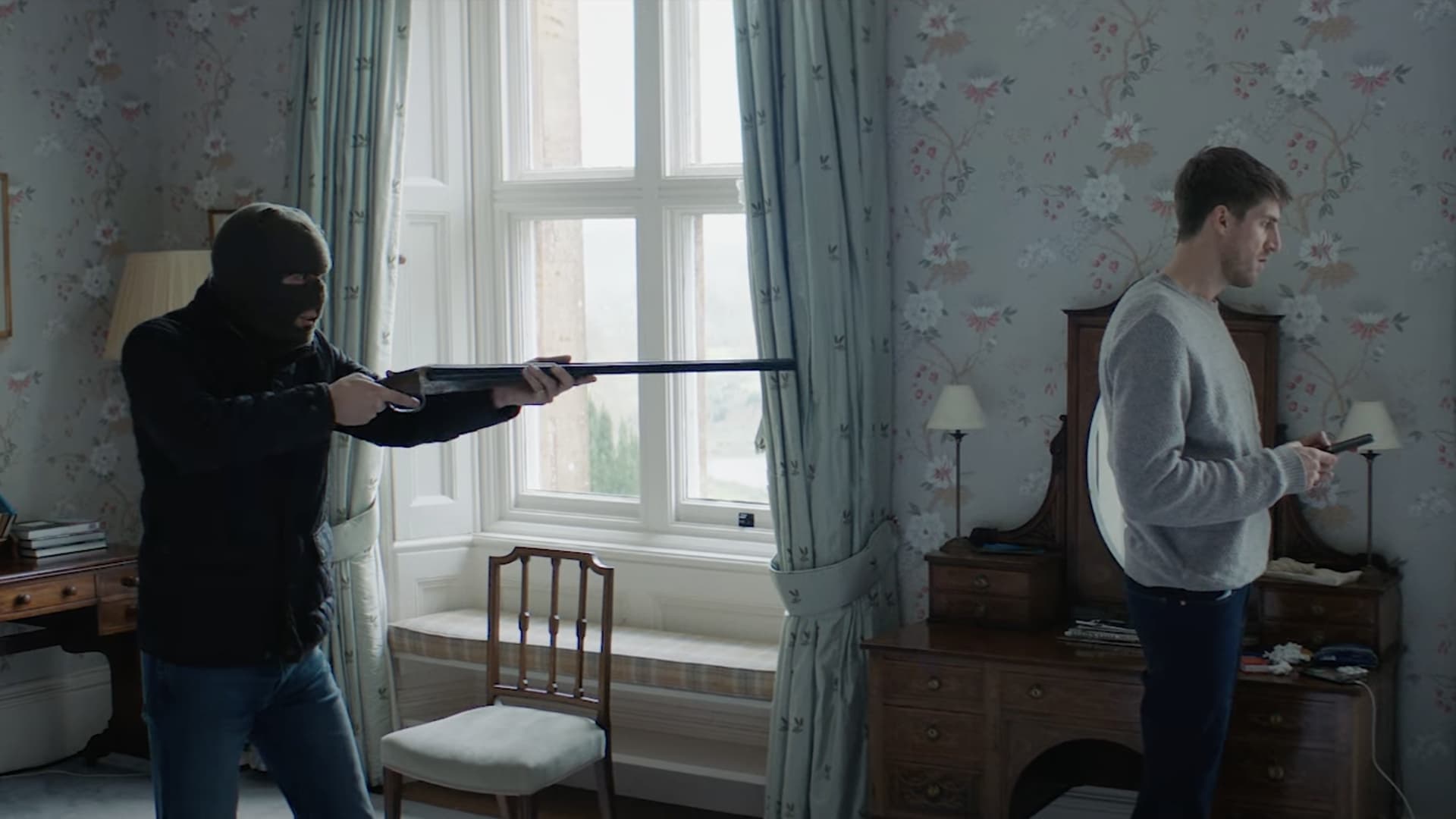 Psychological horror is delivered in an unusually pure form in All My Friends Hate Me, a British movie saving its best moves for its closing moments, when it shifts tone three, four, maybe five times.

It repurposes the plot and some of the mood of The Wicker Man – a guy bumbling around in a situation he’s drastically misreading – but instead of murderous yokels as his nemesis, this guy is having a reunion weekend away with old university friends at the country pile of one of them, the incredibly wealthy George (Joshua McGuire).

Things get off to a bad start when Pete gets lost en route, disturbs a mysterious/furious man sleeping in a filthy car and asks a local for directions – an interaction that will come back and bite him later on. But for the most of it this is a weekend of painful anxiety for Pete, with people he isn’t sure he knows any more. He feels awkward and out of place and they seem to have lost whatever respect for him they might once have had.

This is all compounded by the presence of Harry (Dustin Demri-Burns), a local oik Pete’s friends have befriended in the pub and who is now muscling in on the weekend, acting as a lord of misrule and generally getting up Pete’s nose. Is Harry also needling Pete, or is Pete just being a wee bit sensitive? How will this gang of old friends react when Pete’s girlfriend, Sonia, arrives later? In particular, how will Claire (Antonia Clarke) take it when Sonia (Charly Clive) turns up, what with her and Pete once having been an item so serious that Claire attempted suicide when they broke up, or so the story goes?

A grand house, some beautiful but forbidding English countryside, a handful of characters, these elements are expertly spun together by writers Tom Palmer and Tom Stourton (who also plays Pete) and director Andrew Gaynord, who is alive to the pagan undertow in the landscape.

What’s interesting about All My Friends Hate Me is how carefully it keeps us on one side of the line dividing the psychological from the out-and-out horrific. Will it cross over, as horror films eventually must? The film is a tease, playing with genre expectation, as well as stereotypes about feral locals with regional accents and brainless toffs with no backbone.

This starts with Pete – who may be just a guy having a bad day or perhaps there’s something more deep-seated going on. But it’s most keenly expressed through the pivotal Harry, Dustin Demri-Burns putting in a brilliantly ambiguous performance as a person who’s true nature seems to flicker. One moment a lairy local who loves a good time, especially if out-of-towners are buying the drinks. The next something much darker, like something that’s slipped in through a portal connecting up to a pre-Christian age.

Personally, I wanted it to go banzai horror, to break the terrible tension that builds, builds, builds as Tom endures the weekend from hell, when drink, drugs and anxiety combine with Pete’s own rather woke sense of himself – he has a job helping refugees and won’t stop bringing it up – to progressively alienate Pete from the others. We feel sorry for Pete. Or perhaps we don’t.

Palmer and Stourton’s embrace of ambiguity means that all the characters have a bit more depth than is strictly required by the plot’s mechanics. Awful toff Archie, off his face on cocaine and ketamine most of the time, does realise he’s an awful toff. George may well be aware that beautiful Fig (Georgina Campbell) is with him on account of his huge wealth, and Fig might well have other reasons as well, whereas Claire isn’t entirely the limp rag she at first appears.

It does not end up with Pete in a burning wicker man, or anything like it, but it does all resolve in a mad moment that’s worth hanging on for, when all the tension comes to head and… well, watch it for yourself.


All My Friends Hate Me – Watch it/buy it at Amazon

Wildcat is the sort of film where strangers wake up in a room together. Often, this sort of film – a handful of actors on one set – is all about learning who these people are and why they are in the room together in the first place. Often there’s also a kick in the tail where one person turns out not to be who they say they are, or the commonality connecting everyone is suddenly revealed. Not so here.

We know almost from the outset who these people are – they’re journalist Khadija Young and a soldier called Luke, only survivors of an ambush on a convoy in Iraq, who are now locked up together in a cell. Khadija and Luke are Americans. Their captors are Iraqis and they’re keen to extract information from their prisoners about the heavily fortified compound that’s the local US base. Scant minutes in we’ve learned that Khadija might be a spy, or at least a CIA employee, a translator, maybe, using journalism as a cover. Which only doubles her jailers’ efforts to get information out of her and Luke.

On the other side is the boss, a known terrorist called Abu Khalid (Mido Hamada), plus three sidekicks who mostly don’t talk. One of them, a big lumbering guy called Hamza (Maz Siam), is the torture technician, and goes about his work the way a mechanic goes to work on a car.

The torture starts early on. Pliers, electrodes, beatings. We don’t see much of it, thankfully, though both Georgina Campbell, who plays the resourceful, smart and tactical Khadija and Luke Benward, who plays the jockish, resigned Luke, are skilled enough as actors for their characters’ fear to transmit from screen to viewer.

Thanks to Abu Ghraib and the reports that have emerged from the so-called black sites, we’re used to stories about Americans using torture. It’s unusual to get it from a different perspective – Iraqis dishing it, Americans getting it.

Writer/director Jonathan Stokes has devised this small but very efficient drama as a series of vignettes. How do Khadija or Luke go to the toilet? We don’t know. We only see them shackled, the metaphorical lights going down on one scene only to come up again and it’s the next day or some time later. We know time has passed because Khadija has yet another fingernail missing, thanks to Hamza’s pliers.

In a moodily lit room where sounds have been amplified just a touch – rattling chains, doors being unbolted, the snap of an electrode – the focus is heavily on the actors. It’s a very small cast. Georgina Campbell, Mido Hamada and Luke Benward doing most of the heavy lifting. Benward has the most thankless role, as the wounded and largely passive soldier. I did not quite buy his developing relationship with Khadija but then I don’t think Stokes is fully invested either. He’s more interested in the relationship between Khadija and her torturer.

Psychologically, how do people resist or accommodate themselves to torture? Because Campbell is so good at portraying someone who is absolutely terrified, this question shoulders its way to the front of the queue. By playing mind games with their torturers and with themselves seems to be Stokes’s conclusion. And do torturers torture out of a sense of sheer badness, or do they use an everyday rationale to justify it? Without overly burdening the film with “thinky” speeches, Stokes explores those angles too, and Hamada helps with a performance full of easy menace but with a flicker of something else going on behind those impassive features to suggest an internal debate.

What of the fact that the torturer is a handsome man and his captive is a beautiful woman? Is that in play too? Has the terrorist fallen for the American devil? And isn’t the torturer/tortured relationship in any case a sort of weird, perverted flirtation? Stokes asks all the questions and just kind of leaves them all dangling. That’s why I liked this film.

Wildcat – Watch it/buy it at Amazon