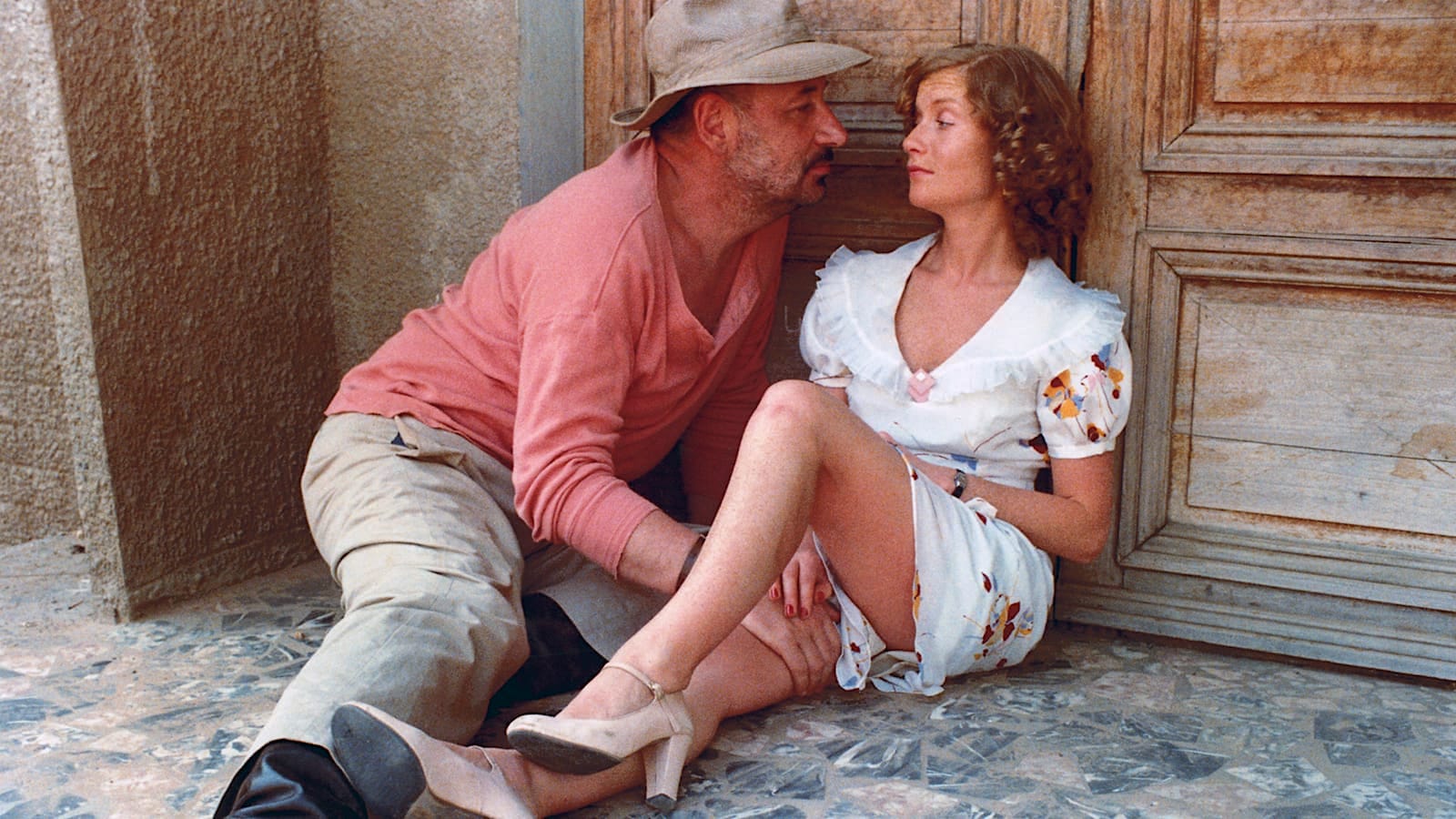 Bertrand Tavernier’s 1981 movie Coup de Torchon is a bizarre adaptation of Jim Thompson’s novel Pop. 1280. Bizarre not because Tavernier and his co-writer Jean Aurenche have moved the action from Texas to West Africa. Nothing wrong with that. It’s the way they’ve excised Thompson’s black humour and inserted French farce in its place, draining the story of power as they do so.

It’s 1938 and we’re in Senegal, where the white colonial French lord it over the black locals. They’re a mixed bunch, the whites, most of whom wouldn’t amount to much back home but have a status and lifestyle out here that, Tavernier makes clear, is really rather lovely. They drink, they amble about, they have lovers, whoop di doo.

Law and order is maintained, or rather isn’t, by the entirely sappy local white cop Lucien Cordier (the hangdog Philippe Noiret), who will do anything for an easy life, turning away when he spots a crime, making weak protests about someone’s actions only when he absolutely has to. He’s so sappy, in fact, that his wife’s lover is living under his own roof, posing, sneeringly, as her brother.

There is another side to Cordier, though. Not just his secret affair with the wife (Isabelle Huppert) of the town bully, Marcaillou (Victor Garrivier), but the fact that he’s a killer whose coldly methodical instinct is hidden to an almost fanatical degree behind the exterior of unkempt bonhomie. Cordier is another version of Jim Thompson’s ruthless, smart killer Lou Ford (who you may remember being played so brilliantly by Casey Affleck in The Killer Inside Me).

Tavernier paints a picture of a ceaselessly racist milieu – the whites take potshots at the dead black bodies floating in the river after dying of the dysentery that’s ravaging the area; dead whites get a proper burial. There is much talk of whether the local black people have souls, or are even human.

So when Cordier sets out on what looks like a one-man mission to clean up the town, done entirely on the quiet, he comes across as something of a force for good, especially as Noiret is playing up the liberal humanism of the man and downplaying the dead-eyed killer. Though it’s there – in one scene, as one of his victims lies dying, Cordier kicks him repeatedly, asking the ironic question as he does so: “what kind of man kicks a man who’s dying?”

This is a great cast – the hugely versatile Noiret (who worked with everyone from Alfred Hitchcock and George Cukor to Agnès Varda and Ted Kotcheff) is brilliant, but there’s also a youthfully coquettish Huppert, Stéphane Audran as Cordier’s hot-for-sex wife, Irène Skobline as the new teacher in town, whose pure soul brings Cordier up short, Jean-Pierre Marielle as a pimp dressed head to toe in immaculate white and Guy Marchand as the fellow cop Cordier nudges towards taking the rap for his murders.

It’s a superb looking film too, fabulously cinematic, with a grand sweep and a lot of air. Tavernier also makes use of the Steadicam, still relatively unknown in those days, in extended constantly moving single-shot scenes designed to unsettle the viewer with the Steadicam’s “disquieting effect” (as Tavernier put it in an interview). Kubrick did much the same in The Shining, shot the previous year.

As a film about colonialism, Coup de Torchon cannot be faulted. As an adaptation of Jim Thompson’s particular sort of noir, it can. Crime done as farce is a movie staple – think Pulp Fiction – but with the nods, winks and grimaces of that very particular French style of farce it’s a joke that wears thin very quickly, and it also has the effect of puncturing any sense of jeopardy that might be brewing. Will Cordier get caught? Do we care?

Yorgos Lanthimos was slated to direct another adaptation of Pop. 1280 but that idea seems to have fallen by the wayside. A pity, because his detached storytelling style might have got into the corners that Tavernier’s film, for all its wonderfulnesses, could not reach.


A movie for every day of the year – a good one

On this day in 1959, ex-prisoners Dick Hickock and Perry Smith killed wealthy farmer Herbert Clutter, his wife and his two teenage children in their remote farmhouse home in Holcomb, Kansas. Acting on information gleaned from a cellmate while inside, Hickock believed that Clutter kept a safe full of cash at his house and that he would easily be able to get his hands on it, abscond and start a new life in Mexico with the money. Clutter, a solid methodist, a conscientious family man and well-liked employer who paid his workers above the going rate, did not in fact keep any money at the farm, and did not even own a safe. Hickock had picked up Smith en route as wingman, and on the night in question the duo broke into the isolated house and roused the family from their beds. On learning that there was no safe, no money, it is believed that the probably psychopathic Smith murdered all four members of the family. The two fled the murder scene but were picked up in Las Vegas six weeks later. Smith claimed in his police interviews that Hickock had murdered two of the Clutters, though when it came to signing the confession Smith said wanted to accept responsibility for all four as a kind of favour to Hickock’s mother, who had been kind to him. The writer Truman Capote read a short report on the murders in the New York Times and decided to investigate, turning the results of his lengthy investigations (conducted along with Harper Lee, later of To Kill a Mockingbird) into his celebrated work In Cold Blood, which is often cited as the original non-fiction novel, a landmark piece of what has since been called New Journalism.

The Killer Inside Me (2010, dir: Michael Winterbottom)

Capote’s In Cold Blood examined a psychopathic murder in chilling detail, from set-up to payback on the end of a hangman’s rope. Jim Thompson’s original 1952 novel takes a similar path, except that instead of working his way from the facts back to the men, as Capote did, Thompson is inside the killer’s head looking out at the mayhem. Michael Winterbottom’s film cannot, of course, situate itself inside someone’s head, so instead has to rely on an actor who can suggest inner mental life without going down the Vincent Price route. In Casey Affleck Winterbottom has his man, an intelligent actor willing to take on roles that more conventional stars would run a mile from. After The Killing of Jesse James etc etc, this was Affleck’s second “coward” role, as Lou Ward, the smalltown deputy sheriff in 1950s Texas who kills because “I had to destroy them”, as the lurid tag line on the cover of the original Thompson novel put it. Winterbottom understands that to live up to Thompson’s brutal original, he’s going to have to include some shocking stuff. Hence the much discussed ugly nasty murder of Joyce Lakeland, a “hustling lady” played by lovely Jessica Alba, whom Ward has been ordered to go see and warn off a local bigwig’s son. It is horrible, gruesome, through-the-fingers stuff, but then this is murder we’re talking about; it’s not meant to be nice. The sexual stuff, too, is dark meat – Ward’s girlfriend (Kate Hudson) giving him a blowjob and tasting Joyce’s vagina on him – a moment that leads to more ugly unpleasantness. Affleck is the smiling killer par excellence, his light high voice the antithesis of the Clint Eastwood growl the most of Hollywood favours – and Winterbottom pairs it beautifully with Hank Williams on the soundtrack, singing songs of love and loss that hint at what has so disturbed this man. If you haven’t seen the film you might be surprised to hear that it is in fact, atrocity aside, a work of quiet restraint, of beautiful interiors, gorgeous clothes, elegant cars. Which makes Winterbottom’s choice of finish all the more surprising and welcome, funny even, in a rasping kind of way.

The Killer Inside Me – at Amazon