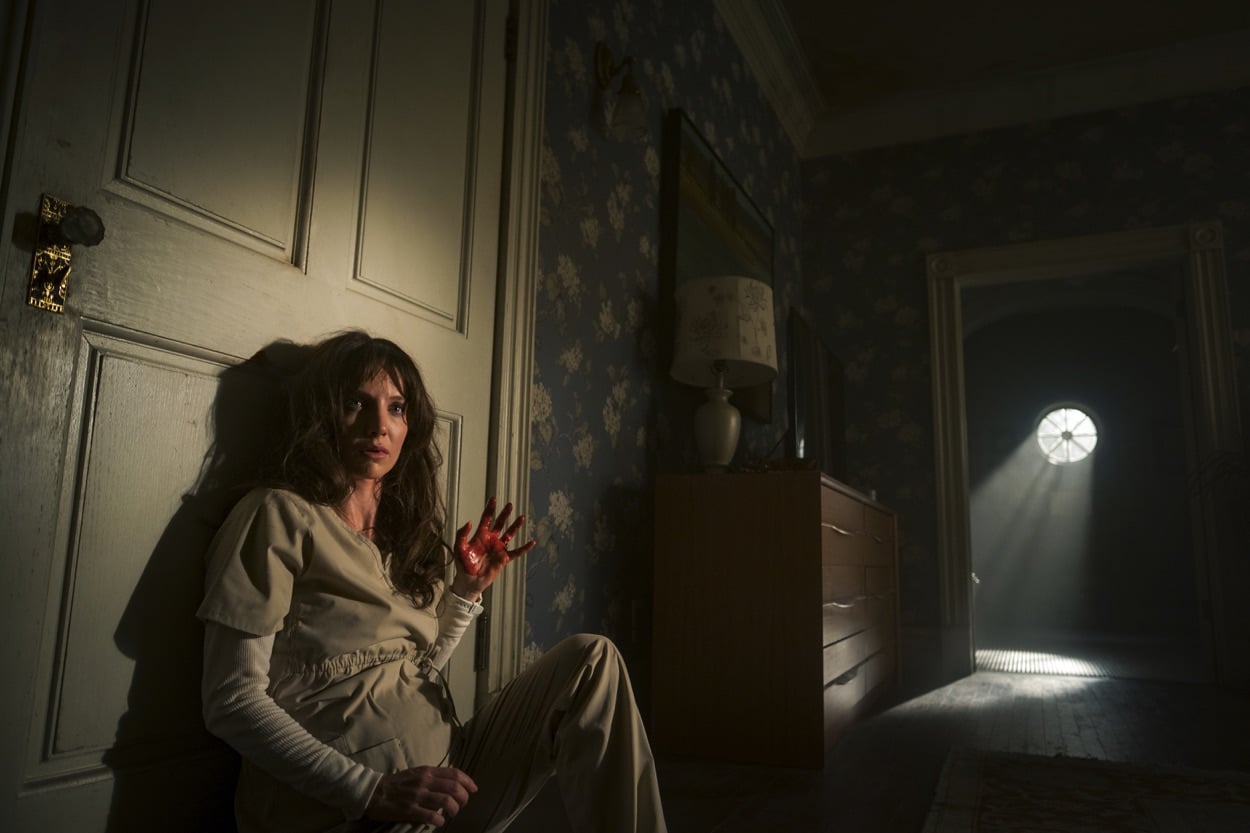 One word titles suggesting ugginess are a bit of a specialty for James Wan – Saw, Insidious and now Malignant, a never frightening but entirely entertaining tour of the all-you-can-eat horror buffet. The writer/producer/director piles on a whole load of stuff, then a bit more, and then more still. If nothing else, you have to admire the size of his plate.

It all starts pre-credits with one of those sequences set inside some murky clinical facility where a medical team are trying to subdue someone or thing and finding themselves up against it. The thing, or whatever it is, seems to be “drinking electricity”. Hold on to that thought – and then later try to fit it into the rational explanation offered for what this thing is.

Anyhow, things get out of control, there’s a bloody crisis and torrent of screaming. Cue opening credits and cut to some years down the line: a pregnant woman and her husband in their lovely Amityville-style house, where an “it’s happening again” kind of plot is apparently about to play out.

Madison (Annabelle Wallis) keeps miscarrying, and hopes that this time she’s finally going to get all the way to the delivery room, that’s if her cocksure and frequently violent husband (Jake Abel) doesn’t knock her around too much. But he does. Except this time his violence doesn’t have quite the effect he was hoping for. In fact it seems to unleash a malevolent force. Once again there’s a carnival procession of blood, violence and death, plus gore, splatter and screaming, to a soundtrack of bangs and whirrs, clanks and shrill static.

Husband Derek ends up dead and Madison ends up in hospital, where she loses her baby. Enter the cops, handsome and nice Kekoa Shaw (George Young), who gets warm feelings every time he sees Madison’s pretty and nice sister Sydney (Maddie Hasson) and ballsy sidekick Regina Moss (Michole Briana White), who doesn’t get warm feelings no matter who or what she sees.

Apart from a few grisly cutaways to the medical staff we met pre-credits, a dalliance with a speccy crime-scene technician (Ingrid Bisu) and the mother who gave Madison up for adoption years before (Jean Louisa Kelly), that’s the dramatis personae for what is about to follow, unless we’re counting the malignant “thing” – played by America’s Got Talent alumna Marina Mazepa as a variation on one of those spiderwalking creatures, and voiced by Ray Chase at full demented cackle.

Like a Hitchcock movie Malignant is one of those where the actors don’t matter an awful lot. They’re in the film but not really telling its story. Nothing wrong with any of them – they do as they told, hit their marks and are the consummate professionals in scenarios so familiar they’re almost comforting. From the opening pre-credits sequence right up to the final bloody grand guignol finish, this is all about James Wan’s love of the horror genre and his skill at taking a bag of bloody bits and turning them into something as functional as it is unwholesome.

Count them off as they come, the horror tropes – kitchen gadgets that operate themselves, lights flashing on and off, the nice Victorian house all furnished in dark wood and with more wall sconces than seems entirely necessary, the disbelieving cops, the “someone out there” who can explain it all, insanity, the supernatural, repressed memories, hyper-athletic ghouls, confinement, disembodied voices, the subterranean, spooky kids, a homunculus, rain-lashed streets, the old mental hospital, the evil twin, the gothic, the rococo, jump scares, “don’t go into the basement” moments, body horror, J horror, torture porn. I didn’t see a werewolf but that doesn’t mean there wasn’t one there.

Wan’s camera stitches it all together. One moment the cool narrative gaze of the third person, the next the first-person point of view of the victim, then the first person of the assailant, it switches back and forth with the sort of superficial ease that speaks of a lot of planning.

The soundtrack howls and booms, the lighting rigs are put through their paces, the CG is eye-popping but sparingly used. It’s all expertly done, except perhaps for the finale, when Wan tries to turn all the knobs up to 11 and finds he’d already got to 11 at about the halfway mark.

Tons of fun. Just don’t think about the plot.

Malignant – Watch it/buy it at Amazon

What is a splatter movie?

And the Splat Pack?

A broad brush definition: American thirtysomething males who came of cinematic age in the 1980s. The most notable Splat Packers are Eli Roth (Hostel, Cabin Fever), Rob Zombie (House of a Thousand Corpses, The Devil’s Rejects), the writing/directing duo James Wan and Leigh Whannell (Saw) and token Brit Neil Marshall (The Descent, Dog Soldiers). They’re heavily influenced by cult classics such as Maniac (1980), Cannibal Holocaust (1985) and Bad Taste (1987), but also have a boy/man relish for utter junk like Caligula Reincarnated As Hitler (1986). Artistically they worship at the shrine of foreign masters such as Takashi Miike (Audition, Ichi The Killer) and they are currently presided over by Grindhouse auteurs and patron saints of schlock Robert Rodriguez (Sin City) and Quentin Tarantino (remember the brains all over the back of the car in Pulp Fiction?).

For the best gore since the genre fell from grace during the 1980s ‘video nasty’ scare, you can’t beat the Splat Packers. See Cabin Fever (death by flesh-eating virus), Hostel (eye-gouging, drill in the head), Ichi The Killer (giant needle through the chin), Saw (disembowelment, head blown off) or Wolf Creek (crucifixion). But gore is increasingly turning up in mainstream offerings too – see Resident Evil or the recent Underworld: Evolution starring fragrant Kate Beckinsale. There’s even an art-house variant for those who like Torture Porn with a foreign accent – see Coralie Trinh Thi’s Baise-Moi or Gaspar Noé’s Irréversible, starring Monica Bellucci.

An embrace by the art and mainstream crowds means only one thing – the genre is running out of steam. It’s also hard to top a scene in which someone’s face is blowtorched, the scorched eyeball is yanked from its socket and the dangly bits cut (the first Hostel film). But diehards will doubtless turn out for Wan and Whannell’s Dead Silence, about a possessed ventriloquist’s dummy; Cell, Eli Roth’s stab at a Stephen King story; and new boy Todd Lincoln’s Hack/Slash, which doesn’t really need a plot summary, does it? All come Certficate 18 guaranteed.