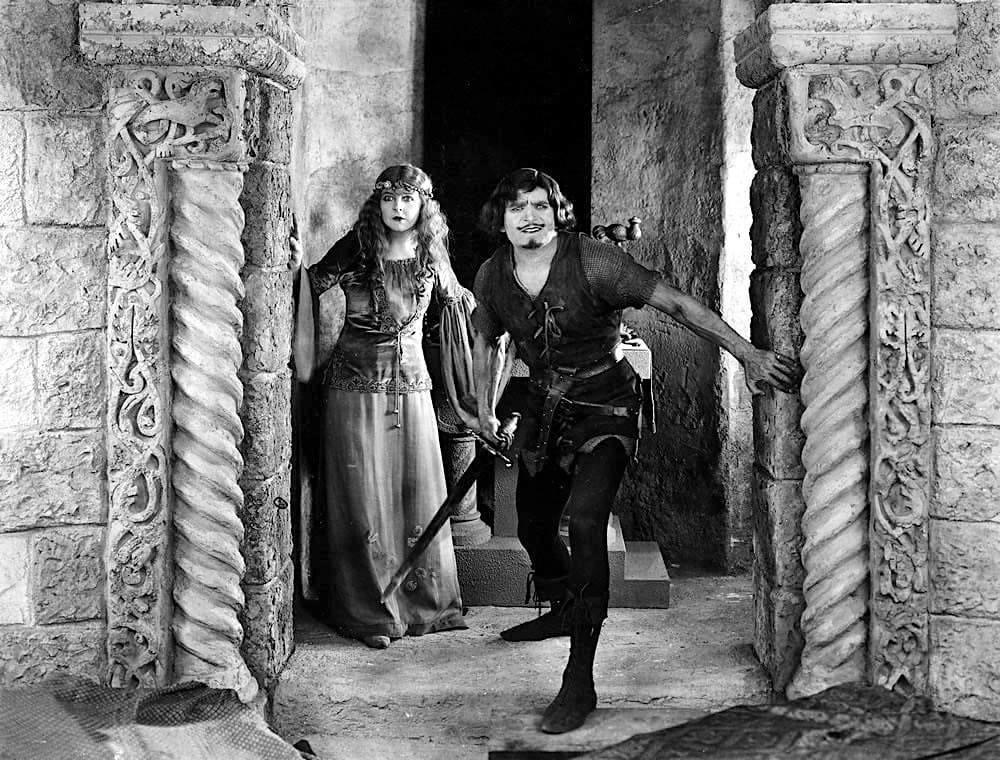 Accept no substitute. This is the original Robin Hood, or Douglas Fairbanks in Robin Hood (as the registered title insists), the one that Errol Flynn’s 1938 version modelled itself on, the one that gets all the Merry Men, Maid Marian, good King Richard and bad King John, Sir Guy of Gisbourne and the Sheriff of Nottingham into forms so recognisable that even at 100 years old, it’s instantly obvious who is who.

This wasn’t the first screen outing for the mythical character, in fact there had already been five before (if we include 1919’s My Lady Robin Hood), so Robin Hood as a movie character was at least fairly well known, though of course there had been plays, ballads and stories going back to medieval times. Doubtless it helped that at a time when the USA was emphasising its European roots, Robin Hood was English, white and Christian.

Robin Hood was the third of Fairbanks’s costume epics, and though both The Mark of Zorro and The Three Musketeers had been big successes, no one would fund the making of this enormously costly film. So Fairbanks financed it with his own money (breaking the number one rule of Hollywood), then went away to leave Lloyd Wright (son of architect Frank Lloyd Wright) to design the sets.

The story goes that Fairbanks was so intimidated by what he saw when he came back that he briefly cancelled the film. An over-reaction he was prevailed on to rethink by director Allan Dwan. Fairbanks’s reaction is understandable. The sets are the star of the film and are magnificence itself, particularly the massive medieval castle where much of the action takes place, and throw Fairbanks into the shade.

As to storyline, it’s pretty trad, apart from the fact that Robin Hood himself doesn’t appear for the first hour and a quarter. Instead, in “origin story” style, we learn about the Earl of Huntingdon – how he goes off to the Crusades with good King Richard, leaving the comely Lady Marian (Enid Bennett) behind under the watchful eye of the Earl’s squire (who later becomes Little John), how bad Prince John starts to wreak havoc on the land with torture and unfair taxation, how the Earl engineers his release from the King’s service and returns to save the land, by becoming Robin Hood and gathering his Merry outlaws. And how King Richard eventually returns triumphant to resume his rightful rule.

No scares there, then. You can’t say quite the same for the acting, which is “big”. The sets demand it, in a way, and silent movie stars did tend to be big – none bigger than Fairbanks (“it’s the pictures that got small” etc etc), who is all head thrown back, balled fists on hips, leaping about with his trademark physicality in remarkable displays of fitness, especially once he sheds Huntingdon’s chainmail and dons the familiar Robin Hood costume. Fairbanks, at 39, looks a touch old to be playing Robin Hood (or maybe Errol Flynn, aged 30 in 1938, is casting a backward shadow), but it’s generally a good cast. Wallace Beery plays a… yes, beery, laddish King Richard, a man of natural authority with strength and a voice to match. Enid Bennett is a waiflike, pre-Raphaelite Lady Marian, Alan Hale is great as the squire/Little John (so great, in fact, that he’d play the same role in the 1938 version), Sam de Grasse a lowering, glowering King John and Paul Dickey almost trumps them all as the properly sinister Sir Guy of Gisbourne, nemesis of Huntingdon, luster after Marian, aide to the wicked Prince John, a bad hat all round.

Allan Dwan’s film-making is precise and carefully controlled. The closer he brings his camera, the less he requires his actors to do. There’s a very nice scene where Robin (still Huntingdon at this point) woos Marian before setting off on the Crusade, all done in tiny gestures and with the sort of subtlety Fairbanks isn’t noted for. With the camera further back we get the standard-issue screen idol – look out for the fantasic bit where Robin slides down a huge tapestry/curtain, a stunt so good Jackie Chan would repurpose it in Police Story, one of his best films, where it was fantastic all over again.

Truth be told, the film is a bit long and a trim would improve it. Fewer scenes of general carousing or Merry Men jigging about excitedly in Sherwood Forest would make for a tauter drama all round.

As to the version I watched, Kino Lorber, it’s not bad, flickers a bit here and there and really should, by now, have been restored. There is no Blu-ray version. The sets alone are crying out for it. The Kino Lorber soundtrack comes across as a cost-cutting exercise. The music itself is fine, it’s the use of a synth to approximate (badly) an orchestra which doesn’t particularly work.

Perhaps, if a big restoration is ever done, it’ll get the treatment too.