The film France is a lot of things but let’s start with what it’s not. The IMDb says “comedy drama” – but there’s not even a smile to be had out of writer/director Bruno Dumont’s latest. Other suggestions out there include that it’s a satire on the news profession. This is hard to credit even as an idea, unless you’re entirely unaware of the way TV news reports are put together. Assembling “packages” from various takes, cutaways, drop-ins, and so on is not the same as “fake” news, which sets out to deceive rather than enlighten. The other strange notion doing the rounds is that France is a state-of-the-French-nation drama. Blame the title … Read more 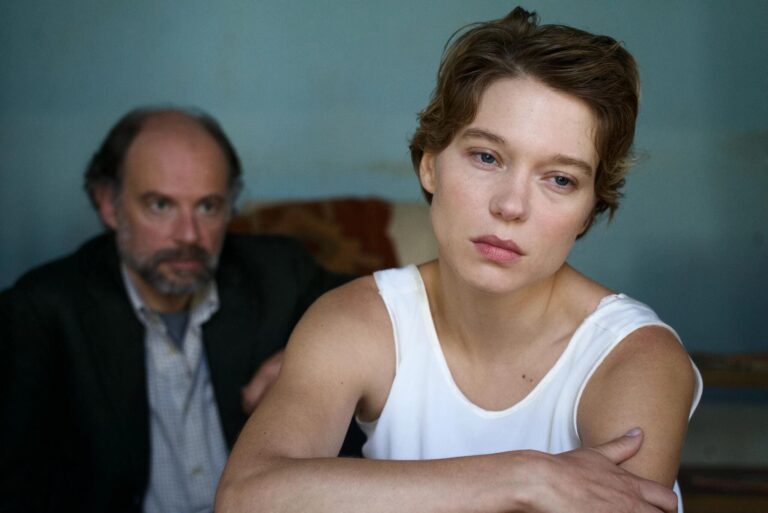 The last of the Great American Novelists of the 20th century, Philip Roth died in 2018, leaving behind a substantial body of work. Deception (Tromperie in the original French) adapts yet another of his novels for the screen, becoming yet another brave attempt at making a movie out of something that doesn’t really want to go there. In episodic instalments the plot tracks the on-off relationship between a smart, ageing but horny American novelist called Philip and a much younger English woman, called simply the English Lover. He’s played by Denis Podalydès, who makes Philip a confection of suaveté and savoir-faire plus a crucial dollop of self-doubt (otherwise too smug). She is played … Read more

David Cronenberg likes the title Crimes of the Future. He’s used it once before, for a film he made in 1970. He’s using it again here, 52 years later, but there’s no other connection between the two, at least on the surface. The 1970 is comedy sci-fi about a world without women, the 2022 recycling is good old-fashioned Cronenbergian body horror like he used to make. FYI, eXistenZ (1999), his last go at the genre he dominated in the 1980s and 90s, also had the working title Crimes of the Future. This Crimes of the Future’s origins go back to four years after eXistenZ, when Cronenberg was trying to put together a film … Read more

A middle finger to the haters, The French Dispatch finds an unrepentant Wes Anderson doubling down on the whimsy and pastiche of films like The Grand Budapest Hotel or The Life Aquatic with Steve Zissou. There’s more. An artist’s statement, done early on in Owen Wilson’s laconic voiceover, vouchsafes that “All grand beauties withhold their deepest secrets.” Secrets? Deepest? Anderson is all surface, surely? Anyhow, on to the Dispatch, which is an American magazine/supplement of New Yorker stripe run in the old way – a liberal institution headed by a steely eccentric (played by Bill Murray), never short of money and with enough space to contain at least one writer who doesn’t write, … Read more

A remembrance of Bonds past, No Time to Die is an evocative, elegiac farewell to Daniel Craig which also feels like a goodbye to the entire franchise – the familiar “James Bond will return” is there after the end credits, in case you need reassuring. It covers a lot of ground, flicks a lot of synapses not normally flicked by a Bond movie and is fascinating from first to last. All of the Craig Bond movies have played about with the Bond formula one way or another, but No Time to Die seems to have gone one step further, as if it wants to run two Bond movies in parallel – the one we … Read more