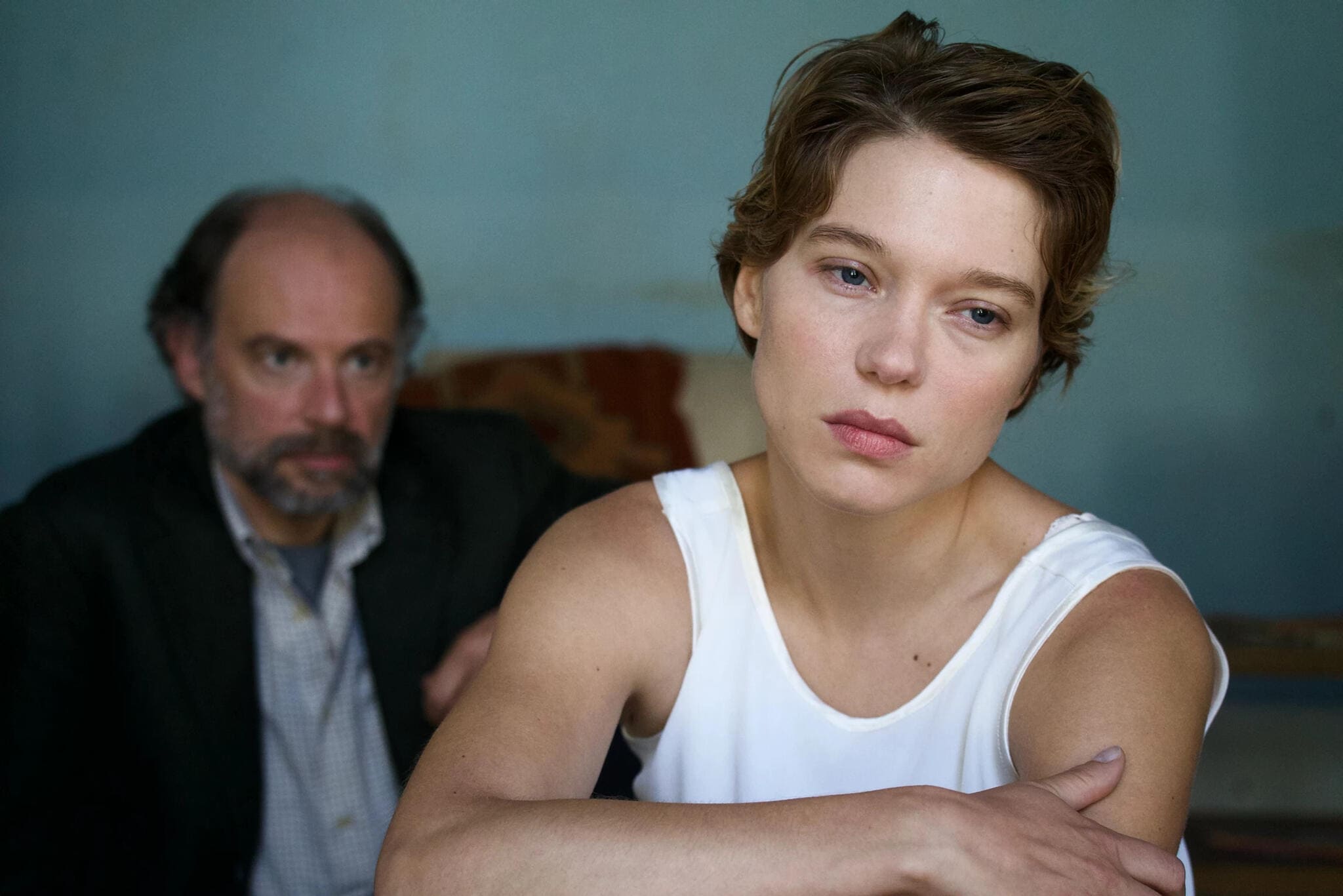 The last of the Great American Novelists of the 20th century, Philip Roth died in 2018, leaving behind a substantial body of work. Deception (Tromperie in the original French) adapts yet another of his novels for the screen, becoming yet another brave attempt at making a movie out of something that doesn’t really want to go there.

Both he and she are married. Both are entering into the affair for the adventure – we’re guessing – as much as for any emotional buzz. And between sessions of boffing each other, which happens off camera, and when he’s not writing (also off camera), they chew away at emotional bones, mostly the torture of being together while not being together, ageing, commitment, the difficulty of maintaining the thrill of a relationship amid the daily grind of just keeping the show on the road.

In flashback we see that Philip has previous. All of the women much younger, and in each relationship he’s the master to their muse, just the sort of relationships that you’d expect from the Great American Novelist.

Deception was an unusual novel because Roth gave his protagonist his own name for the first time. After a series of fictional stories in which older men had doomed but steamy relationships with much younger women, he effectively outed himself as a serial philanderer. (He got his defence in first but it didn’t protect him from the the revelations in Leaving a Doll’s House, a 1996 book by his ex-wife, Claire Bloom, which he spent the rest of his life trying, and largely failing, to refute.)

The track record on Roth on screen is not good. There was Portnoy’s Complaint in 1972, which made a fun and funny book into a leaden slog. 2003’s The Human Stain failed to wow anyone, in spite of having Anthony Hopkins and Nicole Kidman in leading roles. 2008’s Elegy starred Ben Kingsley and Penélope Cruz, who never quite gelled. James Schamus’s Indignation (2016) is probably the best Roth adaptation to date, though I’ve not seen Ewan McGregor’s feature debut as director, an adaptation of Roth’s state-of-the-nation opus American Pastoral (reviews were mixed).

Here’s the thing. Roth might be a brilliant writer but that doesn’t make him necessarily brilliant for the screen. Psychology and style don’t do well when they’re lifted from the page. Things get lost in translation.

Director/adaptor Arnaud Desplechin knows this. He’d tried to make Deception before and had failed to come up with a way of of making what’s essentially two people talking into visually convincing film. Then, at Roth’s prompting, he had a second go. He pulls out the stops, switching about the visuals for the encounters between him and her – in the snow, on a vast tartan carpet, in front of French windows, shooting sharp and close, pulling back, keeping the camera agile, fading to black with iris shots.

Even so, for all the decorative stuff, the overall effect is a bit like watching a dinner party conversation punctuated with occasional nudity. Fay Weldon in the New York Times Book Review described the original novel as “literary navel gazing” before going on to praise it lavishly – “extraordinary, elegant, disturbing”. It was the writing she liked.

Eventually, and against all the odds, Desplechin’s film gets part of the way there too, thanks to a late-stage injection of actual human drama – in a fantasy sequence Philip is put on a Kafkaesque show trial and all the criticisms aimed at Roth in his lifetime (misogyny, sexism, caricature, sexually inappropriate behaviour) are levelled at Philip. Later, his wife (Anouk Grinberg) lets rip with her unhappiness. Nor is the English Lover ecstatic when she reads the book Philip eventually produces, the one he was working when they weren’t having their assignations. It’s described on a poster at a book signing as “extraordinary, elegant, disturbing”.

No one ever says “god, it’s all about you all the time, isn’t it?” in Deception, but it is. Philip the entitled, the mansplainy, the egotistical, the self-obsessed. Desplechin’s astute conceptual breakthrough is to tilt it the other way, towards her. And thanks to Seydoux he pulls it off, not by a mile but by a whisker. But pull it off he does. Neat trick. Good work.

Deception – Watch it/buy it at Amazon