A friend of mine used to know Sean Ellis, the director of Metro Manila, when he was an assistant to photographer Nick Knight. And there being nothing quite so irksome as the success of those even halfway close to us – I’m kidding, though not much – I was prepared to hate this, Ellis’s film debut, and was ready to file it alongside the many other failed attempts by stills photographers to join the movie guys. I was wrong. This is a great film. Made with a keen eye for detail though not photographically showy at all – the usual curse – it follows a dirt-poor Filipino family into the big bad city, where they are scammed, punked and hornswoggled to the point of destitution. Mum ends up working in a dancing bar, where the nine-year-old daughter is being eyed by the bar owner as a whore in waiting. Dad, after a few false starts, gets a job working as a bullion driver. And here is where the film takes wing, as it morphs into a thriller following the naive ex-farmer as he is groomed for something dubious by his fellow security guys. That’s enough plot to give a flavour of a film that’s not the misery-fest its “poor refugees from out of town” opening scenes suggest, a fact reinforced by Jake Macapagal’s constantly evolving and remarkably natural performance as the green rookie with hidden depths.

Woody Allen changes tack with something approaching a socially engaged drama, about a super-entitled rich bitch (Cate Blanchett) learning to slum it with her sister (Sally Hawkins) after her life with crooked wheeler-dealer Alec Baldwin (who better?) has come crashing down. “He lived like a big shot on other people’s money,” says Hawkins a propos Baldwin in a film that might be about the recent financial crash and how those who experienced it are gearing up for a round two.

And it at least tangentially is, though Allen is after something else in his portrait of Jasmine – a fantasist who may not know much but she does know that self-delusion plus money looks very much like self-belief. Things go better with cash. Even the human mindset.

Blanchett’s performance as the teary Xanax- and Stoli-quaffing monster is interesting – she’s clearly overacting just enough to get Oscar interested (which has proved to be the case). Much better is Sally Hawkins as Ginger, her decent but exasperated sister, in a thankless role as the one who stayed close to her working class roots and is therefore blameless.

So who’s the bad guy here? Jasmine – who struggled to escape, and is even now, desperate and busted, going to night school to try and escape again? Or Ginger – who stayed and is about marry a big-mouthed cartoon Italian (Bobby Cannavale) who is only three days away from sitting around all day in a singlet and shouting at her?

Johnny Knoxville works the “same but different” groove in this spin-off from Jackass that adds a gotcha plot to the stunts he used to pull with Wee Man, Steve-O and Bam Margera. Ostensibly a drama about an old guy on a cross-country trek with his grandson, the film parks this concept about every ten minutes for scenes that involve Knoxville in deep disguise as Bad Grandpa getting into the sort of scrapes that ask a lot of the great American public.

The great American public mostly come through. But it’s when they don’t that the film gets really interesting and Knoxville’s bravery becomes most apparent.

So, the opening scene of him getting his dick caught in a soda machine, and passers-by alternately trying to help or point and laugh, that’s a gently amusing warm-up. But the sequence where supposedly 80-year-old Grandpa starts undressing in a bar full of women waiting to be entertained by oiled black bucks, that’s through-the-fingers funny. Especially when Bad Grandpa’s impossibly low-hanging balls start swinging, the women start screaming and the dancers start lining up to take a swing back.

Accompanying him on this frequently hilarious journey is Jackson Nicoll, a fearless nine-year-old who thinks nothing of telling people in a doctor’s waiting room that his mother is a meth whore, but whose big moment comes when he gets into disguise and enters a pageant for pre-pubescent girls.

“I’ll switch off when it stops being funny,” I told myself at the start of Bad Grandpa. I watched to the end.

This Ain’t California is a drama posing as a documentary. Not a mockumentary seeking to poke fun, not a pretend found-footage affair, but a film that goes out of its way to pose as a documentary about a bunch of East Germans, now around 40, meeting up to discuss their youth. In particular the youth of one of their number, Denis aka Panik, a 1980s kid who became a skateboarding legend on the streets of East Berlin, where disapproving passers-by would shout the German equivalent of “this ain’t California”.

The local secret police, the Stasi, weren’t too happy about the bleach-blond hair, the cap-sleeve shirts and the slaloming through the cityscape either, though as one of Panik’s old mates points out, skateboarding and the communist East weren’t that out of sync – kids have always liked things that roll “and there certainly wasn’t a shortage of concrete.”

Panik’s rise to urban notoriety is one half of the story, the other less obvious half is Panik’s now 40something friends who have spent evenly lives evenly split between communism and capitalism. They’re an interesting exercise in compare and contrast, which is precisely what they do in scenes around the camp fire when they’re not reminiscing about Panik.

On top of all this is the familiar story of communism brought down by Levis, aka consumer expectations that the state couldn’t meet. Some people won’t like the fact that Marten Persiel’s film looks like a documentary (I jotted down “is this for real?” in my notes only halfway through), some won’t notice. It’s a good story well told which ever way you lean.

This Ain’t California – at Amazon

The rise and fall of Julian Assange – the founder of Wikileaks whose outing of corrupt Icelandic bankers, Swiss technocrats enabling super-rich tax-dodgers, and the helicopter crew who fired on unarmed journalists in Afghanistan made him a pop-up pop hero.

Bill Condon’s film is based on the book of former Wikileaks number two Daniel Domscheit-Berg (played here with his usual intelligence by Daniel Brühl).

On to Benedict Cumberbatch, as Assange, so convincing that within five seconds of his first appearance as the white wizard of Wikileaks it might as well be the man himself. Which will doubtless make Assange fume.

What will make Assange fume even more is the pseudo-interview with Assange (ie Cumberbatch) right at the end, who launches a tirade against a film that he (ie Cumberbatch as Assange, though it is Assange’s stated view too) claims was out to get him. Just one of many ploys designed to persuade us that the film isn’t out to get him, that we’re watching an even-handed drama, and that the man himself has been given some right of reply.

On top of all this, let’s note that the film makes no mention of those Swedish rape allegations etc – so it must be on Assange’s side, right? Not quite. Note how every single person in this film who isn’t called Assange seems to be on the side of virtue – and that includes Laura Linney as a bright, smart and trustworthy US government wonk and her measured, considerate sidekick Stanley Tucci (who does precisely nothing, but does it brilliantly, as usual) – journalists, fellow Wikileaks personnel, in fact everyone is just so wholesome and decent.

What we’re getting here, in short, is a hatchet job, though a fascinating one, because it works so hard yet so subtly to hide its true nature. And it’s a good thing the process is so fascinating because watching people tapping on screens and doing the West Wing walk-and-talk does begin to pall after a while.

The Fifth Estate – at Amazon

Don Coscarelli hasn’t made a film since 2002’s Bubba Ho-Tep, which was a comic horror imagining a retired Elvis and an elderly JFK (who is incidentally black) being monstered by a mummy in an old folks home.

John Dies at the End shows Coscarelli hasn’t lost his sense of the absurd, since this one features a young black character called Robert Marley, a dealer of a drug called Soy Sauce that seems to bend the time/space continuum in all sorts of weird shapes.

There’s not much point laying out too many plot details, apart from to say that Chase Williamson and Rob Mayes play a pair of young ghostbusting paranormalists who have ingested some of this Soy Sauce and are now finding that door handles turn into penises, a telephone conversation can be had by picking up a bratwurst, and that frozen meat has developed a tendency to assemble itself into some sort of chill-cabinet zombie monster thing.

This is in fact just the beginning – talking dogs, cops with exploding eyeballs, white fuzz “infecting every man, woman and child”.

John Dies at the End is an incoherent bag of a billion mad ADHD ideas but it lacks, same as Bubba Ho-Tep, an organising intelligence. If you are on Soy Sauce yourself, you might love it.

John Dies at the End – at Amazon

A contender for the best musical out of France ever, Jacques Demy’s 1964 film, the second of a romantic trilogy (1961’s Lola and 1967’s The Young Girls of Rochefort are the other two), is also a brilliant showcase for the music of Michel Legrand.

If you know Legrand from The Windmills of Your Mind (theme to both versions of The Thomas Crown Affair), his aching, string-driven score to this teary romance won’t be unfamiliar. And there’s plenty of it, because Cherbourg is entirely sung through, like an opera – no spoken speech whatsoever. Think Les Misérables, but better.

As for the plot, that’s operatic too – beautiful young Geneviève (Catherine Deneueve) falls in love with her handsome lover Guy, who is promptly shipped off to fight in the war in Algeria, leaving the whoops-pregnant young girl to the machinations of her mother, who quickly marries her off to that nice Roland (Marc Michel) who has been making big rich eyes at her.

If opera isn’t your bag, don’t worry too much. The colour co-ordinated sets and costumes are clearly inspired by the work of Hollywood greats such as Stanley Donen and Vincente Minnelli. The singing is glorious too, though Deneuve herself does not sing. In fact all the key players are dubbed, but then so was Audrey Hepburn in My Fair Lady and it didn’t do that film any harm.

Scanned from three black and white separation masters which Demy had had struck because he knew the Eastmancolor was going to fade, this 50th anniversary restoration is as good as it’s ever going to look. And if it’s not as contrasty or solid as Technicolor, that’s maybe appopriate for a very pastel-coloured film featuring a fragile-looking lead in Deneuve and powered by a plot about love not conquering all.

The Umbrellas of Cherbourg – at Amazon 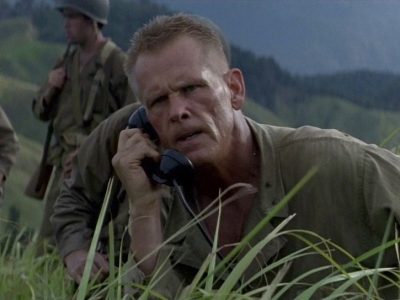 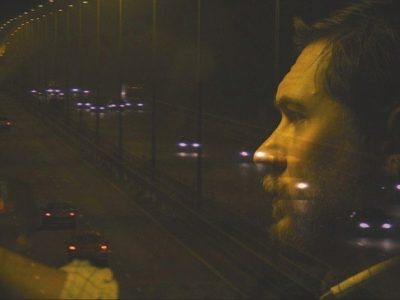 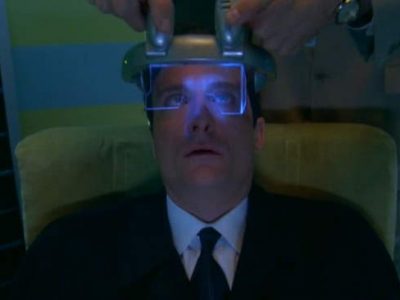