On this day in 1941, the president of the USA, Franklin Delano Roosevelt, delivered what has become known as the Four Freedoms Speech. Addressing the US Congress in the annual State of the Union speech, Roosevelt outlined what he believed those four freedoms to be – Freedom of speech, freedom of worship, freedom from want, freedom from fear. The speech was significant for several reasons. First, it sought to extend the freedoms already guaranteed by the Constitution (speech and worship) with freedoms which more problematically lined up with a more progressive, interventionist, Democrat view of the role of government. Second, it sought to suggest that these four aspirations should be universal. Which, in the short term, gave the US the moral and philosophical justification for entering the Second World War – at some level this was the idea of the speech in the first place. Ironically, strongly disputed and resisted by conservatives at the time, who saw the Four Freedoms as an unnecessary widening of the power for the state, it was later on conservatives who would most readily reach for something similar to this doctrine as they sought to “spread freedom and democracy throughout the globe” (as Condoleeza Rice put it in 2005) in one military adventure or another. The Four Freedoms speech signals a shift in US foreign policy, from isolationist to interventionist. They were also eventually incorporated into the United Nations Declaration of Human Rights.

When James Cagney made Yankee Doodle Dandy in 1942, most of the world knew him as the butt of a thousand “you dirty rat” impersonations, thanks to gangster roles in movies such as The Public Enemy and Angels with Dirty Faces. Imagine their surprise when this biopic of the legendary Broadway showman George M Cohan debuted, with Cagney in the lead role, apparently singing and tap-dancing like a man born to the part. Cagney had in fact been a dancer in his stage days, but had only danced once on film, in 1933’s Footlight Parade, a Busby Berkeley extravaganza. And, truth be told, he’s not really dancing here either. In fact he’s doing something that could be described as a close approximation, in the same way he’s closely approximating singing, in his portrayal of Cohan, the greasepaint legend called out of retirement in this biopic by FDR, to whom Cohan then tells his life story. The film unfolds as a gigantic sequence of flashbacks, which allows it to jump from one wisecracking, upbeat, cock-of-the-walk sequence to the next. And this is where Cagney excels, as the stage guy whose body telegraphs movements right out to the back row, as the board-treader who never whispers when he can roar. Cagney’s is a jack-in-the-box performance, and he’s the ideal lubricant between the schmaltzy flag-waving sentiment (this was wartime, remember) and the big feathers-and-flounce musical numbers which punctuate ever biographical turn. If the name Cohan is leaving you none the wiser, he’s the guy who wrote Give My Regards to Broadway, Over There and Yankee Doodle Boy. And if that still leaves you nonplussed, just watch the film and enjoy the sight of a dirty rat singing and dancing his way to an Oscar. 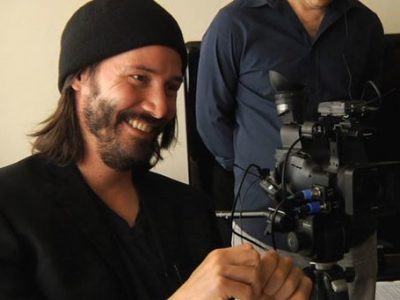 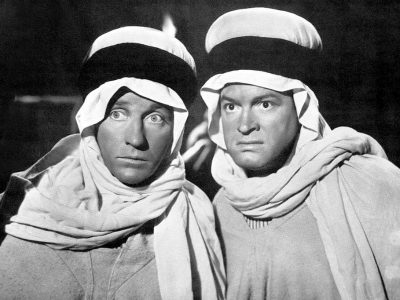 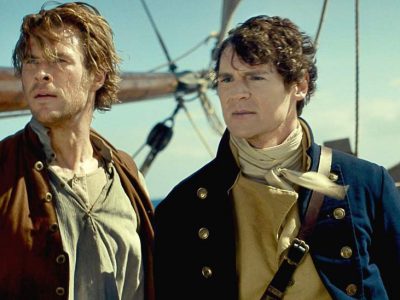