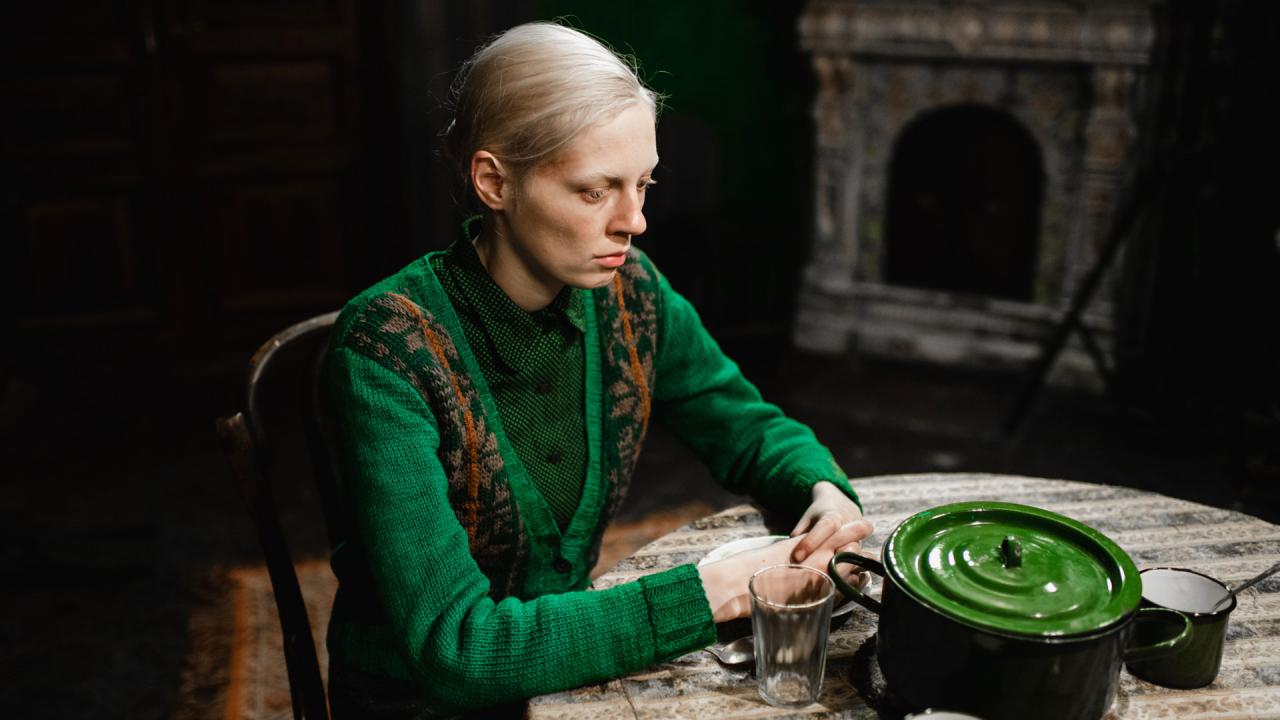 Beanpole (Dylda) is an obsessively observed, massively ambitious Russian film set in the aftermath of the siege of Leningrad which tells its story of lives brutalised by war from the point of view of two young women. It won Kantemir Balagov the best director gong at Cannes in the Un Certain Regard category. That’s the one for young directors doing ambitious or unusual work, which puts Beanpole in the company of films such as Dogtooth, The Death of Mr Lazarescu, White God and Rams – classics all. Balagov, a onetime student of Alexander Sokurov, had already picked up the FIPRESCI prize at Cannes two years earlier, when he was only 26, with his debut, Closeness. Clearly a young man in a hurry, he took his inspiration for Beanpole from Svetlana Alexievich’s book The Unwomanly Face of War, which could just as easily have been this film’s title.

So much for the background, on to the film. It’s a story about two women who have somehow survived the war and now have to adapt to the peace. Beanpole (Viktoria Miroshnichenko), real name Iya, is skinny and shy and given to catatonic episodes that lock her out of her own body. Masha (Vasilisa Perelygina) is the warmer and earthier of the two, a mother whose young child dies early on as a result of a horrible accident caused by one of Beanpole’s episodes.

It’s grim viewing, but it’s Masha’s reaction to this horror that is surprising. War-annealed, she decides that what she needs is another child, and straight away. But thanks to a wartime “shrapnel” wound (she says, we suspect a botched abortion), she cannot have any more, and so Beanpole, averse to physical contact of all sorts, is pressed into service as a surrogate, and a doctor at the hospital where the two of them now work as nurses becomes the unwitting sperm donor. Masha, meanwhile, is striking up a relationship with Sasha (Igor Shirokov), a pasty kid from a good family who she fucks in a car.

An exploration of the bizarre behaviour people exhibit when in extremis, Beanpole is full of characters with skeletons rattling around in their closet. How did the young women get through the war when so many died? Is the doctor at the hospital up to something that would have been more acceptable during wartime but is now unethical? Are happy endings possible when life has ripped out the usual foundations for it?

Balagov connects up all the “scenes from the aftermath of a war” in an almost incidental way but with a fanatical eye for detail. One of the great strengths of this film is its extraordinary look, so drab and grey outside (the exhausted male realm), but vivid almost to the point of combustion in the fecund interiors – the yellow of the lights, the bright hues of dyed wool, the flames of fires, even the varnish on wood and yellowed newspaper are all whisked together to the point where the plot almost seems to be in the service of the look.

Almost. In fact Balagov (and co-writer Alexander Terekhov) spin a carefully crafted story in which what seems what seems incidental in one scene becomes pivotal further along. In Beanpole we are rewarded for our persistence with moments of sudden dramatic and emotional weight, some of them quite unsettling.

Women have all the focus here, and where men feature they are often coming off second best. At one point Beanpole heads off with a man for, we assume, a fumble in the corner. He comes back with a broken arm. And it’s women who make all the decisive decisions, which leads us to the film’s best (of many) set pieces, when Sasha takes Masha home to meet Mama, and Mama turns out to be an impromptu judge and jury in a reckoning with the actions of the desperate in moments of high jeopardy.

Beanpole – Watch it/buy it at Amazon

Director: Kantemir BalagovWriter: Kantemir Balagov, Aleksandr TerekhovStars: Viktoria Miroshnichenko, Vasilisa Perelygina, Andrey BykovSummary: 1945, Leningrad. World War II has devastated the city, demolishing its buildings and leaving its citizens in tatters, physically and mentally. Although the siege - one of the worst in history - is finally over, life and death continue their battle in the wreckage that remains. Two young women, Iya and Masha, search for meaning and hope in the struggle to rebuild their lives amongst the ruins. 26-year-old Kantemir Balagov follows TESNOTA, winner of the FIPRESCI Prize at the 2017 Cannes Film Festival, with a powerful period drama.