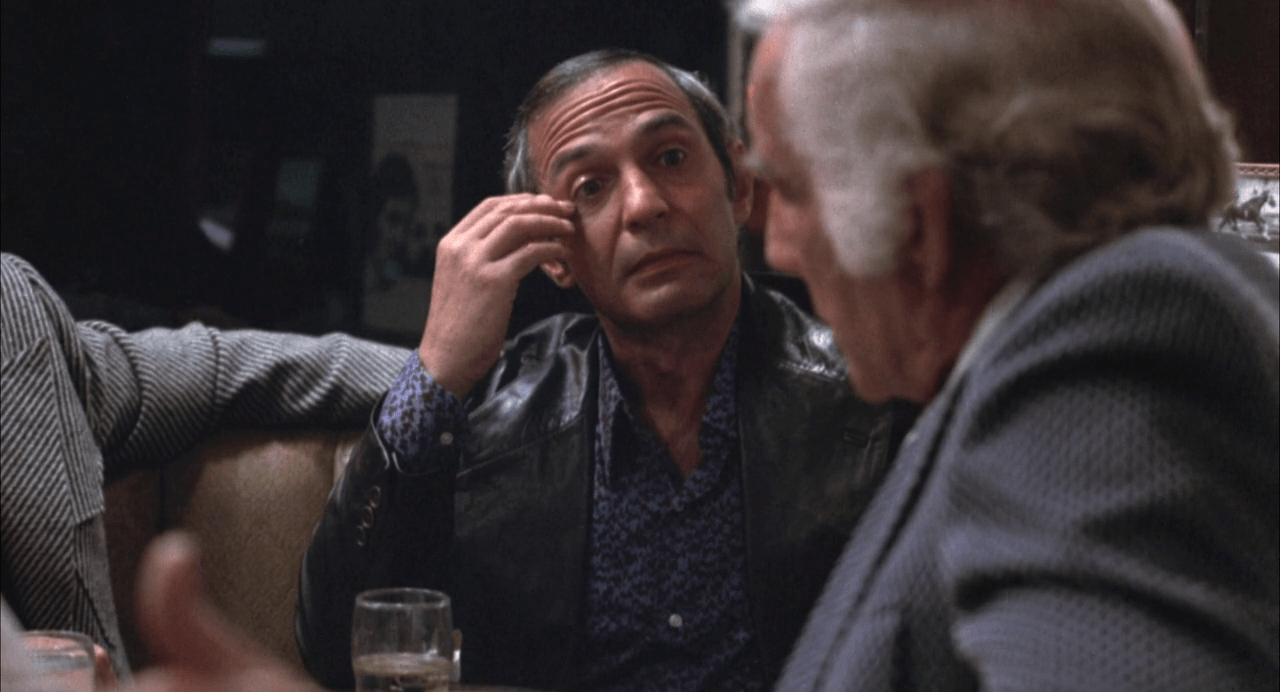 The Killing of a Chinese Bookie

The world is at Peak Ben Gazzarra and Peak John Cassavetes in The Killing of a Chinese Bookie, a neo-noir from 1976 full of techniques – handheld camera, sparse (if any) lighting, crash editing, semi-improv – that seemed weird at the time but have since been absorbed into mainstream film-making.

Cassavetes had worked on the early stages of the film with Martin Scorsese (a protégé) and there are parallels with the style and content of Mean Streets – a “hey we’re just guys talking” aspect to the storytelling and a loose shooting style which Cassavetes pushes a lot further than Scorsese. Here, the camera often becomes more obviously subjective and emotional, the image swinging about madly when things get fraught and occasionally dissolving into incoherence. And Cassavetes just drops straight into the story without too much in the way of formal establishing of character or locale.

Instead we learn gradually who this Cosmo Vittellis character is that Gazzarra is playing. He’s the owner of a strip joint whose personality and sense of personal worth, it gradually becomes clear, is tied up entirely with his business. Being the owner gives him his status in life, seigneurial privileges and a licence to behave in a proprietorial though courtly manner – he takes his dancers out, charms their parents, introduces the “girls” to champagne in his limo. Pats on the bottom but a good boss… as long as everything is on his terms.

This is possibly Cosmo’s tragic flaw, but he has a more obvious one. A gambling problem, which the syndicate he owes the money to decide to turn to their advantage by getting Cosmo to kill a Chinese bookie who’s in their way, fully expecting Cosmo to get caught and for them to take over the running of his club. Things don’t work out quite that way. Or maybe they do ultimately, it’s uncertain.

Gazzarra once said that he didn’t like the original edit, finding it too long at 135 minutes. Nor did the public much and Cassavetes returned to The Killing of a Chinese Bookie in 1978 and cut it back to 108 minutes. Watching the longer version (both are on Criterion’s two-disc set) it’s easy to see where some easy cuts could be made – in the elaborate extended scenes featuring the Crazy Horse West’s stage show, which tell us much about Cosmo’s aspirations (high tone, European, a touch of Weimar) but don’t advance the plot an awful lot.

Cassavetes films often centre on characters who don’t fully understand the mess they’re in, and that’s the case here. Gazzarra, often improvising, is a commanding presence, entirely “the boss” of the Crazy Horse West as he’s meant to be, and in scenes where he’s being outchiefed, like when the syndicate arrive unannouced at his club to put the shake on him, watching Cosmo yielding while simultaneously trying to hold his ground is to see a great actor at work. Frequently Gazzarra is operating at two levels – as the Cosmo he wants the world to see and as the more fragile one beneath.

It’s film noir, obviously – the nighttime setting, the seedy strip joint, guns and gangsters – but it’s a more elliptical noir than many, and the “female as trouble” aspect doesn’t stand up to much scrutiny. The fact that it’s Cassavetes’s most popular film AND his least typical one is problematical if you’re in the business of bigging up the indie guru, but Cassavetes, like Cosmo (with whom he identified), is also operating at two levels, delivering a film that breaks free of the strictures of Hollywood genre and yet follows the template. It makes for entirely fascinating viewing.

I watched Criterion’s lovely digital restoration and it’s worth it. Camerawork this febrile needs all the help it can get. I didn’t spot David Bowie, still in his nuts-on-cocaine years, who is meant to be in the crowd at the Crazy Horse West somewhere. Maybe you will.

Director: John CassavetesWriter: John CassavetesStars: Ben Gazzara, Timothy Carey, Seymour CasselSummary: Cosmo Vitelli owns the Crazy Horse West, a strip joint in Los Angeles. He's laconic, vet, and a gambler. When we meet him, he's making his last payment on a gambling debt, after which, he promptly loses $23,000 playing poker. The guys he owes this time aren't so friendly, pressuring him for immediate payment. When he's not able to do so, they suggest he kill a Chinese bookie to wipe away his debt. Vitelli and the film move back and forth between the double-crossing, murderous insincerity of the gamblers and the friendships, sweetness, and even love among Vitelli, the dancers, a dancer's mother, and the club's singer, Mr. Sophistication. —<jhailey@hotmail.com>