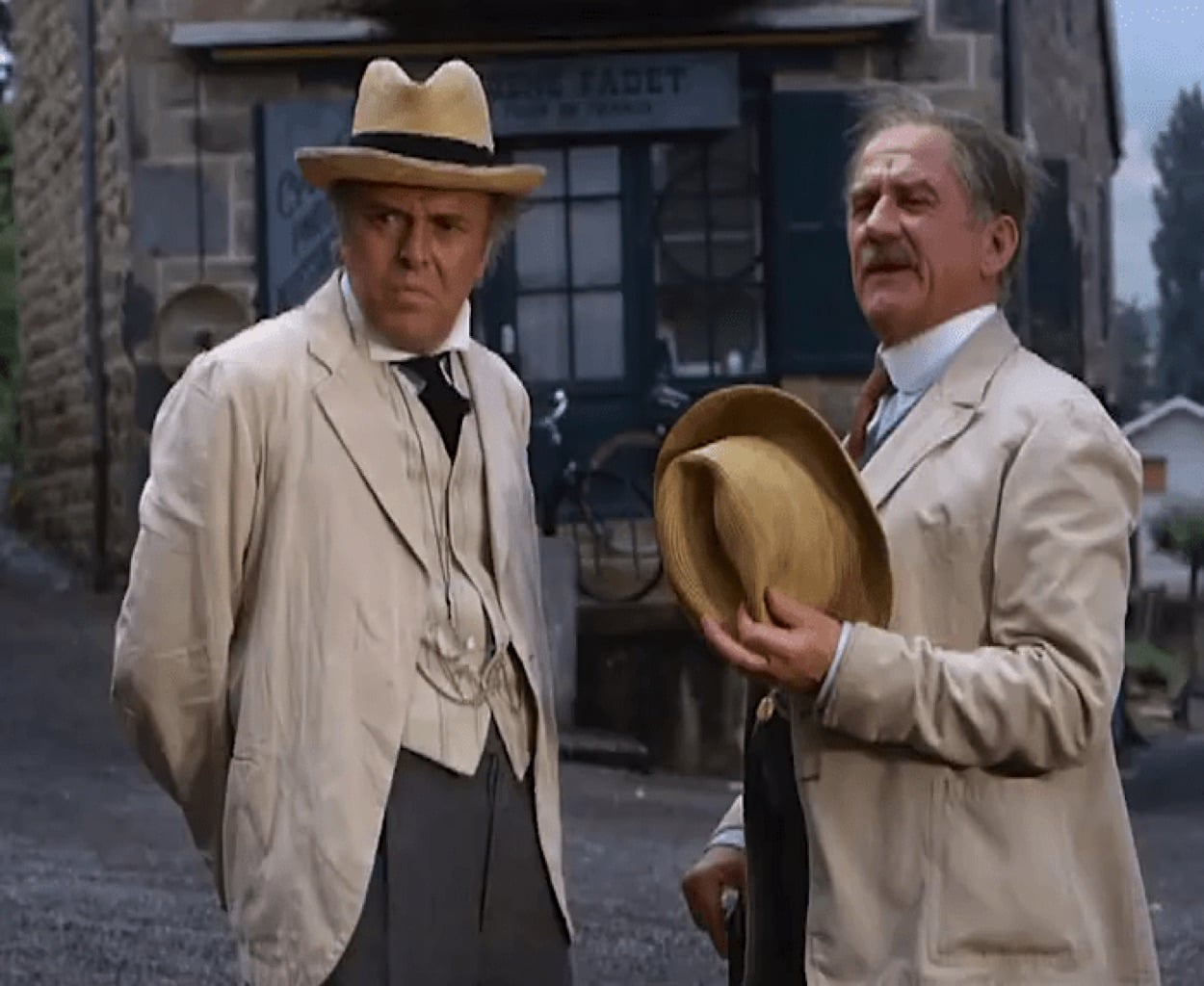 Broadcast in 1972, the same year it was agreed that the UK would join the European Common Market, Clochemerle caused a stir when it was first shown. That’s because this charming show was all about a urinal. This pissoir (the word is never used) is erected in a small French village by the progressive mayor and town clerk, and causes ructions after the forces of conservatism decide it’s an affront to deceny and campaign to have it taken down.

It was an unusual TV show in many respects. It was an international collaboration (with West German TV) in an era when such things were rare. It was an adaptation of a French comic novel no one in the UK had heard of. It was shot on location in France, using English-speaking actors. It was shot on film, using a single camera setup rare in TV comedy at the time. And it was adapted by Ray Galton and Alan Simpson, whose comedies to date – various TV shows with the lugubrious Tony Hancock, the rag-and-bone-man comedy Steptoe and Son, scripts for the likes of Frankie Howerd – marked them out as masters of the gag, albeit ones delivered by strong characters. Clochemerle is a comedy of manners and is entirely character driven. Gags are rare. (Sabine Seifert, who is listed on the IMDb, reworked the dialogue for German TV). Galton and Simpson had originally bought the rights to the book intending to make a musical out of it, with Lennon and McCartney doing the music. That didn’t happen, the rights lapsed and the BBC snapped them up. On the day they bought them the BBC got in touch with… Galton and Simpson and asked them to do an adaptation of a book they’d already been considering. And here it is.

Most unusual, for British TV of the era, was the tone. Rather than mocking the French, finding them either too stereotypically Latin, too lusty or too interested in garlic and snails, it takes the French view of provincial French life. Which is also mocking, it must be said, but it’s based on a solid appreciation of the joys of the small town and is respectful of the French way of life. It’s not ’Allo ’Allo, the British TV series from ten years later which played up all the “ooh la la” in mock French accents.

It wasn’t the first adaptation. Gabriel Chevallier’s original comic novel was first published in 1934 to great acclaim. Translated into most of the world’s languages, it has sold millions of copies. There’s a 1948 French film adaptation, directed by Pierre Chenal, a 1993 Russian movie and even a 21st-century version, from 2004, also from France.

All set the action where Chevallier did, in the 1920s, in the wine-producing area of Clochemerle-en-Beaujolais. This version was shot in the town of Marchampt, though Chevallier originally based Clochemerle on the commune of Vaux-en-Beaujolais, which continues to use the connection for purposes of tourism.

In nine half-hour instalments, all narrated in a raised-eyebrow tone of voice by Peter Ustinov, the story unfolds – the progressive, republican mayor Barthelemy Piechut (Cyril Cusack) and his halitotic clerk Ernest Tafardel (Kenneth Griffith) decide to install a pissoir, to stop the male townsfolk from relieving themselves willy-nilly, a development fiercely opposed by conservative, catholic busybody/spinster Justine Putet (Wendy Hiller). She, pulling strings and making a nuisance of herself, manages to weaponise the dispute, escalating it to the point where the government ends up sending the army in, under the command of the martinet Captain Tardinaux (Nigel Green, in his final screen appearance, dead, presumably suicide, six weeks after transmission).

En route to the grand showdown, and this is what the show is really about, are little sketches of smalltown life. The curé (Roy Dotrice) who is prey to sins of the flesh. The shopkeeper (Freddie Earlie) and his lusty wife Judith (Catherine Rouvel), who is having an affair right under his nose with local libertine Hippolyte Foncimange (Christian Roberts). The innkeeper (Barry Linehan) and his lusty wife Adele (Cyd Hayman), Judith’s sworn rival in all matters of beauty and va-va-voom. The local aristo, Baroness Courtebiche (Micheline Presle), who “considers god her equal”. The virginal Rose Bivaque (Georgina Moon) sharing carnal secrets with a soldier. An ageing cyclist who once did OK in the Tour de France. The church beadle (Bernard Bresslaw) and his absurd costume.

Much of it is to do with sex – lusty women, cuckolded men – and there’s a kind of rabelaisian Greek chorus/commentary maintained by the local washerwomen, whose breasts swing in their loose fitting tops as they pound the dirt out of the clothes at the washhouse. But more than sex it’s self-importance that’s the target, whether it’s the cyclist, the spinster, the mayor or the captain. Sex in Clochemerle is a great undoer of pomposity. Almost everyone, at one point or another, falls victim to its promptings.

The jaunty theme and incidental music are played by L’Harmonie du Rhône, a brass band from Lyon. The acting, by seasoned and well known performers, is precise and about a third of the way along the road to pantomime. Think Jacques Tati or Fernandel. It’s briskly, economically and classically directed by TV veteran Michael Mills (though the original picture quality has been lost somewhere down the decades. Was it re-transferred to tape?) and if it seems dated, it’s worth remembering that it was dated all those decades ago too.

Incidentally, there’s a comment on Amazon – “Excellent TV series. Should be repeated on BBC” – by one Christian Roberts. Is it the same Christian Roberts who played Hippolyte Foncimange? It’s almost Clochemerlian if so. Either way, he’s right. It should.

Clochemerle – Watch it/buy it at Amazon