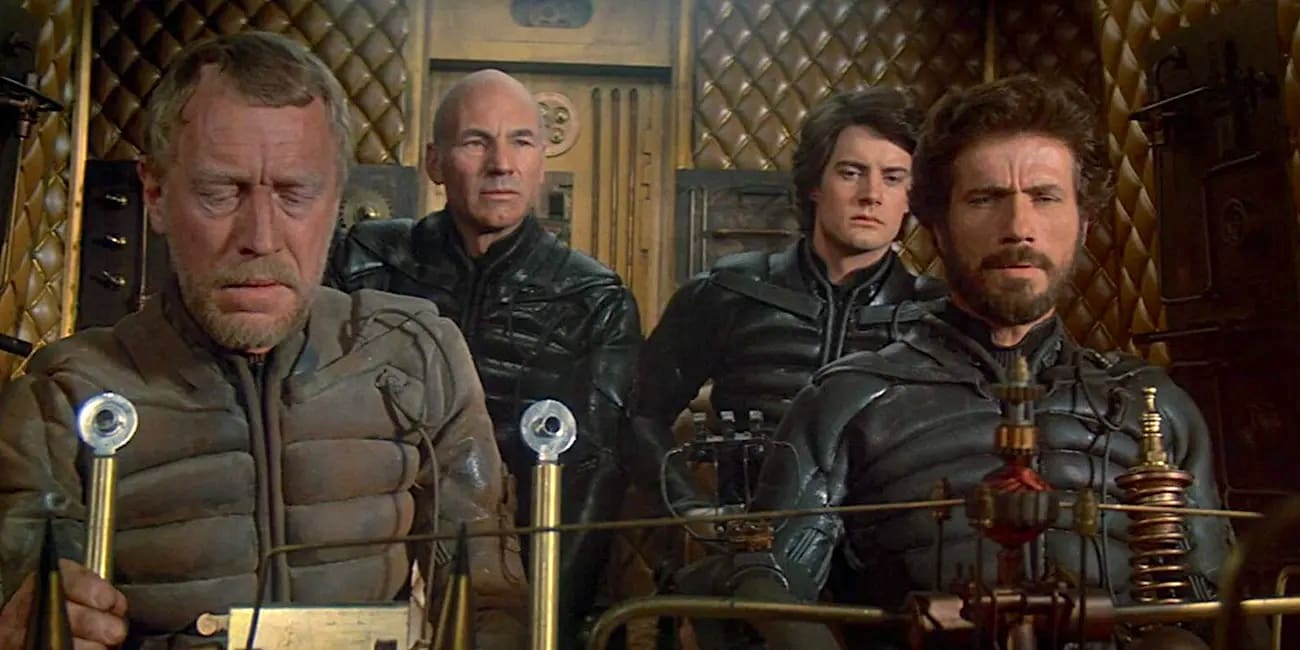 Dune. Not Denis Villeneuve’s 2021 behemoth, that pleasure still awaits. But David Lynch’s 1984 version, the only film in his career that he wished he hadn’t made and will not talk about in interviews, except to say he shouldn’t have made it.

And not the theatrical version either, but the “extended” one worked up for TV so it could be shown in two 90 minute chunks. Lynch hated this one so much he had his name taken off the credits. So welcome to another “Alan Smithee film”.

Acutally Lynch originally had a four-hour cut in mind but had managed to get the running time down to three hours. Not short enough for his producers, who were worried that anything over two hours and 17 minutes would mean one fewer showing per day in the cinemas. And so two hours 17 minutes it is, and comprehensibility be damned. Which is why I turned to the TV version, hoping against hope that three hours would fill in some of the gaps.

The vastly sprawling plot can be distilled down to: the Emperor Shaddam IV (Jose Ferrer), anxious that his barons are gaining in power, sets two houses – Harkonnen (boo) and Atreides (hooray) – against each other in a divide-and-rule contest over who will control the mining and trade of Spice, a magical substance with bitcoin-meets-crack allure found only on the planet Arrakis (aka Dune), a sandy waste where killer monster sandworms hold sway.

Think of Harkonnen as the Empire and Atreides as the Rebel Alliance, if you want a Star Wars hook to hang this film on, and young Paul Atreides (Kyle MacLachlan in his debut) as a Luke Skywalker type growing in stature from callow youth to mighty warrior as he faces down the Harkonnen and uncovers the Emperor’s treachery.

Both Star Wars and Dune are in hock visually to the 1930s Flash Gordon films but David Lynch seems to have been drinking deeper from the cup than George Lucas ever did. The faintly militaristic look, the art nouveau styling, the hair just so, the way everyone speaks in awed sci-fi tones about concepts that must be everyday to them, that all connects directly to the era of Buster Crabbe’s Flash and Jean Rogers’ Dale Arden.

Lucas, his scrolling preamble aside, found clever narrative ways to explain the who, what and where of what was going on in his film in a way that Lynch never manages. This film is heavy with explication, with a voiceover narrator (some of it added for the TV version, admittedly), internal monologue from characters and a tendency for every new interaction between people to begin with an explicatory preamble contextualising what the characters are about to discuss.

Villeneuve’s film has broken Frank Herbert’s original novel into two halves, and watching Lynch trying to get all of its plot onto the screen in 1984 you can’t help feeling he (or the De Laurentiises, who produced) would have done better to do the same. This Dune is drowning in guff.

Blame Herbert’s book, if you like. Personally, reading it was the moment when I broke with sci-fi, which until then I’d associated with pithy, ideas-driven stories from the likes of Asimov, Le Guin, Dick, Heinlein and Bradbury. Dune, by contrast, was a soap opera in space. And long. The original book was 400 and something pages, with more volumes forming a traffic jam behind. Call it an attention span disorder but I gave up around the halfway mark.

This is not a good film, not at any level. Lynch is not an action director, the look of it is shonky, even with the great Freddie Francis as DP, the sets are frequently wobbly, and though vast amounts of money have clearly been spent on the mostly practical effects (there are some crude early CG moments), it’s been wasted. Toto’s soundtrack is senseless – it brings to mind the vamping Lynch would get from a later musical collaborator, Angelo Badalamenti, which is fine for odd open-ended dramas but does not work here, where a bit of ta-daa and boom is needed rather than airy blah.

There are good things to be found. MacLachlan is fantastic as the wide-eyed youth growing into the nobility already possessed by his father (Jürgen Prochnow). Francesca Annis as his mother has that fatalistic Lady Macbeth thing going on. Siân Phillips is a fantastically swivel-eyed priestess. Max Von Sydow in warrior attire is dignity incarnate. Sean Young, underused but welcome in a Princess Leia-ish role as Paul Atreides’ love interest. Jose Ferrer, not in it half enough, makes a great and commanding Emperor, and Kenneth McMillan as Baron Harkonnen, face covered in pustules and with a tendency to float off into the air, seems to be enjoying himself in his pantomime role.

Imagine if Ridley Scott had made this, as was mooted at one point (he made Blade Runner instead). That would have freed David Lynch up to make Return of the Jedi, which he turned down to make this. Right there, two alternate-reality sci-fi scenarios.

Director: David LynchWriter: Frank Herbert, David LynchStars: Kyle MacLachlan, Virginia Madsen, Francesca AnnisSummary: In the distant year of 10191, all the planets of the known Universe are under the control of Padishah Emperor Shaddam IV and the most important commodity in the Universe is a substance called the spice "MELANGE" which is said to have the power of extending life, expanding the consciousness and even to "fold space" ; being able to travel to any distance without physically moving. This spice "MELANGE" is said to only be produced in the desert planet of Arrakis, where the FREMEN people have the prophecy of a man who will lead them to true freedom. This "desert planet"of Arrakis is also known as DUNE. A secret report of the space "GUILD" talks about some circumstances and plans that could jeopardize the production of "SPICE" with four planets involved: ARRAKIS, CALADAN, GIEDI PRIME and KAITAIN, a world at least visually very alike to Earth and house of the Emperor of the known Universe. The "GUILD" sends a third stage navigator to KAITAIN to ask details from the Emperor and to demand him the killing of young Paul Atreides, son of the Duke Leto Atreides of CALADAN. —David del Real ---@DavidRealActor----