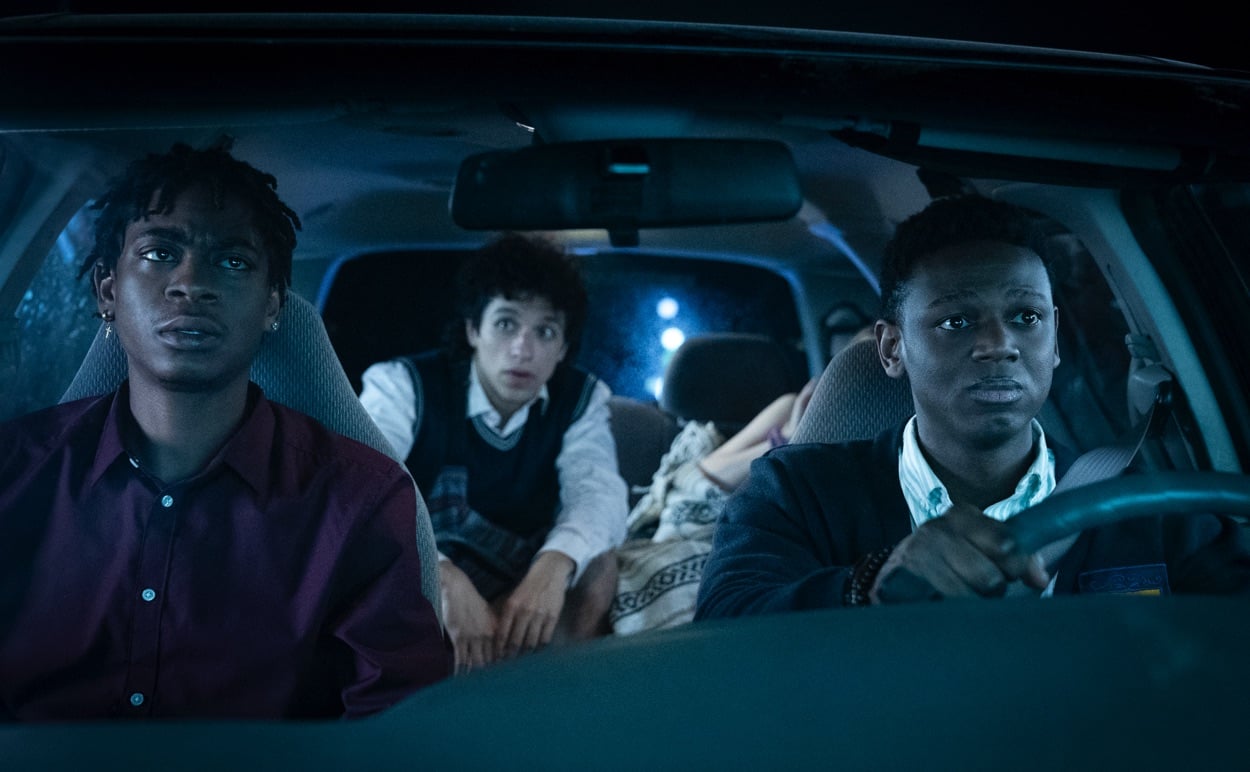 Emergency is a funny name for a comedy but then it’s a funny sort of film, one that combines warm performances, likeable characters and high anxiety in a way that threatens at every turn to neutralise itself but never quite does. High wire stuff.

It’s the “big night out goes wrong” sort of comedy that Harold and Kumar or the two young women from Booksmart once took for a drive around the block but this time out it’s RJ Cyler and Donald Elise Watkins as two familiar black stereotypes. Cyler plays Sean, the streetwise slacker student convinced that “black” and “ghetto” are more or less synonyms. Smart, possibly smarter than his unlikely friend, Kunle (Watkins), the studious offspring of Nigerian doctors who’s going to go far in the world, wears preppy clothes, plays the game.

The action takes place on the big party night of the year, which Sean and Kunle are going to hit hard, becoming, they hope, the first black dudes to complete the “Legendary Tour”, a circuit of all seven parties held at the big frat houses. As Black Firsts go, it’s aiming pretty low but even so Sean has planned the evening with military precision; Kunle is coming along just as soon as he has finished working on his bacterial cultures project.

But first a “triggering” scene very early on to tee us up that something else is in play here, as both Sean and Kunle attend a lecture on taboos in which a white professor discusses the “N” word, to the obvious discomfort of both Sean and Kunle, the only black people in the room.

It seems almost unnecessary as a scene until a white girl turns up on the floor in the house Sean and Kunle share with their geeky Mexican friend Carlos, poleaxed drunk and vomiting. Calling 911 is the obvious thing to do. But a paranoid Sean is convinced that two black guys, an unconscious white girl and the smell of weed all over the place won’t be a good look when the police turn up.

With race now explicitly in play, Kunle, Sean and Carlos decide to drive the unwell inebriate to a hospital, or possibly back to the party where she came from, where her friends can deal with her.

The rest of the film is the three guys, plus the dangerously drunk Emma, driving around town, one thing going wrong after another and a fairly innocent case of trying to help someone beginning to look, more and more, like a case of abduction, kidnap, rape, who knows what, especially once Emma’s antsy sister Maddy gets involved, giving chase to “rescue” her sister.

Maybe in real life Emma’s condition would either worsen or improve to the point where a decision would be forced on the guys, but Kristen Dávila’s screenplay slightly leaves reality on pause while a story about the double consciousness of young black men in a white-dominated society plays out.

This dive off the comedy springboard into more turbulent waters wouldn’t work at all without a good cast, and they are a talented bunch, Cyler and Watkins most obviously, but there’s quality all the way through, for instance in the self-sacrificing performance by Sabrina Carpenter as the bitch-sister exemplar of a white privilege that’s never checked.

Carlos seems like a bit of a fifth wheel, a Mexican included possibly to highlight Dávila’s own experience of race as a Mexican American, but Sebastian Chacon works hard to make us like Carlos. Likeability is the film’s strong suit, in fact, helping smooth over the didactic moments when things veer off piste into the territory of sexism (why “pussy” and “bitch” are such popular insults, for example) when there’s plenty enough to be dealing with already.


Emergency – Watch it/buy it at Amazon