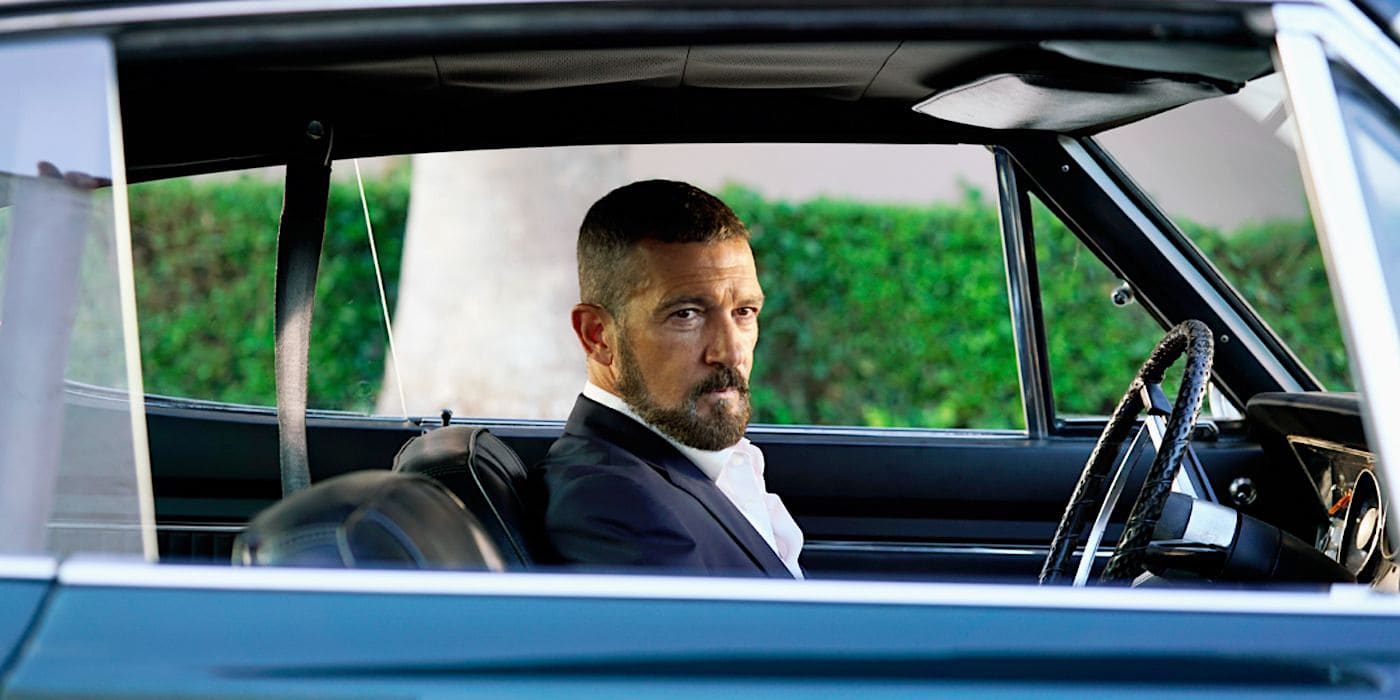 The Enforcer. Not Clint Eastwood, or Jet Li or even Humphrey Bogart (who starred in a mostly forgotten film of the same name in 1951). Instead it’s Antonio Banderas’s name over the title of this very familiar sounding movie, which has ambitions that go not much further than getting itself onto a screen near you.

The “bad guy gets a conscience” plot falls into two halves. First we get to see what sort of a bad guy we’re dealing with – the strong arm of a Miami crime boss with a wretched personal life (wife hates him, daughter wishes he’d drop dead). Then the epiphany, as Cuda (short for Barracuda) gets involved with street criminal Billie (Zolee Griggs) and goes to her aid when she gets into trouble.

There’s a hint of Liam Neeson-style tasty-older-guy stuff going on here, and Banderas makes a cool and efficient thug with a heart beating away somewhere beneath the growl. Debut feature director Richard Hughes and DP Callan Hughes back him up with a complementary look – dark, neo-noir shadows in the night-time cityscapes of Miami.

The screenplay is by W Peter Iliff, who wrote Point Break all those years ago, and hasn’t exactly set the world alight since. It’s a strange beast – efficient in its setup and payoff (at the beginning and end, in other words) but howlingly bad at almost every other point. This is a film full of implausible relationships. Like the absolutely central one between Cuda and Billie – an older man takes a 15-year-old under his wing and never once, not even with a raised eyebrow, does she wonder where all this is going. Because, presumably, Billie intuits that she, in her own way, reminds Cuda somehow of his own estranged 15-year-old daughter? Coughs, looks around room for confirmation that he’s not the only person to find this wildly unlikely.

More generally, Iliff’s screenplay is better at introducing characters than at making them part of the landscape. There’s not enough connective tissue in it and a real tendency towards really flat dialogue. Not stylistcally, minimalistically flat, but “where’s a script doctor when you need one?” flat.

Good actors though. Mojean Aria, taking his shirt off when at all possible to demonstrate time spent in the gym, as Cuda’s wingman (and obvious eventual replacement), Stray. Alexis Ren as the goodtime girl Stray meets in a bar. Zolee Griggs as Billie, nicely naive. Coming out of it best, all things considered, is Kate Bosworth, in a severe businesslike black bob, as crime boss Estelle, a woman with no soul and a rapaciously omnivorous sexuality. The oddly migratory talent of Bosworth might have found a new niche.

The violence is good also, if you like violence. It’s short, sharp and horrible, as it should be. Aria gets the bulk of it, and since he’s introduced as a bare-knuckle fighter recruited by Estelle specifically on account of his skills, it makes sense. But Banderas, too, gets some good fight moments, at one point memorably going at some hapless henchperson with a golf iron.

The Enforcer is part of movie-star Banderas’s canny portfolio career, this action/badass gig with his name in pole position sitting alongside the more rarefied Euro-arthouse fare for the likes of Almodóvar and all those extended cameos playing Bond villain wannabes. It didn’t cost a fortune to make – much of it was shot in Greece, with a few Miami exteriors helping to complete the illusion – and it sits most comfortably alongside all those Steven Seagal movies you used to find by checkouts, shot in Bulgaria or Romania and with a Gun, Shot, Bullet, Weapon, Impact, Kill or Force somewhere in the title. Best enjoyed on a duvet day.

The Enforcer – Watch it/buy it at Amazon