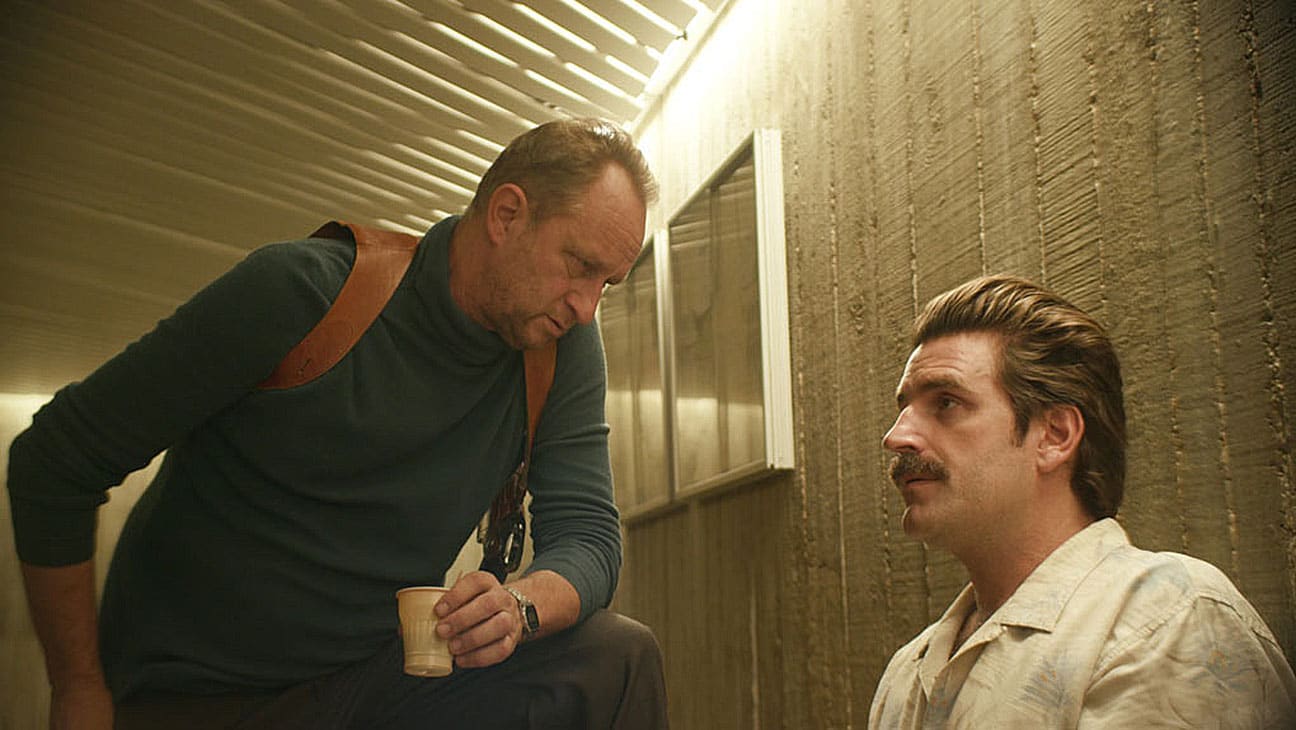 Keep an Eye Out

Keep an Eye Out (Au Poste! in the original French), from Quentin Dupieux – who gave us the film Rubber, about a sentient car tyre, and Deerskin, about a man who becomes possessed by a suede jacket – looks at first like one of the writer/director’s less weird films, as long as you ignore the guy out in a field in red Speedos conducting a full orchestra as the opening credits roll.

From there, at least for a while, it presents itself as a fairly standard policier. A man has been brought in for questioning by the police over the discovery of a dead body outside an apartment block. While he sits in an office, one cop is making a casual phone call trying to nail down something in his social calendar. The other is writing something on the far side of the room.

Tell us what happened, Inspector Buron (Benoît Poelvoorde) eventually asks the chief suspect Louis (Grégoire Ludig), an innocent bystander, so Louis claims. And around this point the other cop stands up, turns around and reveals he only has one eye. The “missing” one has been blurred out in post-production work that’s not particularly convincing.

The inspector lights a cigarette and some of the smoke starts to appear from his chest area. I have a hole there, he tells Louis, in matter-of-fact fashion. Oooh-kaaay.

A surreal detail in a film that had all the makings of being a bumbling-cop comedy, like Memories of Murder, or one of the several Guys films (The Wrong Guys, The Other Guys, The Nice Guys). And then Dupieux ups the ante again with two strange developments, one of which is spoilerish and moves the film more firmly into farce, and the other concerns the regular flashbacks in the film to Louis’s alibi.

As Louis runs through his various sorties from his apartment to the outside world on the night in question – there were seven, a nosy neighbour has told the cops – his recollections start to become coloured by interventions from the interrogation. What time was it, the cop asks. And as Louis wonders whether it was 2am, 3am or maybe 4am, in his flashback-alibi the clock on his kitchen wall buzzes back and forward dementedly, between 2, 3 and 4. Later, characters Louis didn’t know on the night in question – people he’s only just met at the police station – start to invade his recollections. His “flashback” starts to take on a life of its own.

Call it a nod to the deconstructionism of the philospher Jacques Derrida if you like, or maybe provocateur Dupieux is just dicking about, but it’s this messing with the narrative, and with the sanctity of the flashback (though Hitchcock was at it as long ago as 1950 in Stage Fright) that this film is all about. It’s not interested in the murder or the dead man, or the guy with one eye, or even the cop doing the interrogating, though Poelvoorde does have one of those fantastically mobile faces that suit deadpan comedy down to the ground, and Grégoire Ludig wisely doesn’t try to top him as the increasingly confused suspect.

Dupieux has one further reveal up his sleeve, another postmodern one – everything’s a narrative, right? – but at two points on the journey there he also messes about with the chronology of audience participation (in short: we watch, then discuss) by offering on-the-spot critiques of the film so far. “This is so pedestrian,” Buron complains at one point as Louis gives his testimony. “It’s just a totally boring chain of events.” Towards the end a smartphone message pipes up with what might be a critic’s verdict on what we’ve just seen – “Part brilliant, part laboured.”

That is about right. Shot at pace under the acid yellows of a copshop’s fluorescents, or unforgivingly harsh street lighting, or in Louis’s cosy apartment, where his wife remains oblivious the entire time to what’s going on, Keep an Eye Out is an update on Kafka’s tales about men who aren’t sure what they know or what they did and authority figures who are ever present, almost benevolent, semi-malign.

If you like the writer/director, this will slot right into the Dupieux-shaped hole in your life. If you don’t, it’ll probably make you spit.

Keep an Eye Out – Watch it/buy it at Amazon

Director: Quentin DupieuxWriter: Quentin DupieuxStars: BenoÃ®t Poelvoorde, GrÃ©goire Ludig, Marc FraizeSummary: Louis just found the corpse of a man in front of his apartment building. Taken in for custody by Captain Buron, he finds himself on the wrong end of a surreal interrogation. But how can you prove you are innocent when the cops are crazy?