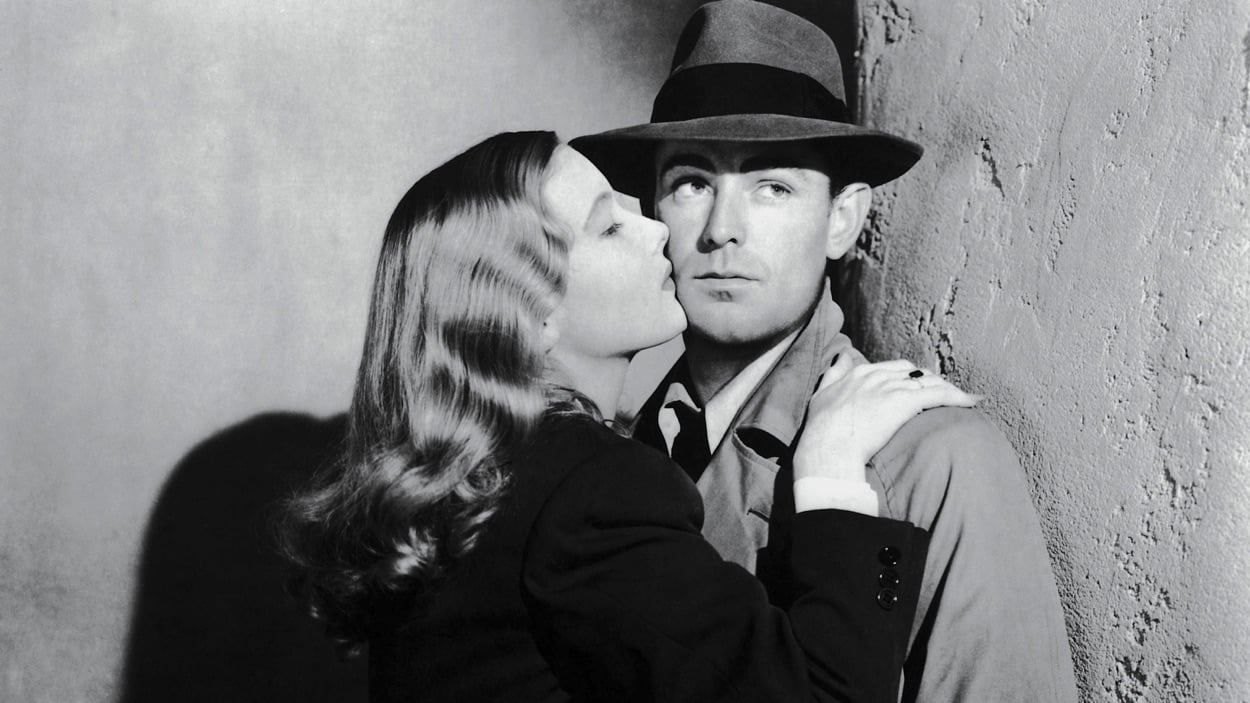 This Gun for Hire

The gun for hire in This Gun for Hire is Alan Ladd’s, here in the role that made him a star, his blond hair dyed black the better to play a character called Philip Raven, a hitman who’ll do in anyone anytime as long as the money is right.

It’s also the film that first teamed up Ladd with Veronica Lake – three more features and a number of appearances in morale-boosting wartime musical revues were to follow – one of the great pairings of the film noir era.

It’s an adaptation of Graham Greene’s redemptive novel A Gun for Sale, and tells the story about a hitman (Ladd) who kills a man for his secret formula and is then double-crossed by a shadowy character acting for Nitro Chemicals, the company after that formula. Realising that he’s been paid off with marked notes and that the cops are after him, Raven is out for revenge.

Two bits of “oh, come on” plotting. Lt Michael Crane (Robert Preston), the cop on Raven’s tail, is only on the case because he happened to be in Los Angeles (with a hard G) visiting his girlfriend. A cop on holiday gets the case – in what world does this happen? And the shadowy pharma henchman (Laird Cregar), an effete man with a penchant for peppermint creams, also has a sideline, running a nightclub, where Crane’s girlfriend Ellen (Lake) does a nightly singing magician act dressed in a tinfoil dress designed by Edith Head to stop traffic, if not hearts.

Everyone tied in to everyone else’s business just a bit too neatly, maybe. But there is an awful lot to like in this film, beyond the va-va-voom of Lake’s sultry appearance. Ladd is also sensationally good, redefining screen villainy in the sort of role Casey Affleck would now have a lock on, as the killer with a baby face. Wheelchair-using sourpuss pharma boss Alvin Brewster (Tully Marshall) bristles with malevolence (and is clearly a model for Mr Burns in The Simpsons). Preston is slightly more problematical, since he’s the hero, romantic lead and actual star of the film, but is bounced out of the spotlight by Ladd, fourth on the bill, especially once Raven and Ellen are thrown together as a pair of fugitives. Suddenly, as Ladd and Lake transmogrify into something like a romantic pairing, Raven’s bad-guy status also starts being re-calibrated. Raven might be a killer, but it turns out he’s he’s also a patriot. And once he learns that the stolen chemical formula is heading in the direction of Japan, he is spurred into doing the right thing. It’s 1942 and there is, after all, a war on.

The DP on this film is the great John Seitz, of Double Indemnity and Sunset Boulevard, and his cinematography leaps off the screen from the very first shot in Raven’s dingey apartment right to the showdown finale when Raven metes out justice as judge, jury and executioner.

In its brief 81 minutes, Frank Tuttle demonstrates how to get a quart into a pint pot with direction that’s lean and forward moving, Cregar and Marshall demonstrate the importance of superb character actors, especially when time is tight, and Lake gets most of the way towards being a femme fatale (she’s smart and sexy but NOT trouble, even in that dress).

Maybe it isn’t an all-time classic – Albert Maltz, who helped adapt Greene’s book, called it “pretty second rate” – but it is an example of how good machine-made Hollywood films could be when everything does what it’s meant to do. Audiences loved it, though, and so did critics. And the studio knew that in Ladd and Lake they had something special on their hands. Even before This Gun for Hire opened, the duo were at work on another movie, The Glass Key.

This Gun for Hire – Watch it/buy it at Amazon