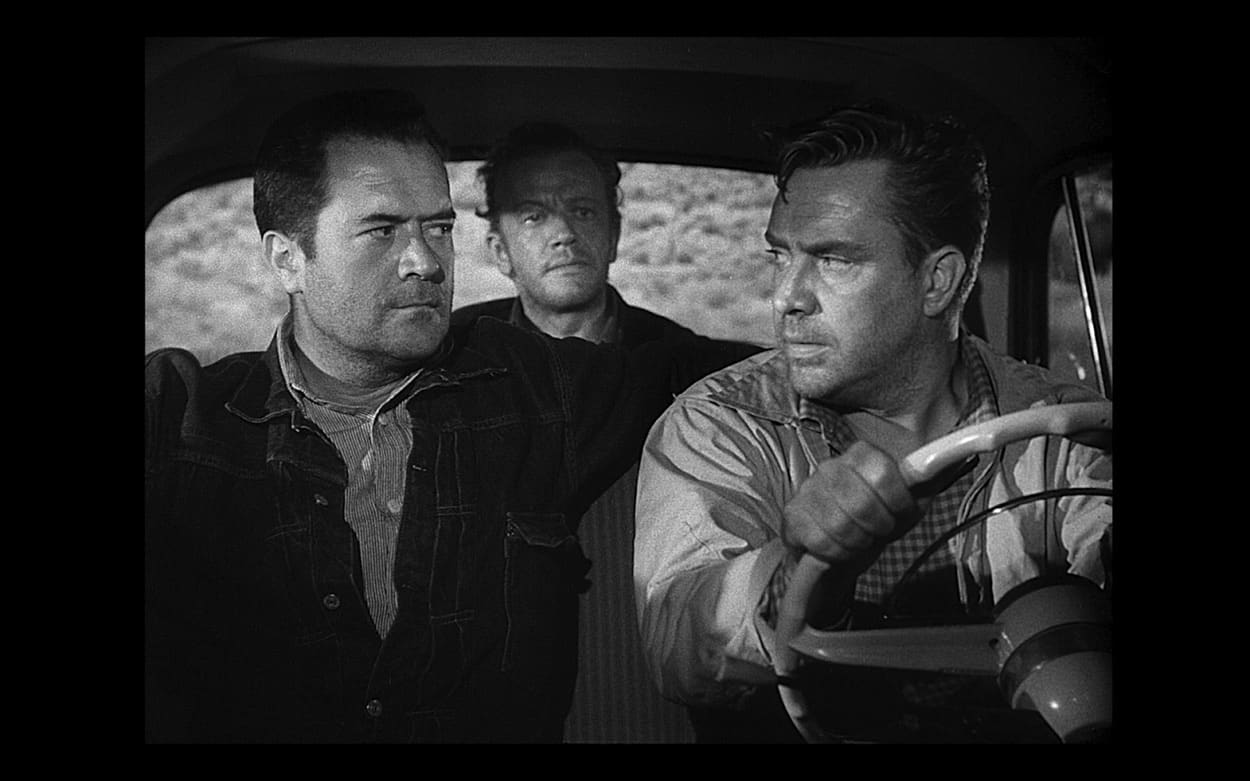 1953’s The Hitch-Hiker opens with an on-screen declaration: “This is the true story of a man and a gun and a car. The gun belonged to the man. The car might have been yours – or that couple across the aisle. What you will see in the next seventy minutes could have happened to you. For the facts are actual.”

A gun, a man, a car, those staccato sentences, the threat of death – it’s film noir, and an unusual one not because of its length (a lot of noirs were short B movies), but because it was directed by Ida Lupino, a rare female voice in among the big swinging dicks of the noir genre.

Lupino, born in the UK to a family that could trace its showbiz roots back at least as far as renaissance Italy, had started out as an actress in British films, and eventually arrived in Hollywood in 1933. She didn’t like acting much so used her downtime on set to learn the nuts and bolts of picture-making. Realising there was a niche for production companies that could bring in decent B movies on budget, she set up The Filmakers Inc with her husband and co-wrote and directed a string of films with a “social” theme – men behaving badly towards women that usually meant – such as 1949’s Not Wanted (unwanted pregnancy) and 1950’s Outrage (rape).

She co-writes and directs again in The Hitch-Hiker, which has far less “social” content than any of her films to date. It’s more straightforwardly an entertainment, and one that gets off to a brisk start with a hitch-hiker – only legs and feet in shot – jumping into a car at the roadside, shortly afterwards killing the driver, then moving on to the next victim in another car.

Bad guy established, we meet the good guys – Edmond O’Brien and Frank Lovejoy as a pair of old buddies who have told their wives they’re off for a bit of shooting in the mountains. In fact they’re heading down Mexico way for fun, girls, the full packet, or at least that’s what mechanic Roy (O’Brien) wants. The staider, more professional Gilbert (Lovejoy) isn’t so sure. In fact neither man gets what he wants, because both find themselves at the wrong end of the hitch-hiker’s gun after being the latest saps to give him a ride.

Lupino gives us a faceful of the bad guy all in one go, gimpy eye and all, by having William Talman, as gun-toting desperado Emmett Myers, leer forward into a dramatically positioned pool of light. It’s a neat shock reveal, and that half-closed/half-opened right eye is going to become crucial as the plot progresses – Roy and Gil cannot ever be sure if Emmett’s asleep and so jumping him becomes problematical.

The plan is straightforward – Emmett wants the guys to drive him through Mexico to the port of Santa Rosalia, where he’ll first kill Roy and Gil and then jump on a ferry to freedom. On their tail are the cops, threatening to close the gap every time their quarry hits an obstacle – a flat tyre, mechanical malfunction, the need to buy groceries without alerting the shopkeeper as to who they are.

Lupino works the variations while Lovejoy and O’Brien pull variations on looking scared and feeling emboldened enough to try something. Talman, as what is in effect a serial killer, plays an angry man rather than a mad one, who kills out of necessity rather than blood-lust. In fact, as this short film wanders through its 70 minutes, the suspicion starts to grow that Emmett Myers might even be warming to Gil and Roy, who are guys’ guys like himself when all is said and done.

The action cuts a couple of times back to the copshop where a Mexican police captain and a slick US “Government Agent” indulge in chit-chat about the progress of the trio and the cops’ pursuit. It looks at first like a time-killing reiteration of events we’ve just seen on screen but it also draws a subtle parallel between the car, where there’s a guy in the back with a gun on the driver, and this office, where the guy who’s ostensibly in charge (the Mexican) might not be.

Nicholas Musuraca, one of the great underhymned cinematographers of old Hollywood, shoots it all gorgeously – that black car barrelling through the bright desert landscapes, those inky nights when Roy and Gil fancy their chances – and Lupino directs with concision. This film keeps moving.

It’s not only a good film but an unusual one – female director, set in Mexico (though shot in California), with much use of the Spanish language, to the point where Emmett’s lack of ability to speak the lingo becomes a crucial plot element. Having learned a thing or two from her “social” films, Lupino makes an effort to keep things real and it really pays off.

PS: If you want a shiny disc of this movie, to have and to hold from this day forward, I recommend the Kino Lorber remaster (it’s the one linked to below).

The Hitch-Hiker – Watch it/buy it at Amazon

Director: Ida LupinoWriter: Collier Young, Ida Lupino, Robert L. JosephStars: Edmond O'Brien, Frank Lovejoy, William TalmanSummary: Two friends on a fishing trip pick up a stranded motorist who turns out to be a psychopathic escaped convict. This sociopath has already murdered other good Samaritans in his efforts to evade authorities. He sadistically taunts and threatens the two men and perversely delights in telling them that he has them both marked for death sometime before the end of the trip. His destination is a ferryboat in Baja, California, which he hopes will help him get to the mainland. The hostages hope to stay alive long enough to escape or be rescued by Mexican authorities. —duke1029