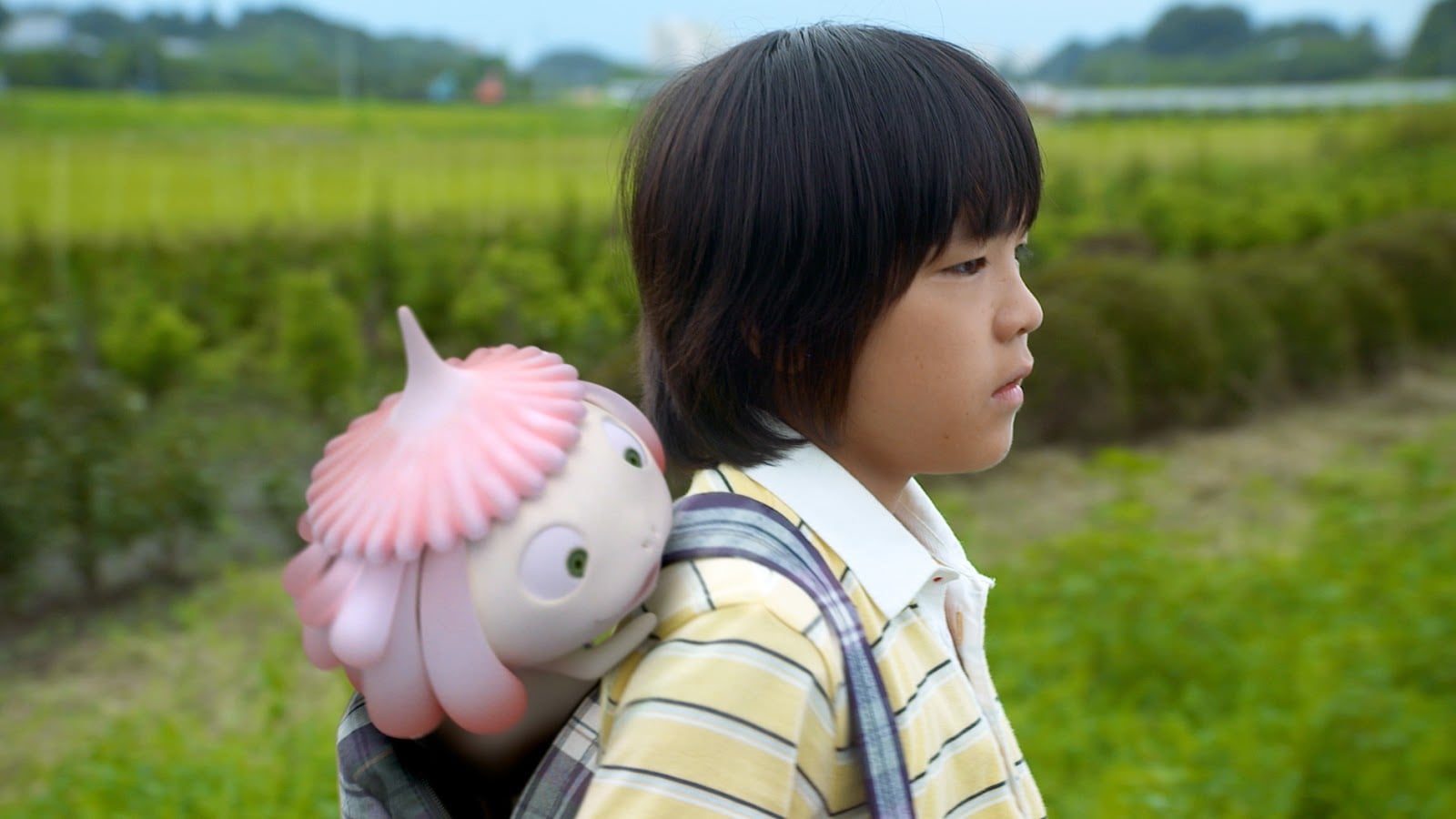 Jellyfish Eyes starts out looking like a cute ET story and winds up being more a rampage-and-destrcution, Godzilla kind of thing. In between it gets most of the big things right.

It’s Japanese, from 2013, and is the only feature film so far directed by Takashi Murakami, who is more a TV producer, though he has directed a number of shorts, among them promos for Billy Eilish and Kanye West, both obviously fans of Murakami’s style of animation.

Jellyfish Eyes is not an animation. Not entirely, anyway. It’s a live-action story of a kid with no daddy (how often do kids stories feature absent dads?) who moves to a new school/town/life with his grieving mother and is befriended by a F.R.I.E.N.D – the acronym stands for something contrived – an adorable flying (animated) creature with special powers.

At school Masashi discovers all his new classmates secretly also have F.R.I.E.N.Ds, which they control with a small device and keep hidden from the adults. Masashi’s doesn’t come with a device, which makes his more special. Meanwhile, behind this outbreak of cuteness lurks a black-cloaked cabal of techy overlords – they have great skin and artfully cut hair and look like a boyband – who might be responsible for this glut of strange and largely sweet-natured creatures. Masashi’s uncle – who looks like he might have once been in a boyband himself – has some not entirely specified connection to this mysterious and possibly not benign quartet.

The elements of the children’s adventure are in place. The kid on his own, the us against them of children and adults, with children clearly having the upper hand. Some secret knowledge or power. The treacherous uncle. Out in the world away from the F.R.I.E.N.Ds and their keepers, Murakami’s portrait this adult world is of a place that’s full of unreliable operators. His focus returns repeatedly to a small group of religious/nationalist zealots trying to recruit new members on the streets. Adults are clearly nuts. Children are immune, because they are pure of heart.

At some level this is a love story between a boy and his F.R.I.E.N.D, at another a coming of ager about a boy learning to grieve for his dead father, at another a love story between the kid and a girl in his class, the unattainable Saki. At yet another a heroic action adventure that builds from skirmishes between F.R.I.E.N.Ds into an all-out onslaught when a very large and aggressive F.R.I.E.N.D turns up, at the behest of the cloaked Illuminati-like boyband overlords, who have decided things are not moving at anywhere near a fast enough pace for their liking.

Takuto Sueoka is appealing as the increasingly resourceful bright spark Masashi, and so is Himeka Asami as the initially aloof Saki. Takumi Saitoh plays it Disney-style as the uncle, trying not to reveal too much and suggesting that Naoto might be a good guy underneath it all, though he’s obviously horribly compromised by the mere fact of being an adult.

The colours fizz and pop with an aspartame tang, and things lurch here and there into territory that seems odd in a kids film. The upskirty shots Murakami treats us to, the fact that one of the F.R.I.E.N.Ds appears to have the most spectacular rack under her tight top. Another bit of grit in an otherwise smoothly flowing story is the way the plot occaionsally shreds plausibility in an an attempt to move quickly along to Murakami’s next waystation.

The special effects are fairly terrible, stopmotion-y stuff, charmingly amateur if you’re being generous, or a dry run for something more impressive, maybe.

There was meant to be a follow-up movie, but it didn’t materialise. As I write this (August 2022), Murakami has announced that it’s now on the cards again.

That’s a good thing. The grand gestures, the bold strokes of this movie are all the right ones. A bigger budget would iron out some of the wobbles, a script overlord might address some of the plot weaknesses. Bring on Jellyfish Eyes II, or whatever Murakami calls it.