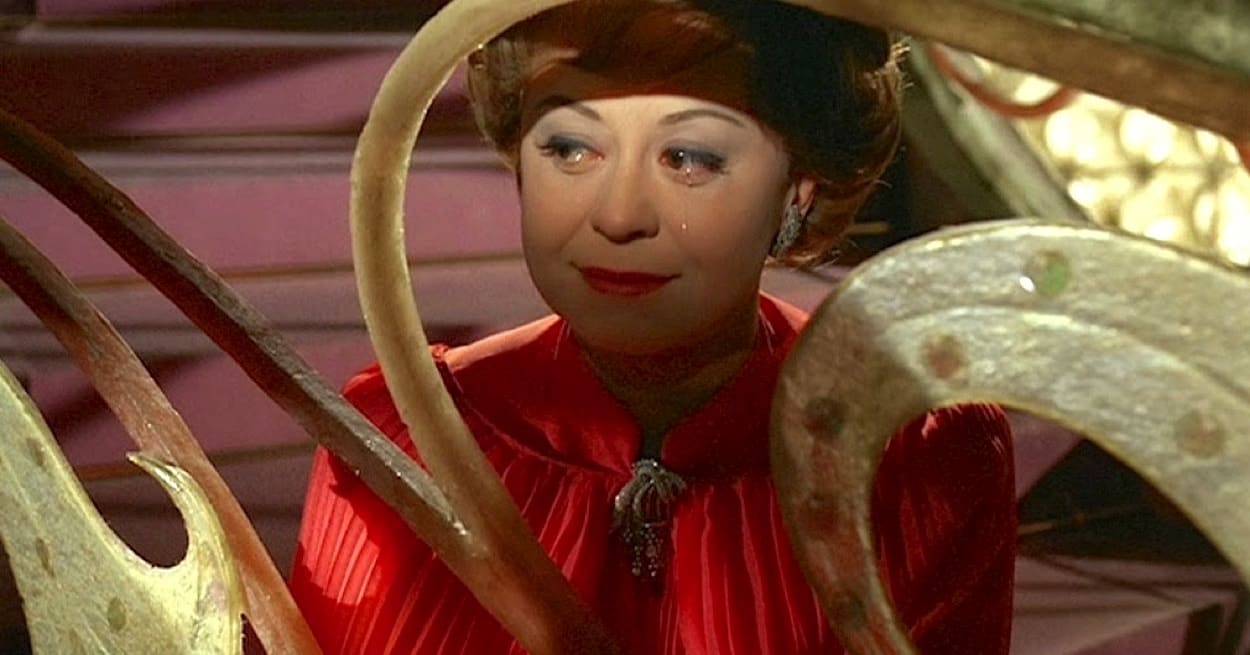 Juliet of the Spirits

1965’s Juliet of the Spirits (Giulietta degli spiriti) was Federico Fellini’s first film in colour and he goes at it like a child whose Christmases have all come at once.

Up comes a screen of opening credits so vividly blue that it’s shocking, followed by an opening scene where the quiet and mousey Juliet (played by Fellini’s own wife Giulietta Masina) is assailed on all sides by people, chatter, action. The quiet romantic evening she’d had planned with her husband Giorgio (Mario Pisu) has been upended. He’s brought home a gaggle of people, party animals who want to have fun.

Fellini wants to have fun too, and he wants to fill the screen with his other discoveries. Carl Gustav Jung and Lysergic Acid. Fellini mixes the archetypes of Jung’s theories about the unconscious mind with the revelations of the psychedelic revolution then underway (he’d taken acid himself shortly before making the film), stopping off by way of My Fair Lady (which had been released the previous year) for some typical 1960s nostalgia for the Edwardian era and to take inspiration from the big costumes and insane hats designed for that film by Cecil Beaton – this is a also great film for hats.

Mix colour, Jung, acid and headgear together and the result is this very 1960s magical mystery tour, one following Juliet as she journeys towards self-enlightment and attempts to acknowledge the fact that her husband – a man who sleeps in an eyeshade and wearing earplugs – is having an affair with another woman, or maybe multiple other women. The fact that most of Fellini’s films have an autobiographical element and that one of the women in this film, Sandra Milo, was Fellini’s mistress won’t have been lost on Masina.

Milo plays Iris, an offscreen spirit guide whom Juliet encounters in the film’s opening scene and who pops up here and there to offer guidance and “go girl” encouragement in voiceover, while also appearing on screen as Susy, a love goddess à la Anita Ekberg who talks about nothing but sex and men and whose breasts threaten at every moment to take over the film entirely.

More an eat as much buffet of good things than a carefully planned meal, Juliet of the Spirits is a Technicolor Odyssey with Juliet as its great travelling adventurer. It’s a strange performance – the mouse who roared… eventually – one of almost supernatural stillness, but it’s quite right for a film like this, where circus strongmen shoulder nuns out of the way, a Venus in a shell over there is trumped by a stylite saint glimpsed atop a pole, before a biplane swoops in to deliver Juliet’s fantasy grandfather.

Fellini would eventually overdo this sort of circus approach to film-making, where flashbacks and fantasies, hallucinations, apparitions and psychic projections all fight each other for screen space, but he gets it just right here, even though from this distance it does all look a bit much, and the lack of a real plot means if you’re not feeling the groovy visuals, there’s not really anywhere else to go.

The score is by Nino Rota and it is loud in the mix on the Criterion restoration I watched (it’s the one to go for, if the guys at Blu-Ray.com are to be believed, and they usually are), a whimsical carnivalesque parade of inconsequentiality which, if you’re being unkind, sums up the whole film.

Juliet of the Spirits marks yet another metamorphosis for the remarkable Fellini, who’d started out writing scripts before becoming a neo-realist, before going on to make his best films in the late 1950s and early 1960s. For all its giddy gaudiness, this cannot match Fellini’s previous film, 1963’s 81/2, for conceptual bravado or psychological insight. But for sheer visual impact, it’s almost impossible to beat.


Juliet of the Spirits – Watch it/buy it at Amazon