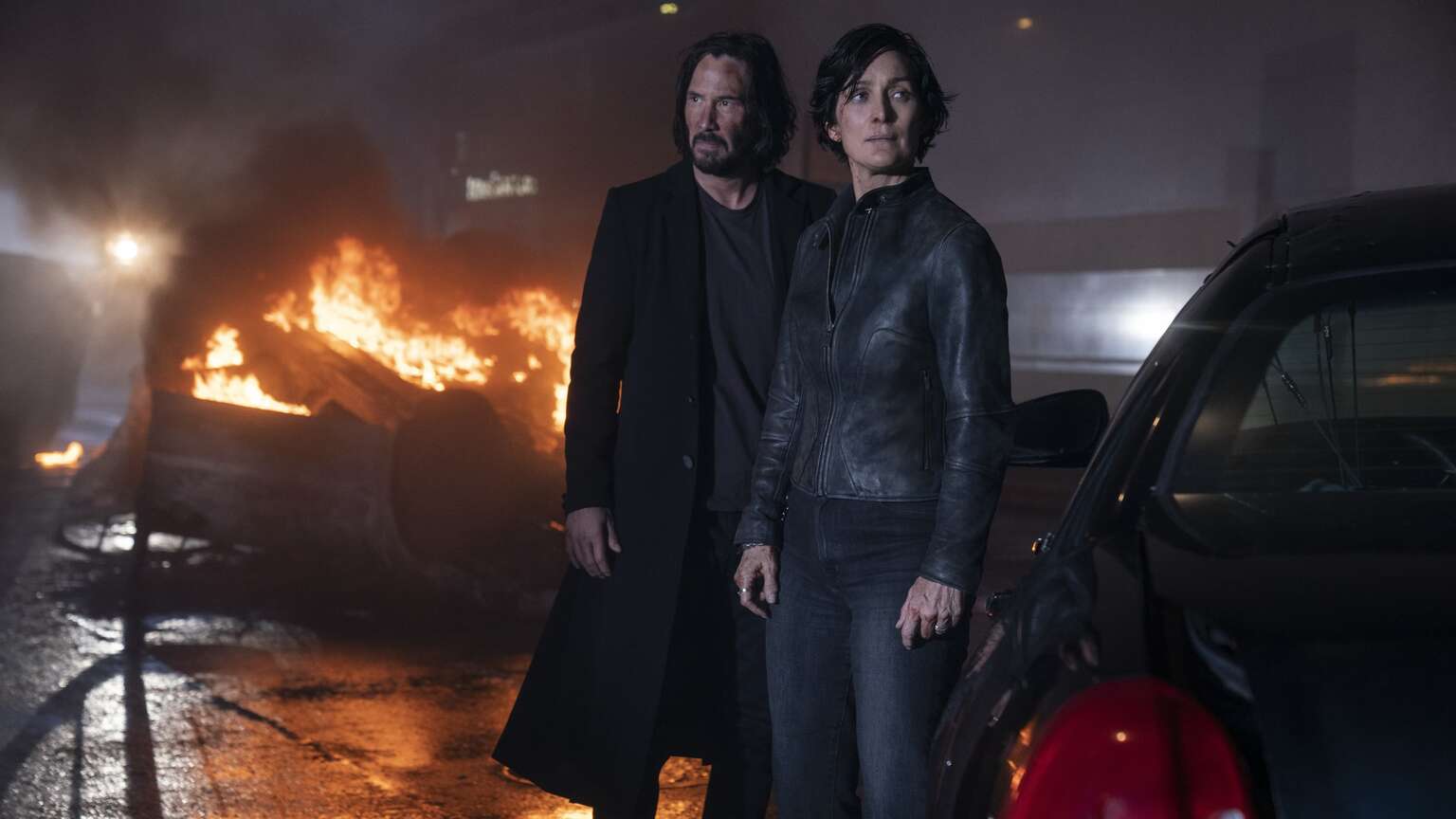 Dull rather than dim,The Matrix Resurrections reanimates the corpse of the original and best of the previous three Matrix movies and sets off in the right direction before bogging down in the sort of world-building, lore-laden plotting that hobbled numbers two and three.

Some years have passed and Thomas Anderson (aka Neo aka The One but really Keanu Reeves) is now the world-famous designer of The Matrix, a trio of games that once took the world by storm. The games are still out there, though these days more in a legacy rock band kind of way. Resting on his laurels, Mr Anderson lives the gilded life of the successful and feted game designer. But he is troubled by hallucinations so vivid they seem to be flashbacks to a life he once lived, one involving slo-mo fights and long black coats. In fact these are, his analyst tells him, the disturbed fabrications of an unsound mind. We know otherwise. Especially as, in proper Matrix style, the analyst goes by the name of The Analyst (and is played with slick Bond villain unctuousness by Neil Patrick Harris).

Things kick up yet another level of meta-referencing when the company Anderson works for is commissioned by its parent company, Warner Bros, to produce a fourth Matrix game. Cue bright young gamers brainstorming their way into the world of The Matrix – handy bit of explication for those late to the party – and wondering if they’ll ever come up with anything to top “bullet time… we need a new bullet time”. Inert genius Anderson, meanwhile, looks on glumly.

The Matrix Resurrections teases. The tension is of the “when is Clint going to strap the guns back on” sort. And eventually, Neo/Anderson/Keanu does re-enter the “real world”, and for the noblest of reasons. He’s on a mission to save Trinity (Carrie-Anne Moss), now bumped up to full-bore love interest of a tortured sort. Why is Trinity going by the name of Tiffany? Does she know who she is? Is her loving husband (played, in a knowing bit of casting by Chad Stahelski, who was Keanu’s stunt double in the original films) really her husband? In fact is the real world really the real world at all, or in red pill/blue pill conspiracy style is humanity still being farmed in those giant hivelike structures while the rebel army darts about in what looks like a futile war of liberation? We know the answer to all those questions too.

Coat on, fray rejoined, fights incoming, this is a film relying on familiarity for a lot of its appeal. But there are noticeable absences. Laurence Fishburne most obviously, though there are enough callbacks to the first films to remind us how pivotal Fishburne’s Morpheus was in numbers one to three. Yahya Abdul-Mateen II makes a decent replacement as a character who appears to be both Morpheus and Agent Smith but the more he imitates Fishburne, the more Fishburne’s absence is felt.

Carrie-Anne Moss looks lithe, Keanu whisper-growls his way through a screenplay written to suit his almost Shatner-esque style of delivery, and lunges into action in a way that would be remarkable in a world without John Wick. “I still know kung fu,” he muses to himself at one point. And he does.

The first Matrix was a great action movie in a cool wrapper. Bullet time. That slo-mo helicopter crash. “Guns. Lots of guns.” The transcendent ammo-dispensing, concrete-shredding finale and all that. The second and third films had a commercial function – make money – but no artistic one. The story had been told, beginning, middle and end, Neo to the One, and did not need telling again. Or adding to with a smokescreen of pseudo-philosophical musing. Yap, yap, yap. Many extended scenes of excruciating tedium. Many over-enunciating characters with names like The Oracle or The Architect. Enter God, exit credibility.

There’s a bit of that going on here too. At one point The Merovingian (Lambert Wilson) re-appears, for instance, babbles something incoherent and disappears again, his presence little more than chum for the lorehounds. On the upside there are fresh, action-style characters, like Bugs (Jessica Henwick) and Seq (Toby Onwumere) who fill the holes left by Switch (Belinda McClory) and Cypher (Joe Pantoliano) from the first film and who give the film its forward drive and much of its claim to relevance – they do new stuff.

In short, Matrix 4 never does come up with anything to outdo bullet time but it does at least have a go. It’s cool, fun and fascinating, some of the old magic still works and it’s the best Matrix movie since the first one. But then two and three were crap.

The Matrix Resurrections – Watch it/buy it at Amazon

Director: Lana WachowskiWriter: Lana Wachowski, David Mitchell, Aleksandar HemonStars: Keanu Reeves, Carrie-Anne Moss, Yahya Abdul-Mateen IISummary: Return to a world of two realities: one, everyday life; the other, what lies behind it. To find out if his reality is a construct, to truly know himself, Mr. Anderson will have to choose to follow the white rabbit once more.