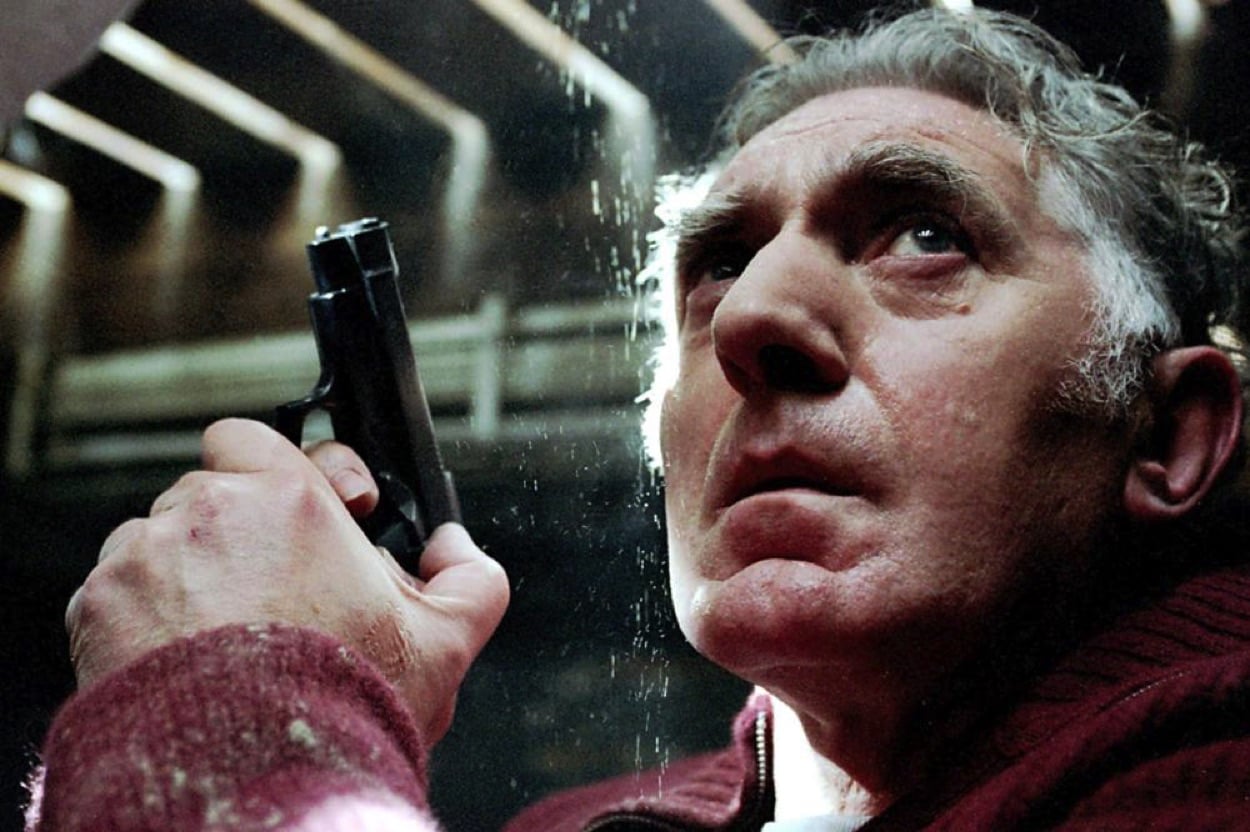 A hitman’s final job. A cop on the case. A paedophile network run by very well connected men. Corruption at the top end of the police. What could easily have been an identikit crime thriller comes out as something a bit more in The Memory of a Killer, thanks to intelligent direction by Erik Van Looy, fine playing, in particular by Jan Decleir as the conflicted gun-for-hire on the home straight, music by Stephen Warbeck that dives into the rhythmic when the going gets tense, and editing that lifts the whole production a notch and helps make it look like it’s got more than a TV budget behind it.

You might know it by its original title, De zaak Alzheimer, which adds a little wrinkle to the basic outline above – this hitman has early onset dementia and it’s beginning to nibble away at him. He also knows what’s coming. His brother also has it and has been reduced to a staring blank in a nursing home. And so Angelo Ledda (Decleir) has started making Memento-style notes on his forearm, to remind him of the specifics of what he’s doing.

The trouble is that what he’s doing is sickening him to his stomach. Killing guilty adults is one thing, but exterminating a 12-year-old girl who, in the tense opening scene, we’ve seen being pimped out by her father, is another thing altogether. And so an unlikely avenging angel is born and sets off on the warpath, driven by memories of his own father and his own unhappy youth long ago.

You might also know the film through the 2022 remake, Memory, starring Liam Neeson. And if you’re very good you might also know that the film was Belgium’s official Oscar submission for the Best Foreign Language award. It got no further than the long list. In the end Alejandro Amenábar’s The Sea Inside won. But for all its merits The Memory of a Killer was also undoubtedly propelled up the rankings thanks to its thematic connections to the Marc Dutroux case, a horrific Belgian paedophile scandal that was rocking the country at the time, and news of which was rippling out across the world.

Another way of putting all this is that the ostensible hero, the cop Eric Vincke (played as dour, stoic and resolute by Koen De Bouw) and his playful, maverick sidekick Freddy Verstuyft (Werner De Smedt) don’t cut through quite as much as you might expect, especially when the charismatic Decleir is on the screen. They’d get two more chances to make their mark, in further adaptations of Jef Geeraerts’s novels, in 2009’s Dossier K. and 2017’s Het Tweede Gelaat (aka Double Face).

Genre elements abound, and you can tick them off. There is, for example, a MILF-y sexpot introduced for little other reason than that’s what films like this specialise in. Freddy takes a peek down her cleavage and so do we. The hitman dresses like a high-class undertaker, in smart black and a crisp white shirt. The colour palette is TV-cop-show blue. And the camera has a tendency to move in the way cameras move in TV cop shows – gliding sideways when static would be better, because gliding is what movie cameras do, right?

As well as 2003 looks, when it was made, and its 1970s approach to female flesh, is its attitude to the only woman on cop Eric Vincke’s squad. Hilde De Baerdemaeker plays Linda, a team member so badly underused that it jars. De Baerdemaeker looks good, on her brief showing, and returned in the following Vincke story, Dossier K. Not having seen it, I can’t relate how much more screen time and lines she got.

It’s a good story well told, up there with the best of the TV cop shows but with a sense of pace and urgency you don’t see every day. Should it have got further along the road towards the Oscars? Against the likes of Zhang Yimou’s House of Flying Daggers, Oliver Hirschbiegel’s Downfall, Nimród Antal’s Control and Hirokazu Koreeda’s Nobody Knows the answer is probably not.

The Memory of a Killer – Watch it/buy it at Amazon

Director: Erik Van LooyWriter: Jef Geeraerts, Carl Joos, Erik Van LooyStars: Koen De Bouw, Werner De Smedt, Jan DecleirSummary: Vincke and Verstuyft are one of the best detective teams of the Antwerp police force. When they are confronted with the disappearance of a top official and the murder of two prostitutes, the trail leads to the almost retired assassin Angelo Ledda. Since Ledda starts showing symptoms of Alzheimer's, it's getting more and more difficult to complete his contracts. When he has to murder a 12-year old call-girl, he refuses and becomes a target himself. While Vincke and Verstuyft are chasing him and counting the corpses, Ledda is taking care of his employers. ?BlackHawk