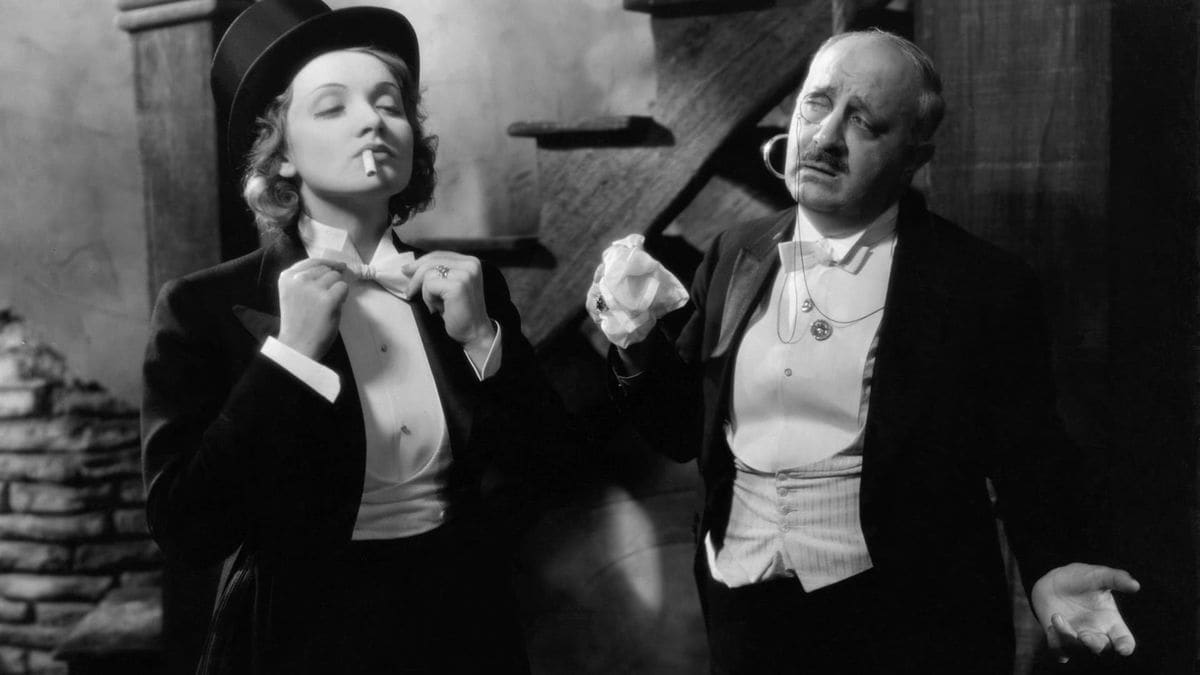 Josef von Sternberg was the sort of man who loved it when a plan came together, and in 1930’s Morocco his master strategy paid off. The plan: having found himself shipped to Berlin by Paramount after a string of Hollywood failures, Von Sternberg decided to find a star there, groom her, and then use her to buy his ticket back to the big time.

The star was Marlene Dietrich and even before The Blue Angel, Von Sternberg and Dietrich’s first film together, had been released in the USA, he was back in America using it to tout for business. Summoned by telegram, Dietrich followed him and by the time she arrived Morocco was already in the planning stage.

In ain’t broke/don’t fix it style, Morocco reworks ideas from The Blue Angel and again casts Dietrich as a cabaret singer with a striking stage presence and a come-hither allure. In The Blue Angel she was a demon of destruction luring a crusty professor onto the rocks of desire – silly man – but here Dietrich’s character finds that she too is locked in love’s grip, after she meets a foreign legionnaire in Morocco. The two fall for each other in “can’t help it” style, and though both are lone wolves who pick up and drop lovers as and when it pleases them, neither can resist love’s tug once they have clapped eyes on each other.

The story, inasmuch as there is one, is of him meeting her, followed by a duelling sort of semi-courtship between two people who, actually, don’t normally do this sort of thing, before Legionnaire Tom Brown (Cooper) is sent off on a suicide mission by a superior officer whose wife he’s also been servicing. The whole thing is further complicated by the presence of Adolphe Menjou as a rich swell who’s also fallen for Amy and would love to take her away from all this.

Von Sternberg works up a great atmosphere, the sort that Casablanca would later borrow – heat, emotion, exotic locals – so much so that the Moroccan government loved the film (even though it doesn’t have much time for actual Moroccans and was all shot in California). Those tourist dollars.

Amazingly, considering we’re only two years into the sound era, Von Sternberg has complete mastery of it, and is confident enough to use silence, and quite a lot of it, as a dramatic device.

He’s also on the top of his game as to the look – this is a gorgeously sumptuous film, beautifully shot, with sets dressed to within an inch of their lives and then lit as if for stills photography (this painstaking approach wasn’t for Cooper, who wouldn’t work for Von Sternberg again). Oscar nominations for direction, set design and cinematography followed (for Dietrich too).

If only there was a decent restoration so we could see it all more clearly. The Criterion one is good, as far as it goes, and it’s certainly watchable and enjoyable, but the tonal values are a bit off, particularly at the top end, and it’s soft, probably because it was shot that way, but the years have also added extra cotton wool. Tinny sound is an added bugbear.

Regardless of the physical state of the film, it all works and the final shot powerfully sums it all up – previously independently minded Amy running after her legionnaire in stilettos through the sand dunes, undone by mad, overwhelming love.