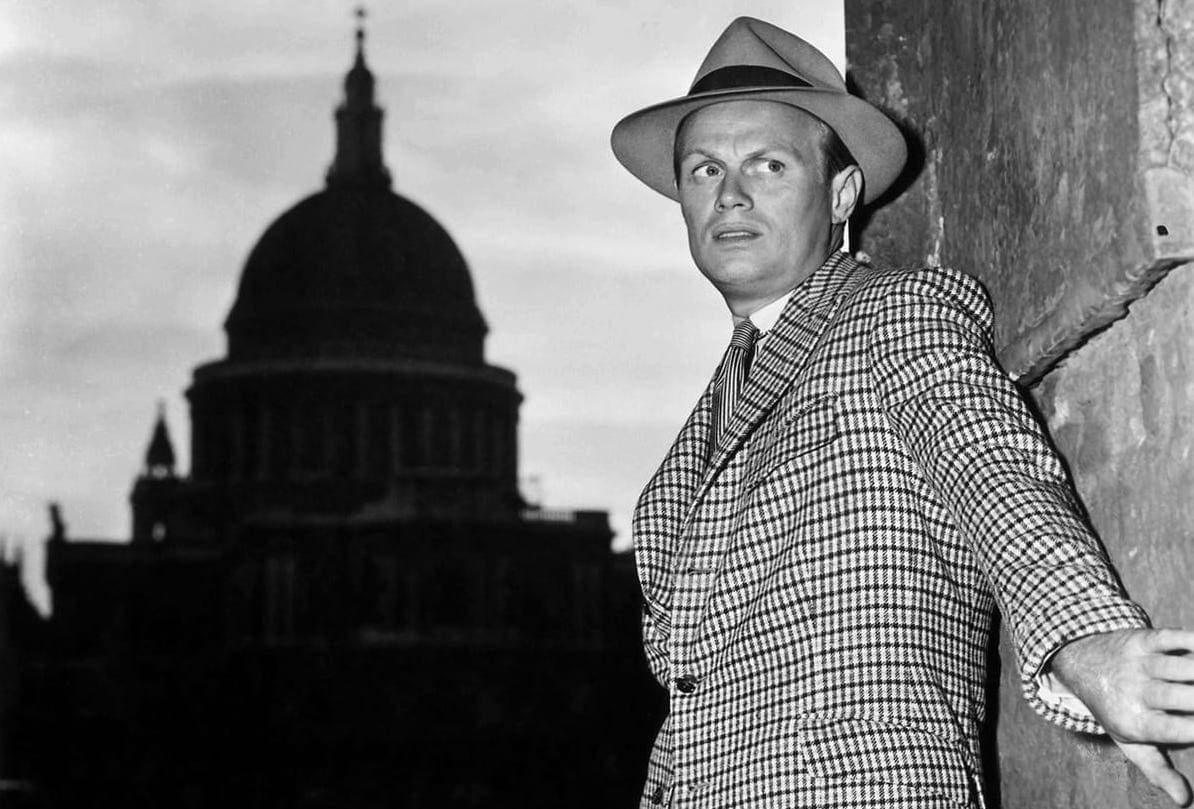 Night and the City

Night and the City is often described as the best film noir out of the UK. It was made by an American director with a French sounding name, Jules Dassin, which is poetically appropriate at least since the US is the home of noir and it was the French who coined the term. The title is surely the noirest of the noir – both night and the city are key elements of the genre.

But this is London-based, and with a vengeance. Dassin, having fled the House UnAmerican Committee’s McCarthyite witch hunt after taking Twentieth Century-Fox’s Darryl F Zanuck’s advice to make himself scarce and head to London, took full advantage of a gloomy city easing out of a wartime mindset and alive with characters ducking and diving in an attempt to make ends meet.

One such is Harry Fabian (Richard Widmark), a fast-talking grifter hoping to shortcut his way into money, who tries to cut into in the shady world of wrestling. Harry is a tragic figure, as so many noir characters were, his flaw being his desperation to be taken seriously, as a somebody. Girlfriend Mary (Gene Tierney) just wants him to settle down, be normal, happy, get a job etc. But that sort of life is not for Harry, who will eventually find that if you run with the wolves you end up getting bitten.

Tierney, in a fragile mental state, had also been sent to London by Zanuck, who hoped that keeping her busy would stop her losing her mind – it didn’t – but her Mary is one of the very few decent characters in this tight, driving story. Her and her upstairs neighbour, Adam (Hugh Marlowe), a guy who knows how to cook and so is marked out from the start as the sort of domesticated male Mary is looking for – her ideal Harry. This side story – of Mary and Adam – can be ignored. Dassin gives it scant attention and what there is of it seems to have been written in to keep Tierney occupied.

This film is about Harry, first, second and last, and his immersion in a world he knows little about. As we meet him he’s a club tout who’s good at separating men from their money, who works for the husband and wife nightclub-owning team of Philip and Helen Nosseross (Francis L Sullivan and Googie Withers) but is trying to get a toehold on the wrestling scene, which is already all tied up by thug Kristo (Herbert Lom) and his various henchmen.

Harry’s downfall comes as he tries to play off Philip against Kristo, with wife Helen in the middle, but the joys of the film come from watching an update on Dickensian London (Sullivan had recently been in David Lean’s Oliver Twist and Great Expectations, so the face fits). There is also a lot of geezerish proto-Guy Ritchie Cockneyism in Night and the City in other words, characters with names like Bagrag, Mickey Beer, Molly the Flower Lady. Kristo has a fastidiously polite lawyer called Fergus Chilk, who goes everywhere with a goon called Yosh. There’s a wrestler called The Strangler (Mike Mazurki), and a retired wrestling great called Gregorious (played by an actual retired wrestling great, Stanislaus Zbyszko).

Every time Widmark’s Harry says “quid”, slang for “pound”, it sounds like he’s using tongs, but he otherwise slots right in, the paranoid acting style and tendency to shout making him a fine victim, especially once Dassin’s big finale wheels into view, with Harry run-run-running for his life through a night-time central London, from King’s Cross (where Dassin’s movie lights are clearly visible on top of scaffold towers, bizarrely) down to the Thames Embankment.

Though it’s not the great great great movie people often insist it is – there’s just not enough happening in the middle section – there is still plenty to see. Mutz Greenbaum’s nighttime cinematography is excellent, a grungey complement to all those battered faces and spivvy dives, and the central performances really hit the spot, with Sullivan and Withers particularly good as the married couple engaged in subsurface war with each other, and Herbert Lom dry and coldly effective as Kristo.

Widmark, a relatively new face to the movies, was already at the top of his game by the time of Night and the City and would follow up the same year with Panic in the Streets and No Way Out. It took Dassin five years, now properly blacklisted and in France, to deliver his follow-up. But it was Rififi – a stone-cold classic and an influence on every heist thriller since – so no argument there.

Night and the City – Watch it/buy it at Amazon

Director: Jules DassinWriter: Jo Eisinger, Gerald Kersh, Austin DempsterStars: Richard Widmark, Gene Tierney, Googie WithersSummary: Harry Fabian is a London hustler with ambitious plans that never work out. One day, when he encounters the most famous Greco-Roman wrestler in the world, Gregorius, at a London wrestling arena run by his son Kristo, he dreams up a scheme that he thinks will finally be his ticket to financial independence. As Fabian attempts to con everyone around him to get his scheme to work, he of course only ends up conning himself. This is an interesting tale of blind ambition, self-deception, broken dreams, and how a man who always thinks he's ahead of the game ends up tripping himself very badly. —Alan Katz <katz@panther.middlebury.edu>