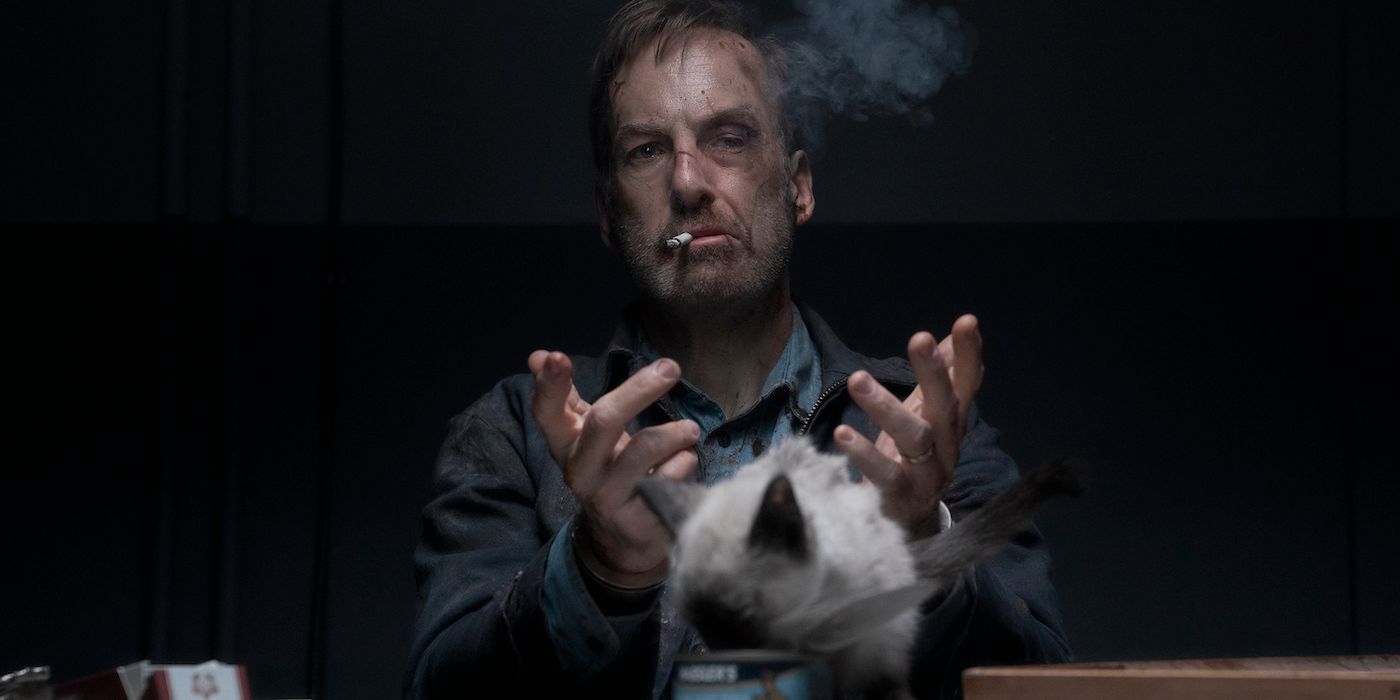 “Who the fuck are you?” two cops ask the bloody guy they’ve got sitting over the table from them, in some sort of interview situation. “I’m, er…” he says. And boom, up on the screen comes the single word in giant letters, NOBODY, and this head-clearing mix of extreme violence and dry comedy gets underway. The nobody is feeding a kitten from a tin of tuna, by the way.

A movie-length flashback answers the cops’ question. The guy is called Hutch Mansell. Director Ilya Naishuller and writer Derek Kolstad quick-cut-montage a picture of his humdrum existence. A suburban husband and father who does the routine things that dads with two school-age kids do, Hutch then does them all again the following day, week and month.

He seems easy-going, meek even, an impression reinforced when a couple of hooded burglars break into Hutch’s house one night, one of them armed with a gun, and Hutch reacts by doing whatever the opposite of manning up is. Even his son is more up for taking on the intruders than Hutch, who has his nose rubbed in it further when the cops arrive and treat him with something approaching pity, as does his swaggering neighbour and his wife’s hothead brother, who presses him into taking a gun. Hutch works alongside the brother at the company owned by his wife’s father. More emasculation.

Hutch, we learn, was once in the army, as an auditor, not “a real soldier”, as his wife woundingly explains to the kids. Though you might be twigging, around this point, after so much insistent set-up, that there might actually be more to Hutch than meets the eye. Especially if you’re au fait with the work of director Naishuller, whose Hardcore Henry was a relentless carnival of point-of-view violence, and writer Kolstad, who invented John Wick.

Hutch is Wick Mark II, and in a classic piece of John Wick plotting, it is the realisation that the burglars stole his daughter’s Kitty Cat bracelet that finally prompts him to engage his inner badass and go on the warpath, along the way tangling with some drunken thugs who have connections to a super badass Russian by the name of Yulian.

Bask in the quiet of the introductory sequence because once Nobody gets going, the violence is as relentless as it is inventive. There’s the odd quip – “Sorry about the mess,” after leaving a room full of dead bodies, kind of thing – but for the most part Nobody is a cavalcade of the sort of scenes more familiar from a confrontation between the Roadrunner and Wile E Coyote.

Bob Odenkirk not only plays Hutch but came up with the rough idea for the film after being burgled in his own home. He trapped the burglars in his basement but it was the underwhelming response of the authorities that got him thinking about how he’d have dealt with the situation if he was more of a “badass”.

Nobody is more in touch with reality than John Wick is. Hutch is no superman and when he gets hit it hurts. Odenkirk is good at this, layering on different levels of character – nice guy on the surface, a very different proposition beneath. There is acting involved, as well as physicality. Even so, Odenkirk trained for two years, apparently, so he could do a lot of the stunts himself.

The fights make use of baseball bats, knives, guns, boiling kettles, tazers, dismantled bits of a bus, cars, and whatever’s to hand, but it’s the close-quarters stuff that’s the most thrilling, when the camera leaves the guys to do their thing. The stunt work is brilliant.

Interesting cast, more interesting than it needs to be. Connie Nielsen as Hutch’s wife, Michael Ironside as his father in law, Christopher Lloyd as his dad, a retired FBI guy who has his own senior moment of “fuck this, let’s get dangerous” late on, RZA as Hutch’s cavalary-to-the-rescue adopted brother and Aleksey Serebryakov as Yulian, who gets one of those great screen introductions – out of an errratically driven car, striding across a road full of speeding traffic, barrelling into a nightclub where, pausing only to hoover up a line of cocaine, he jumps onto the stage for some singing and go-go dancing.

Nods to John Woo come with the juxtaposition of some of the more outrageous scenes of orchestrated mayhem being accompanied by lounge balladeering from the likes of Andy Williams or Steve Lawrence and Eydie Gormé.

Entirely enjoyable, a “tight 90” movie worth watching a few times to savour the ingenuity of the violence and the balletic precision of its deployment.

Nobody – Watch it/buy it at Amazon

Director: Ilya NaishullerWriter: Derek KolstadStars: Bob Odenkirk, Aleksey Serebryakov, Connie NielsenSummary: Emmy winner Bob Odenkirk (Better Call Saul, The Post, Nebraska) stars as Hutch Mansell, an underestimated and overlooked dad and husband, taking life's indignities on the chin and never pushing back. A nobody. When two thieves break into his suburban home one night, Hutch declines to defend himself or his family, hoping to prevent serious violence. His teenage son, Blake (Gage Munroe, The Shack), is disappointed in him and his wife, Becca (Connie Nielsen, Wonder Woman), seems to pull only further away. The aftermath of the incident strikes a match to Hutch's long-simmering rage, triggering dormant instincts and propelling him on a brutal path that will surface dark secrets and lethal skills. In a barrage of fists, gunfire and squealing tires, Hutch must save his family from a dangerous adversary (famed Russian actor Aleksey Serebryakov, Amazon's McMafia)-and ensure that he will never be underestimated as a nobody again. —Universal Pictures