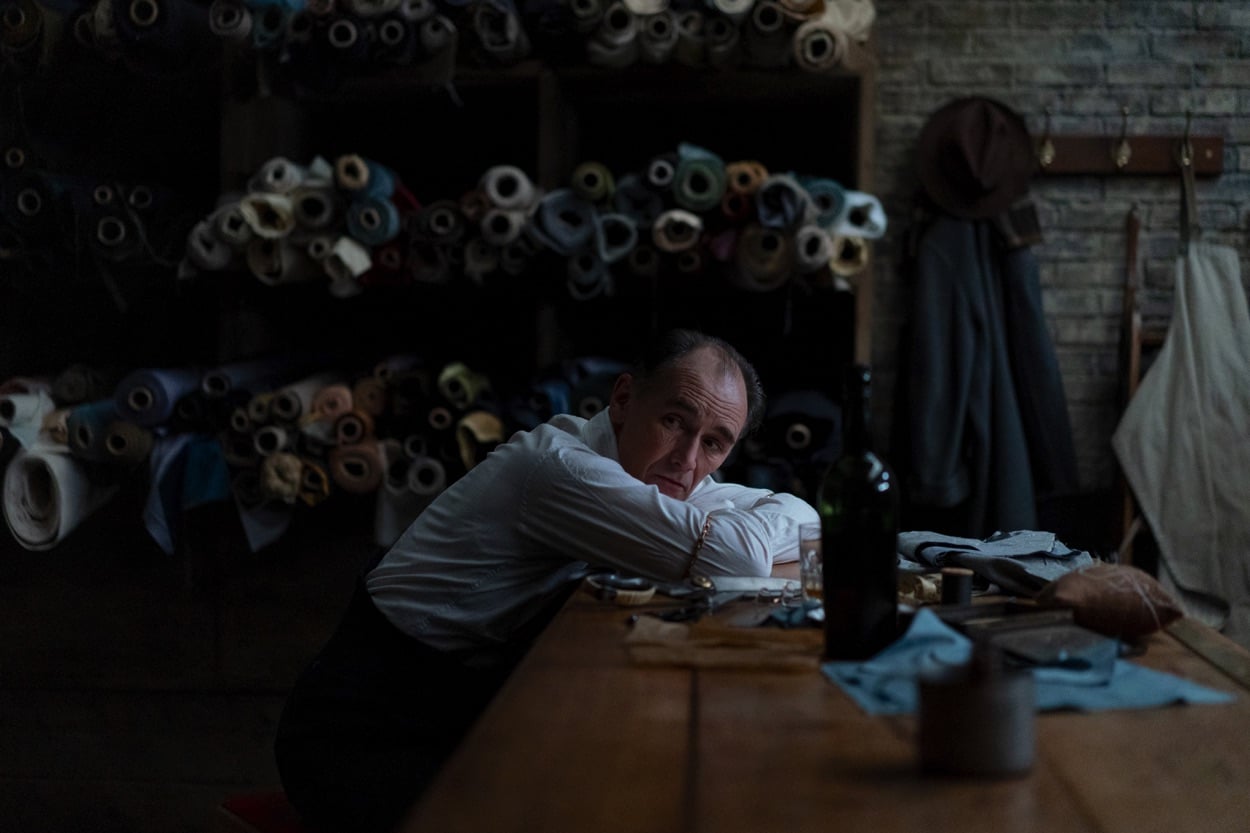 Why didn’t someone think of it sooner? The Outfit – could be a criminal organisation, could be something you’d wear. How about writing a drama that conflates and confuses the two, and make it about… er… a tailor who somehow gets caught up in the work of a criminal establishment.

The conceit is worn transparent in Graham Moore’s debut as a feature director. Like a bespoke suit this is a handsomely assembled item, made from fine materials and put together with care and a conservative eye. It’s also more than slightly theatrical, and it would be easy to imagine events playing out in a darkened small theatre.

Events? A bit of plot. We meet Leonard, aka “English”, a Savile Row cutter (he disdains the word “tailor”) somehow now based in 1950s Chicago, where he acts as something of a front and dead-letter drop for a local mob, whose mooks, Richie (Dylan O’Brien) and Francis (Johnny Flynn) pay him regular calls. It hasn’t escaped Leonard’s sharp if downcast eye that Richie and his secretary-cum-surrogate-daughter Mable (Zoey Deutch) have something going on. Richie is the crime boss’s possibly over-advanced son, Francis the newboy upstart who might… you know… like newboy upstarts tend to in gangster movies. But that all happens later on. For the moment we’re enjoying Rylance playing his scenes with Deutch full of “if I were 30 years younger” pathos.

Later, there is gunplay, some scores are settled, it turns out that the FBI have planted a bug in Leonard’s shop, and there might be a rat – Leonard? Mable? Richie? Francis? Surely not Roy (Simon Russell Beale), the boss kingpin?

There is death and tension but mostly there is a lot of talking, in scenes which Moore and co-writer Johnathan McClain design as one-on-one encounters. In turn each of the actors gets a little masterclass with Mark Rylance. They all do well – Deutch as the sweet, sexy possibly more-dangerous-than-she-looks Mable, O’Brien (suddenly no longer the eternal teenager) as the weak young man hiding in his father’s shadow, Flynn as the smart, ambitious lieutenant… until eventually Simon Russell Beale turns up in scenes where Roy is wondering where his son Richie has got to, leading to what’s designed as the film’s high point. An acting slam between Rylance and Beale. It’s interesting to watch, each man edging the other towards a charge of upstaging by underacting. A kind of theatrical “After you!” “No, after you.”

Three of the five big roles are being handled by Brits – Flynn (born in South Africa, raised in the UK), Rylance, Beale – and along with the theatrical atmosphere generated by the slightly heightened acting style, the performative soundtrack by Alexandre Desplat and the deliberately nicotine/sepia cinematography by Dick Pope, the impression given is of a film flying its theatrical flag proudly.

It’ll come as no surprise to anyone watching that the meek tailor, sorry, cutter, has a bit more backstory than at first appears. There’s a reason why he fled “the Row” and, going back even further, a reason why he found himself on Savile Row in the first place, the home of bespoke tailoring/cutting/whatever. And it helps explain how come a weary and defeated-looking man can actually be one if not two steps ahead of the bad guys most of the time.

It is all very well tailored and finely crafted and the total effect, possibly intentionally, is of being held at arm’s length for the duration. A bit like being fitted for a suit and being turned this way and that as an expert runs a tape measure over your body.


The Outfit – watch it/buy it at Amazon