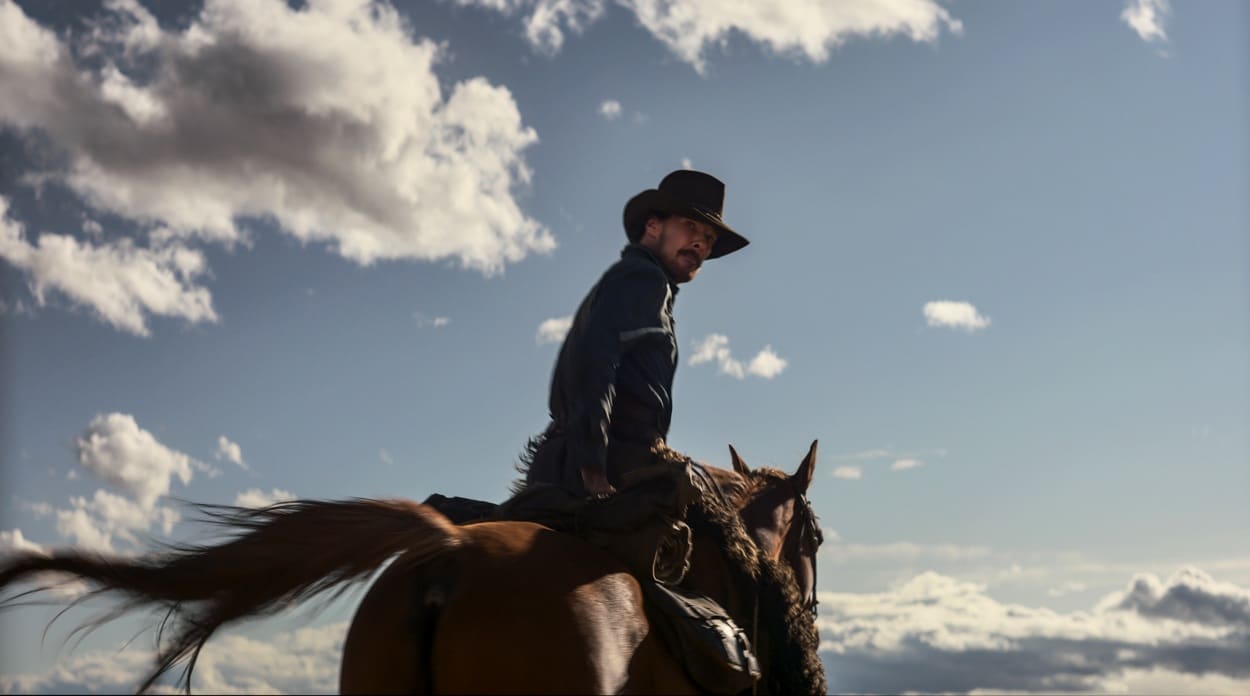 The Power of the Dog

The Power of the Dog makes it five films in nearly 30 years for Jane Campion, plus a TV series and a handful of shorts. She’s not exactly banging them out. And taken at the level of the individual film you’d never accuse Campion of being in a rush either.

It’s Slow Cinema, almost, storytelling done at a languid pace, the power coming from the meditative approach, whether it’s The Piano or In the Cut or Bright Star. Not everyone’s cup of well brewed tea.

But here we are, a western, centring on two brothers, Phil (Benedict Cumberbatch) and George (Jesse Plemons) who run a massive ranch in the 1920s. The influence of the car is beginning to be felt but essentially this is the Old West, when men were men.

Campion looks at first to be telling a story about the wedge driven between the two brothers when the eye of George is caught by the practical, sensible Rose (Kirsten Dunst), a widow who runs a local eatery, and he goes and marries her all of a sudden, not having signalled his intentions to anyone, least of all Phil.

Phil, an ornery cuss at the best of times, seems mightily put out by this development. Perhaps because it upsets the close if fractious relationship between himself and George. Perhaps because it introduces a woman into the grand ranch house he shares with George and their servants. Perhaps also because the marriage brings with it Peter (Kodi Smit McPhee), Rose’s child from marriage number one, a sensitive young man who makes decorative paper flowers and seems entirely not cut out for the very masculine life on a ranch.

Though it at first looks like this is the story of Phil’s hellbent efforts at taking Rose down, belittling her with tiny psychological assaults, in fact it’s more about barely suppressed sexuality and how Rose’s son brings submerged emotions to the surface, with disastrous consequences.

It’s odd to see a film featuring Jesse Plemons where he doesn’t act everyone off the screen but that’s what we have here. George as a character is barely of any consequence, and so Plemons sits contentedly in the background, leaving most of the heavy lifting to the others. Cumberbatch’s gruff bark and sourpuss demeanour seems irritatingly over the top at first, though eventually his “acting” does all entirely make sense. Dunst is the best thing in it as Rose, a woman who was practicality itself while running her own concern but who starts to fall neurotically apart when there’s nothing to do, and does so at alarming speed once Phil’s relentless goading gets into gear. McPhee has the hardest role, as the largely unsympathetic fey young man, a would-be medic with a thing for cutting open animals – he seems like a serial killer in utero. Though that also has a narrative significance down the line.

Dr Freud hovers throughout. In the too-close relationship of the fragile Rose and Peter. In the developing relationship between fatherless Peter and loveless Phil. But most of all out in the barn, where Phil likes to go in moments of high emotionality to polish the saddle of dead ranching legend Bronco Henry, his mentor and who knows what else.

No one is particularly in a rush in this film, neither on screen, where spitting out what needs to be said is the last thing on anyone’s mind, nor behind it. Campion takes it at a leisurely jog, her DP Ari Wegner also leaning back with cinematography that’s all glorious wide open spaces when outdoors and shadowy claustrophobic interiors when inside. Apparently she’s using the same lenses that were used on 1959’s Ben-Hur – Tarantino had them taken out of mothballs for The Hateful Eight. Epic is the idea and New Zealand, standing in for Montana, obliges.

Like Cumberbatch’s performance, Johnny Greenwood’s score – touches of atonality – is irritating at first, until exactly what’s going on is established. At which point the simmering, suggestive sensuality of what Greenwood is about starts to make sense.

It’s not a bells and whistles film. Some gaps have to be filled in by the viewer. That’s going to irritate viewers who don’t give the film their full attention but it’s where the oblique power of The Power of the Dog resides.

The Power of the Dog – Watch it/buy it at Amazon