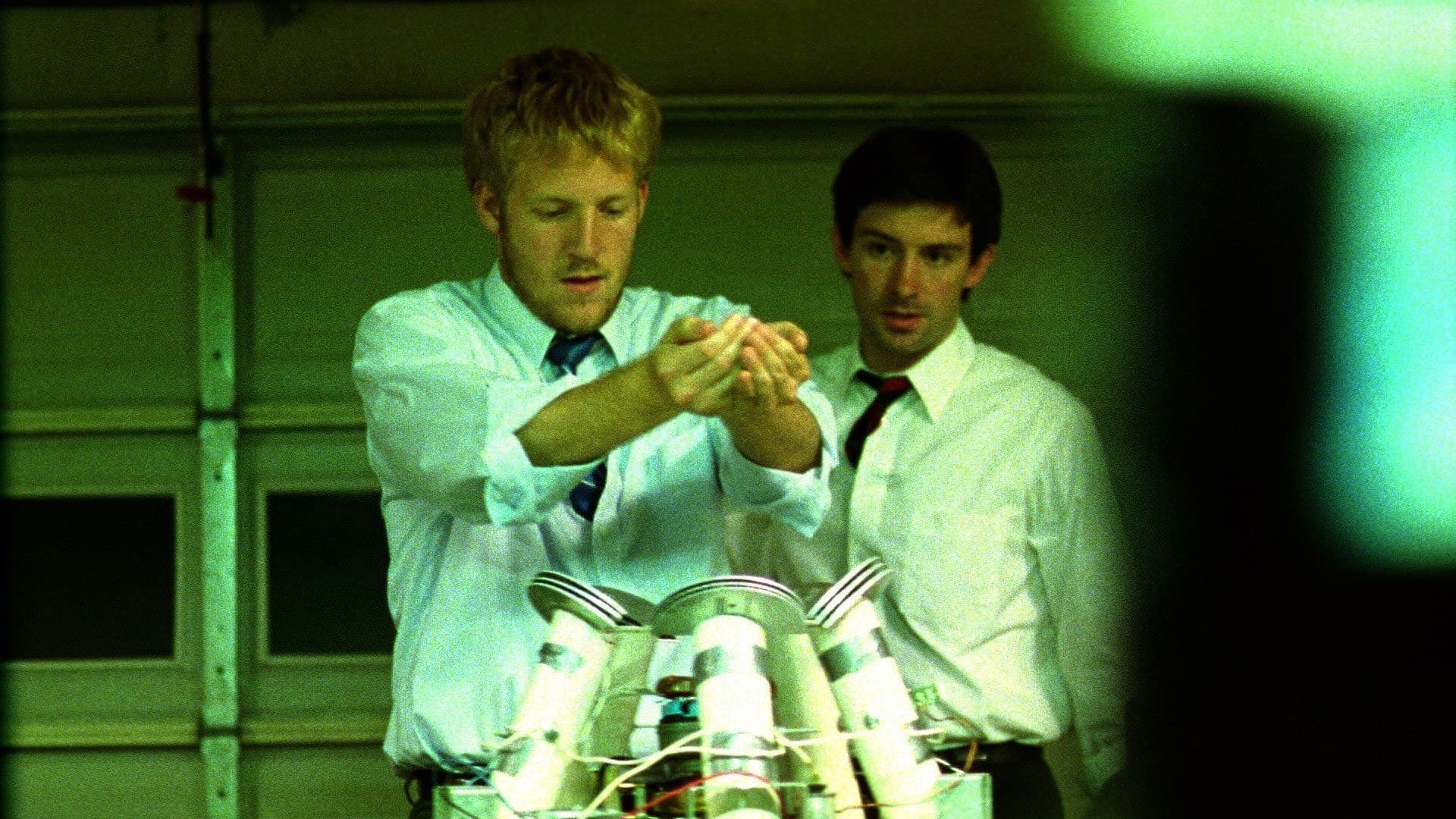 The writer and director Rian Johnson reckons it’s the best time travel movie ever made, and when he was sketching out ideas for Looper sent them to Shane Carruth, Primer’s writer/director/star/composer/producer/editor/production designer/sound designer (and probably a few more roles besides).

Carruth reckoned Johnson had got his time paradoxes and causalities all wrong, which he may well have done. Looper is fairly hard to follow in terms of what happened to which version of a certain person in which timescape, but Primer ties Looper’s comparatively simplistic logic in knots.

Plot? No, hang on. You need to know this movie was made for $7,000, by someone who’d never made anything before, was in fact a software engineer (which might explain the film’s dweeby techiness) and had taken a job as a microphone operator while he was writing Primer just to try and nail down a few of moviemaking’s basic procedures.

The plot actually mimics the film’s genesis. A bunch of guys are trying to invent something in the field of tech and are in the “Steve Jobs and Bill Wozniak in the garage” stage of their entrepreneurial journey, working with nothing, hoping a venture capitalist will come along and finance the next stage of their project, but mostly sweating over technical details, fixing stuff that’s gone wrong, having theory-level debates about the ramifications of what they’re doing, plus the odd beer-and-pizza moment of light relief.

That long sentence reflects the way Carruth drops us in to the world of Aaron (Carruth) and Abe (David Sullivan), Robert (Casey Gooden) and Phillip (Anand Upadhyaya), four guys who stare hard at things, trade jargon-laden sentences and who probably don’t wash as often as they should.

And then two of them, Abe and Aaron, hit on something unexpected. They invent a time machine, by accident, and decide to tell no one about it, not even the other two guys, who essentially disappear from the story at this point (which is handy because Upadhyaya is also the film’s camera operator).

From here things enter the things-going-terribly-wrong/magically-right territory of dramatic jeopardy. Should the guys go into the future and bring back the winning lottery numbers? Or play the stock market? What if they bump into themselves in the future? Or, more to the point, will just existing in the future – even on the lowest of downlows – warp the fabric of causality? And what role for free will in this scenario of predestined futures? Or pasts?

It gets complicated, and at times beyond complicated, and Carruth doesn’t pretend it isn’t. A couple of the conversations Abe and Aaron have are worth replaying a few times, just to disentangle the paradoxes. Good luck.

Seven thousand dollars doesn’t buy a lot of screen gloss. It doesn’t buy any, in fact, but Carruth turns this to his advantage. This is a grungey tale of spoddy guys getting into gnarly adventures and the texture of 16mm film and the use of available light – yukky fluorescents indoors, daylight and street lights outdoors – lends it an authenticity which otherwise only a gigantic Denis Villeneuve-level budget could achieve.

It’s the best no-budget sci-fi movie ever made, surely. Simple, profound, unafraid of hard sci-fi conceptualising and yet, ultimately, turning on old fashioned concepts like integrity, honesty and human decency. Abe and Aaron wrangle over ethics as much as physics.

You can see an influence on Safety Not Guaranteed, the comparatively big budget indie hit directed by Colin Trevorrow and written by Derek Connolly, both of whom have since gone big time (Jurassic World for both of them). Carruth not so much. He’s made one movie since, the bizarre and more wilfully obscure Upstream Color, from 2013, and started and stopped work on several more. Drums fingers.

Primer – Watch it/buy it at Amazon

Director: Shane CarruthWriter: Shane CarruthStars: Shane Carruth, David Sullivan, Casey GoodenSummary: Engineers Aaron, Abe, Robert and Phillip are working on an invention, the prototype being built in Aaron's garage. This project is beyond their day jobs. The project truly does belong to Aaron and Abe, as they use all their free time working on it, primarily trying to overcome the many engineering related problems they've encountered. It is during one of his tests with the invention running that Abe discovers that a protein inside the main unit has multiplied much more rapidly than it could in nature. Rather than the invention being a protein super incubator, Abe, using himself as a guinea pig, and a very meticulous one at that, discovers that the invention can be used as a time machine. In his self experiment, Abe was especially careful not to interfere with his own self in that time warp. Abe passes along this discovery to Aaron, who he expects will tell his wife Kara in what is the sanctity of their marriage, but he doesn't want to tell either Robert or Phillip. Much to Abe's surprise, Aaron does not want to tell Kara, it being a sole intellectual property of just the two of them, in the process moving the base of operation to a locked storage unit. Aaron's plan for the two of them is to use the invention to win big in the stock market by knowing through the time travel what has happened in the market. With two thoughts on the matter now instead of just one, Aaron and Abe may hit some logistical and philosophical roadblocks in how to move forward. —Huggo