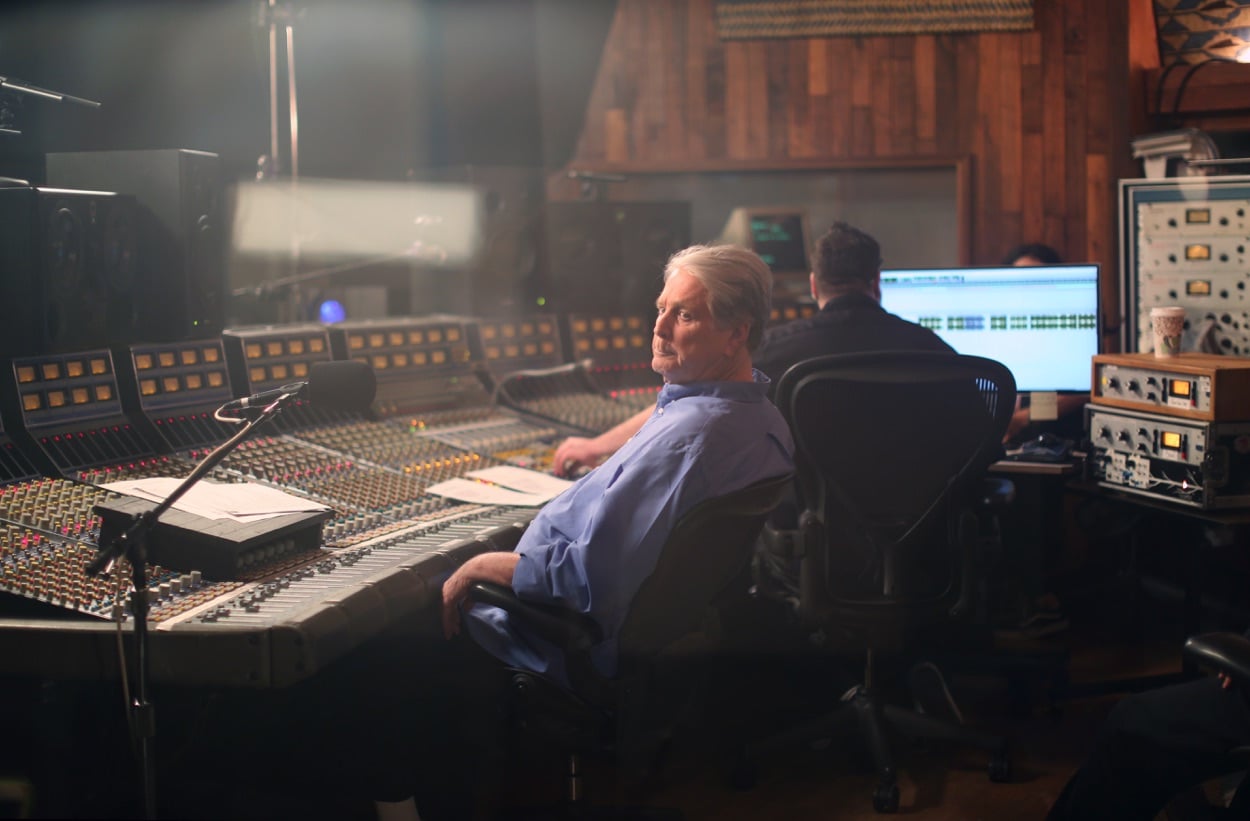 There are two different versions of the same guy on view in Brian Wilson: Long Promised Road, a documentary about the famous Beach Boy that tries to connect the two. And does so, unsurprisingly though nevertheless touchingly, through music.

Version 1 is the Wilson of many an old YouTube clip, the maverick genius who turned the recording studio itself into a musical instrument in the mid-1960s and helped give the music of the era its claims to greatness. This Wilson is young, lively, amusing, driven and voluble, clearly the master of his realm, the writer, arranger, producer and musical director of the band he also performed with and a man who could command a big room full of session musicians, fellow Beach Boys and various hangers-on.

Version 2 is the Wilson of many a new YouTube clip, the old, withdrawn, timid, frail and barely verbal man who seems to be just one of a vast entourage of younger acolytes touring the world, happy to play the hits, basking in a glory of which he seems to be only dimly aware.

It’s the first guy that director Brent Wilson (no relation) really wanted to talk. But since only the second one is available, he makes do. He also wanted to talk to Brian Wilson himself, but when that didn’t work out, he sent Rolling Stone journalist Jason Fine (who’s become close-ish to Brian Wilson over the years) into battle on his behalf.

Realising people will say things in cars they won’t say anywhere else, Fine takes Wilson out, Carpool Karaoke-style, on the road, visiting various places Wilson has lived during his life. These range from the house where he grew up, to Paradise Cove, where the cover for the Beach Boys’ first album was shot, to Laurel Way (where Wilson famously put his piano in a sandpit) and on to Bellagio, “Where I was having mental health problems,” says Wilson, understating almost to the point of absurdity.

With the professional interviewer’s sometimes excruciating neediness, Fine tries to get Wilson to “open up” (as journalists like to say). He doesn’t get very far. An early question sets the tone. Can you explain how your musical creativity happens, asks Fine, in so many words. “It starts in my brain,” explains Wilson. “Makes it way to my fingers… and then (makes wavy motion with hands) out to the speakers.” An effective, coded way of telling someone to ask a better question, or maybe a 1960s musician’s Bob Dylan/John Lennon-style deadpan joke, you decide. Fine bangs away at the same locked door throughout, getting little out of Wilson, who seems for the most part happy to sit in the passenger seat of the car and listen to old Beach Boys songs while Fine drives, as if he were an elderly relative being shuttled to various hospital appointments.

Brian Wilson lives in a state of near panic the whole time and has been hearing voices in his head since he was 21. He has schizoaffective disorder, the doctors say. Fine’s theory, a plausible one, is that for as long as Brian had the confidence of the rest of his band he was able to face the world, safe in the knowledge that there were people who had his back. As soon as his bandmates’ confidence started to waver, with the making of Surf’s Up in the mid-1960s (a song from which gives this film its title), the game was up. Where were the songs about cars and girls, the other Beach Boys wanted to know. What is this hippie shit? Exit Brian MkI and enter the sorry shell that is Brian MkII.

Newbies, do not start here. This is a documentary for people who already know the story of Brian’s fall from the top of the temple into the slough of despond, the long years semi-catatonic under the supervision of the huckster Eugene Landy and Brian’s eventual, slow and partial rebirth after meeting current wife Melinda (an exec producer, with her husband). Long Promised Road works best as a gloss on familiar material, though there are eye-opening “well I did not know that” moments, such as Brian revealing that he’d never heard Pacific Ocean Blue, the increasingly highly regarded album from 1977 by his brother Dennis. Or maybe he had and he had forgotten. Or maybe he was just saying he hadn’t heard it so Fine could direct his excitement at something, anything, that wasn’t Brian.

Fan big-ups come from the likes of Elton John and Bruce Springsteen, Linda Perry, Gustavo Dudamel and Nick Jonas, with producer/musician Don Was more usefully perched by a mixing desk where he’s able to isolate moments from famous songs. Hearing the vocal line of God Only Knows in isolation is to hear it anew, jewel-like in its almost Gregorian clarity.

Connecting Brian Mk1 and Brian MkII is the album Smile, which, after decades in the vaults, Brian decided to dig out and finish, starting in 2004. Watching footage from the time of Wilson rehearsing and performing it is to watch a butterfly drying and inflating its wings in the sun, a partial re-energising of a side of Wilson that seemed to have disappeared.

And watching Wilson at work in the studio today is to see that same Wilson peering out from behind the frame of the shy old guy with the nervous eyes. Somewhere in there is young Brian, saying “I’ve got this,” And the great thing is he has. It’s very sweet to watch, an elegy to the man, and also, incidentally, to an era.