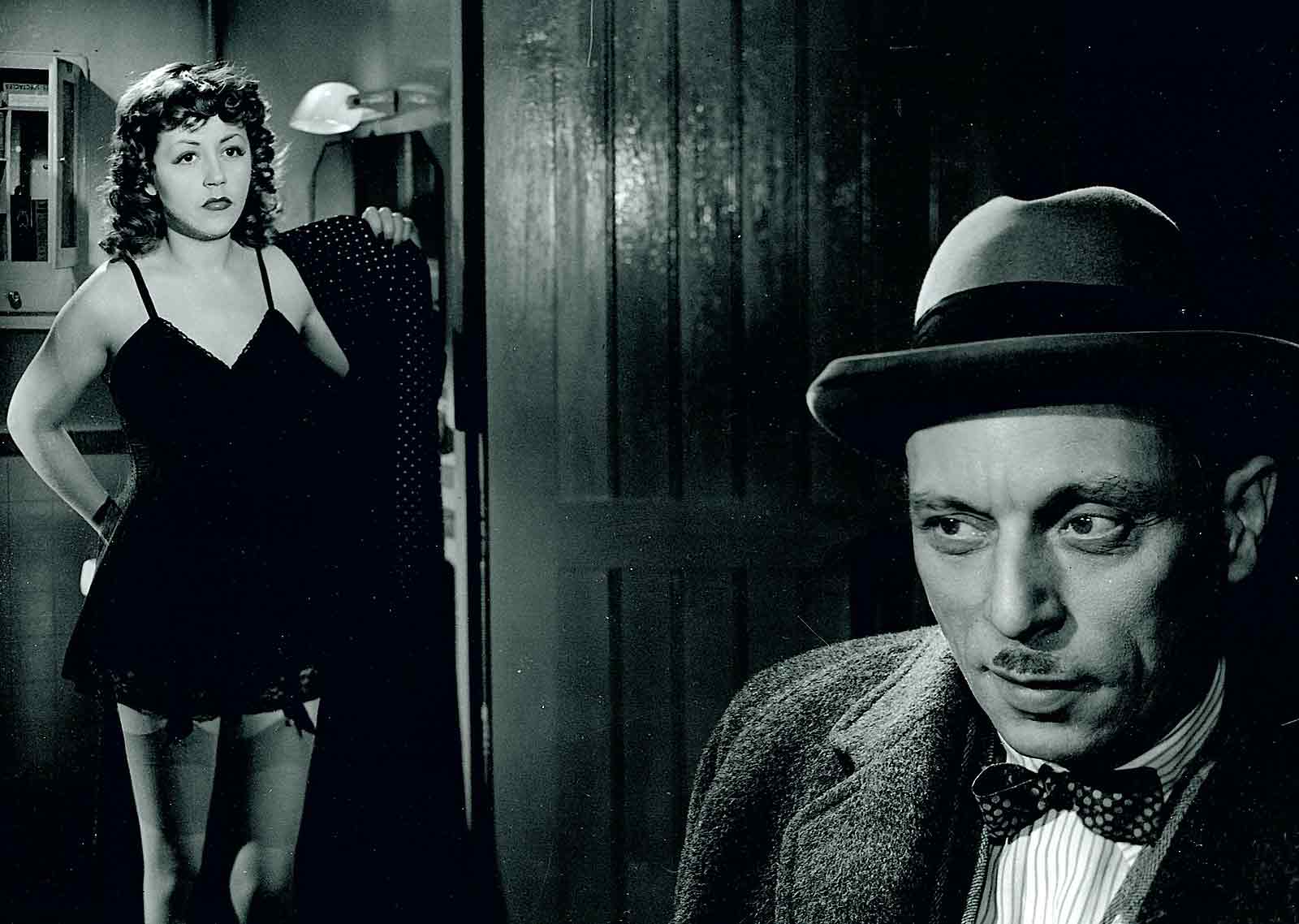 “Quai des Orfèvres” means “the cops” in France in the same way that “Scotland Yard” does in the UK. So it’s no surprise that this classic from 1947 is a crime thriller. It’s a peculiarly knotty one, directed by the masterly Henri-Georges Clouzot, who also did the adaptation, from Stanislas-André Steeman’s original novel Légitime Défense.

Clouzot did not have the novel in front of him as he worked, and had not read it for years, but he took Steeman’s basic idea and fleshed it out using his own characters, getting all sorts of plot details “wrong” as he worked. The result appalled Steeman, who discovered that Clouzot and writing collaborator Jean Ferry had changed the settings, altered the identity of the killer and introduced a lesbian photographer as a key element in “his” story, which is as much character study as policier.

Steeman might have been right to be annoyed about the identity of the killer – Clouzot’s “solution” to the mystery is a bit rubbish – but the setting is a masterstroke. The whole thing takes place inside the world of the Paris vaudeville, where alongside the performing dogs and horses, dancers, comedians and singers, old guys with wandering hands haunt the backstage area in the hope of finding pretty young women in various stages of undress.

This is the world piano accompanist Maurice (Bernard Blier) finds himself in, along with his pretty young wife, Jenny Lamour (Suzy Delair), an ambitious singer who’ll do god knows what to advance her career. As a result of Jenny’s incessant coquettishness every time something in trousers is in sight, Maurice spends most of his life boiling with jealous fury and the rest of it being reassured by his wife that she only has eyes for him. This may or may not be true.

Things come to head when notorious “dirty old man” producer Georges Brignon (Charles Dullin) invites Jenny over to his place to discuss a movie contract. He winds up dead. Maybe Jenny did it and maybe she didn’t, but it’s Georges who’s discovered the body and, knowing the police appreciate nothing more than an open and shut case, realises a jealous husband is obviously going to be the prime suspect. Meanwhile, Clouzot’s invention, the lesbian photographer Dora (Simone Renant), who has the hots for Jenny, helps her construct an alibi and, realising the police will probably finger Maurice, subtly nudges them in the direction of the poor husband.

It is a dark bit of plotting relying on a bleak view of human nature and once the chatty, humane, amused and amusing Inspector Antoine (Louis Jouvet) arrives on the scene, Dora, Jenny and Georges only work themselves into the mire at an even faster rate.

This was Clouzot’s first film since 1942’s Le Corbeau, which he made for a German studio. Le Corbeau is also a darkly plotted movie (the first French noir, some claim) and is capable of being read in several ways, at least one of them condoning the Nazi occupation of France. It got Clouzot banned from making films for five years. Delair, his star and partner at the time, had also been accused of being over-friendly with the Germans. (Delair, remarkably, only died in 2020, aged 102).

Perhaps feeling he and his partner had something to prove, Clouzot turned out a beautiful looking film – all those gorgeously photographed night-time streets. It’s also light as air, moves at speed and finds time for little comic moments all the way through, often in the background, Hitchcock style (Clouzot also storyboarded the whole thing out, Hitchcock style, the first time he’d worked that way). Thanks to the vaudeville setting, musical numbers can be dropped in naturally without straining credibility. Delair can really sing.

Clouzot adds yet another layer by setting the whole thing in the run-up to Christmas (Joyeux Noël was an early title), contrasting the pleasure at the prospect of the festive season with the increasing desperation of the three suspects as the net tightens. Snow falls outside the window of the police station. Ironic snow.

Director: Henri-Georges ClouzotWriter: Stanislas-AndrÃ© Steeman, Henri-Georges Clouzot, Jean FerryStars: Louis Jouvet, Simone Renant, Bernard BlierSummary: Jenny Lamour wants to succeed in music hall. Her husband and accompanist is Maurice Martineau, a nice but jealous man. When he knew Jenny is making eyes at Brignon, an old businessman, in order to get some engagements, he looses his temper and threatens Brignon with death. But Jenny went anyway to a rendez-vous at the old man's, who is murdered the same evening. The criminal investigations are lead by Inspector Antoine... —Yepok