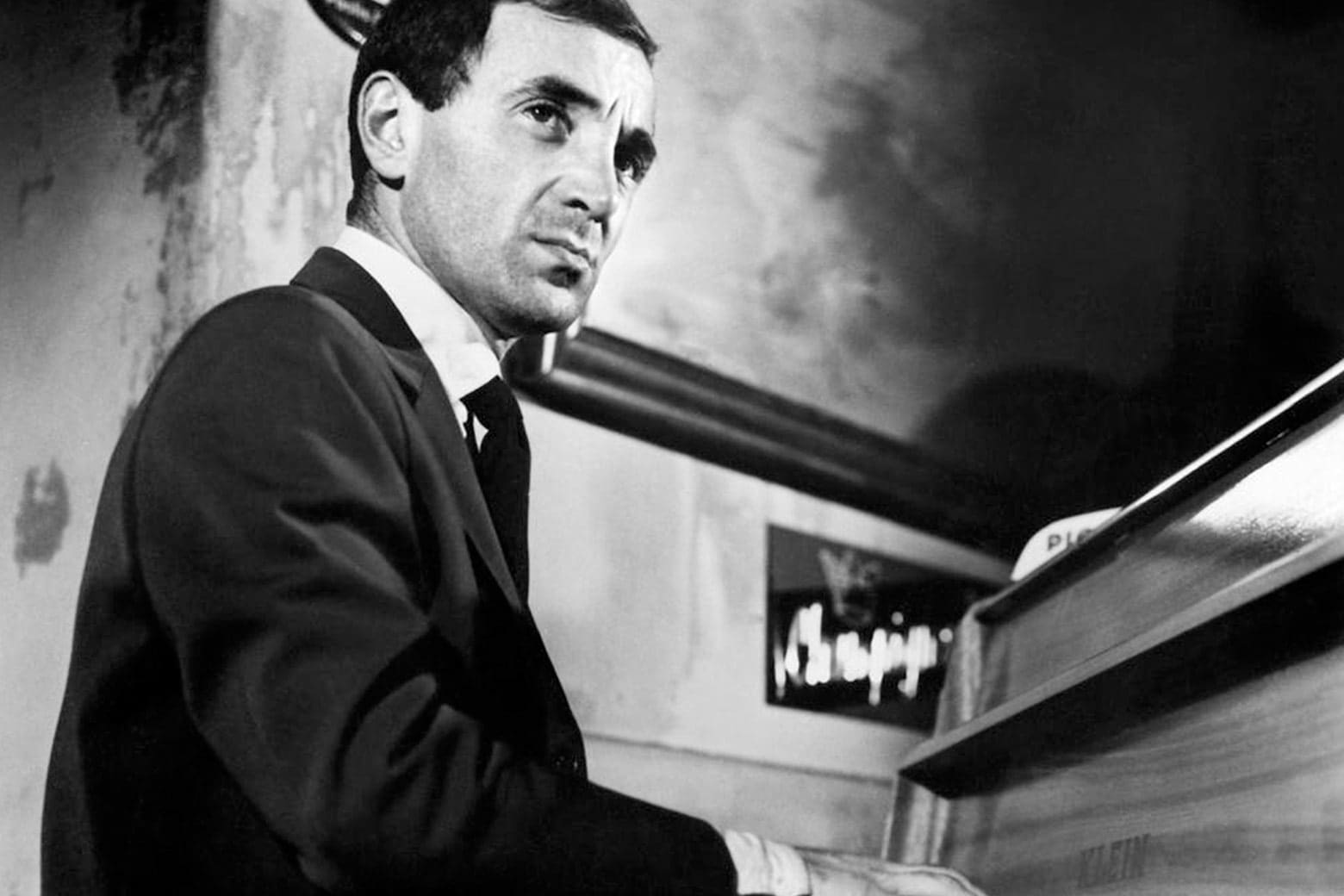 How do you follow a classic like The 400 Blows? With another one, if you’re François Truffaut. Shoot the Piano Player (aka Shoot the Pianist, or Tirez sur le pianiste in the original French) debuted in 1960, one year after 400 Blows had made Truffaut’s name as a director. Just in case there was any doubt about his talent, he’d also written Breathless (A bout de souffle), another classic, with Jean-Luc Godard and Claude Chabrol in the interim.

Let’s get the story out of the way, because in a way it’s not interesting, though the way Truffaut tells it is. Charles Aznavour plays a concert pianist called Edouard Saroyan who meets a young woman, falls in love and gets married, gets an agent and becomes famous, before his wife tells him something that destroys his life. Edouard, suffering what amounts to a breakdown, disappears, renames himself Charlie and takes a job in a bar playing honky tonk tunes for drunk customers.

Truffaut tells the story as if it were a gangster thriller, with the action opening as a man is chased down dark streets and into the bar where Charlie is playing. The man, Chico (Albert Rémy), turns out to be the brother of Charlie (aka Edouard) and he’s on the run because he’s stolen some money from some gangsters, who will spend the entire film attempting to recover it, from Chico, from Charlie, or from anyone Chico or Charlie knows, including Charlie’s son, Fido (Richard Kanayan).

Truffaut isn’t just messing with the chronology, starting the film halfway through the story and then ducking back in time to flesh out the story of Edouard and Thérèse (Nicole Berger), he’s also messing with genre. This isn’t a thriller and that opening gangster element of the running man and the faceless bad guys after him is a Hitchcockian device – think Cary Grant in North by Northwest – whittled back to the slenderest thread capable of supporting his story, which is more about human relationships and an artist’s relationship to celebrity. Any relationship to Truffaut’s sudden celebrity status surely not accidental.

It was written as it was being shot, on the fly, with the lithe camera of DP Raoul Coutard (a New Wave fave) alighting on characters as if it had just accidentally happened upon them in a cafe. There’s a bricolage quality to the entire thing, emphasised by the fact that Charlie and Chico are names out of comedy (Chaplin and Marx) and the gangsters trade lines about women’s underwear rather than who they’re going to waste next. Here Truffaut is laying down a scent trail for Quentin Tarantino and his loquacious bad guys. Momo (Claude Mansard) and Ernest (Daniel Boulanger) could easily be repurposed as characters in Jackie Brown or Pulp Fiction.

Lively, fast moving, playful and free, it’s a visually driven film full of New Wave stylistic tics like jump cuts, but Truffaut also throws in split screens, cutaways reminscent of silent-era comedies, thought bubbles, and sudden close-ups. Even without the gimmicks, this is a film that’s amazingly fast on its feet. Compare it to a Sam Fuller film from the same era (Truffaut was a big fan), like Underworld USA, and Truffaut is streets ahead.

The magic, the radicalism of what Truffaut is doing has been absorbed away into the mainstream over the years, which leaves us able to focus more on the content than the style of Tirez le pianiste. A second order magnificence asserts itself – Aznavour’s minimalist performance as Charlie, an avatar of the painfully shy Truffaut, a troubled man being buffeted by life and paying the price for his lack of agency.

Shy maybe, but a hit with women – the wife Thérèse (Nicole Berger), Léna, the café waitress Charlie later takes up with, and Clarisse (Michèle Mercier), the prostitute who acts as a surrogate mother to Charlie’s/Edouard’s son and shares Charlie’s bed. Sex, and nudity (this is where the arthouse/porn crossover starts) being all part of the lively mix. Add in a few jangly tunes on the old piano, and, well, vastly entertained.

Not bad at all, considering it’s a tragedy that ends in death.

Shoot the Piano Player – Watch it/buy it at Amazon

Director: FranÃ§ois TruffautWriter: David Goodis, FranÃ§ois Truffaut, Marcel MoussyStars: Charles Aznavour, Marie Dubois, Nicole BergerSummary: Once a successful concert pianist under his birth name Edouard Saroyan, Charlie Koller is now a pianist playing honky-tonk music in a sleazy Paris bar owned and operated by Plyne, most in Charlie's current life who do not know of his past as that concert pianist. This new life, where he is caring for the youngest of his brothers, minor Fido Saroyan, is to escape the pain associated with that past life, which included a marriage to waitress Thérèse Saroyan. Charlie has always been a shy, reserved man, coming out of that concert pianist life which has made him retreat further into his shell where he only feels comfortable behind the keyboard. Besides Fido, the only person of any meaning in Charlie's life is his neighbor, prostitute Clarisse, who, in addition to looking after Fido when needed, is solely there as his paid bed partner in his need for some human connection. Charlie's life becomes more complex with two developments. First, he and Léna, a waitress at Plyne's, start to fall for each other, her interest in him which he first learns from Plyne, who admitted to him that he too was attracted to her but that he knew she would never be attracted to him. And second, Charlie's oldest brother, not very adept criminal Chico Saroyan, comes looking for his help in eluding two criminal associates, Momo and Ernest, who he and their last brother Richard Saroyan bilked in what was their one and only job together. —Huggo