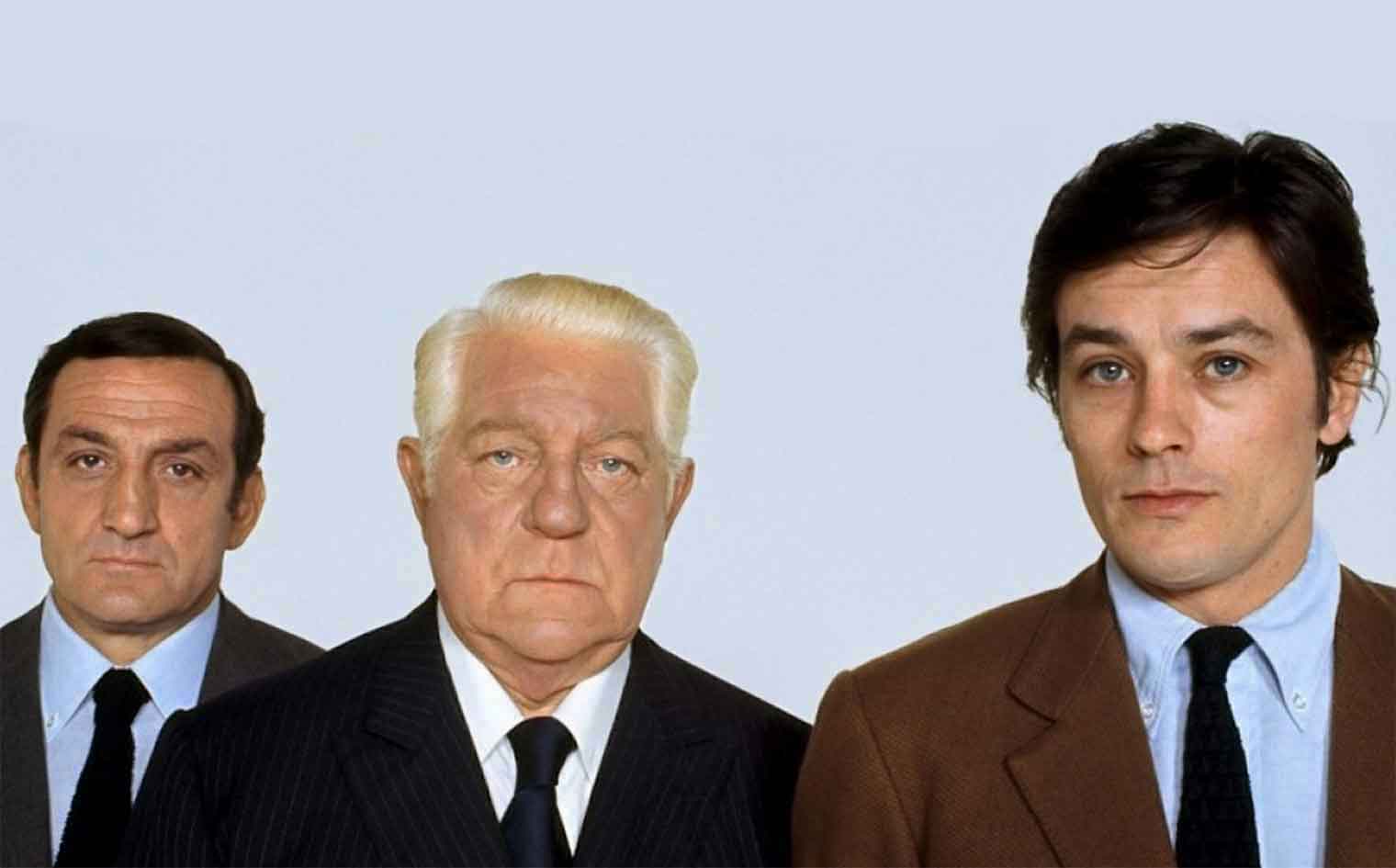 The golden age of hijacking (1968-1972) was just peaking in 1969 when The Sicilian Clan (Le Clan des Siciliens) debuted, a French heist movie itself hijacked – twice! – by a plot involving the illegal commandeering of a plane and by a superannuated screen star who really shouldn’t be in it.

It’s really, at bottom, one of those heist movies in which security cameras, pressure sensors, alarms, iron bars, motion sensors and all the modern security paraphernalia have to be overcome by a gang smart and greedy enough to have a go.

And that looks to be exactly what we’re getting as first our main guy, Roger Sartet (Alain Delon), is introduced, a ruthless jewel thief and multiple murderer breaking out of a police van using what looks like a 1960s Dremel prototype (battery-powered, implausibility fans) to cut through the floor.

While Roger re-aquaints himself with the life outside, girls, good times etc, the focus shifts onto “the Sicilian”. A gruff, white-haired Jean Gabin plays Vittorio Manalese, the Italian gang leader who organised the escape. Vittorio has dreams of moving back to Sicily, where he’ll live out his days surrounded by folk from the old country. But first, in time honoured style, one last job.

And shifts also to Commissaire Le Goff. A gruff, dark-haired Lino Ventura plays the cop who’s just given up smoking and is struggling with withdrawal, his normal tetchiness only amplified by the cravings. Le Goff wanders through most of the movie with an unlit cigarette in his mouth.

Also in the mix is Irina Demick as the Sicilian’s daughter in law, a character so underwritten that Demick complained to 20th Century-Fox studio boss Daryl Zanuck. And since she was sleeping with him at the time, her part was beefed up a bit. I say “a bit” but really there’s not much for her to do, which is a shame because Demick is a good actor and her character had stuff to do in the original book by Auguste Le Breton, who had also written the novel Rififi and the screenplay for Bob Le Flambeur.

In late 1960s style this is a good-looking, brightly-lit movie, the brilliant Henri Decaë the cameraman (he also did Truffaut’s The 400 Blows and Melville’s Le Samouraï), with direction and screen adaptation by Henri Verneuil, who looks like he’s trying to “do a Melville”.

He gets part of the way there, with some beautifully observed interiors – interiors of big shiny plastic lampshades, wallpaper with big bold patterns, orange bedsheets. Outdoors it’s cops in white macs, many of them driving a Citroën DS. No American cars, though, that would be overdoing the Melville-isms.

It’s all very stylish. Talking of which, the soundtrack is by Ennio Morricone. And if 1969 was peak hijacking, it was also peak Morricone. He scored no fewer than 21 movies that year, and though Morricone could work at speed, you’ve got to ask whether a jew’s harp and whistling arrangement – which is what he delivers here – is right for a film that’s low on whimsy, devoid of irony and deadpan to the max.

As said, it looks like it’s going to be a standard heist movie, perhaps a less chirpy FrancophoneThe Italian Job. Think of Delon as Michael Caine and Gabin as Noel Coward.

Talking of Gabin – Vittorio meets up with old Italian fixer Tony Nicosia (Amadeo Nazzari, brilliantly smooth in his scant screen time) and together they scope out the Villa Borghese in Rome, where a vast amount of jewels are on display. Only to conclude that, no, it’s too difficult to pull off a job like that, so let’s steal the jewels instead while they’re in transit on a plane from Rome to New York.

Never mind that the pleasures of the heist movie come from watching clever types overcoming impossibility.

And on we go, into the endless last act, on the plane, where it becomes even more obvious than it has been all along that the great Jean Gabin should not be in this movie as much as he is. Clearly his role has been amplified because it’s Gabin, leaving the elemental cop-versus-thief struggle between Lino Ventura (the best thing in the film) and Alain Delon hanging in the wind.

Sadly, it’s a bit of a non-event. The New York Times thought so in 1969 – “a tired example of a tired genre” – and time has not made it any better.

That said, watch it for the stars. Particularly Ventura, who’d have stolen the film if the Sicilian hadn’t hijacked it already.

(On a complete digression, I wondered if Morricone’s score – inappropriate it may be, but it’s still fantastic – was the inspiration for the theme tune to the German comedy show Der Tatortreiniger. Maybe?)

The Sicilian Clan – Watch it/buy it at Amazon