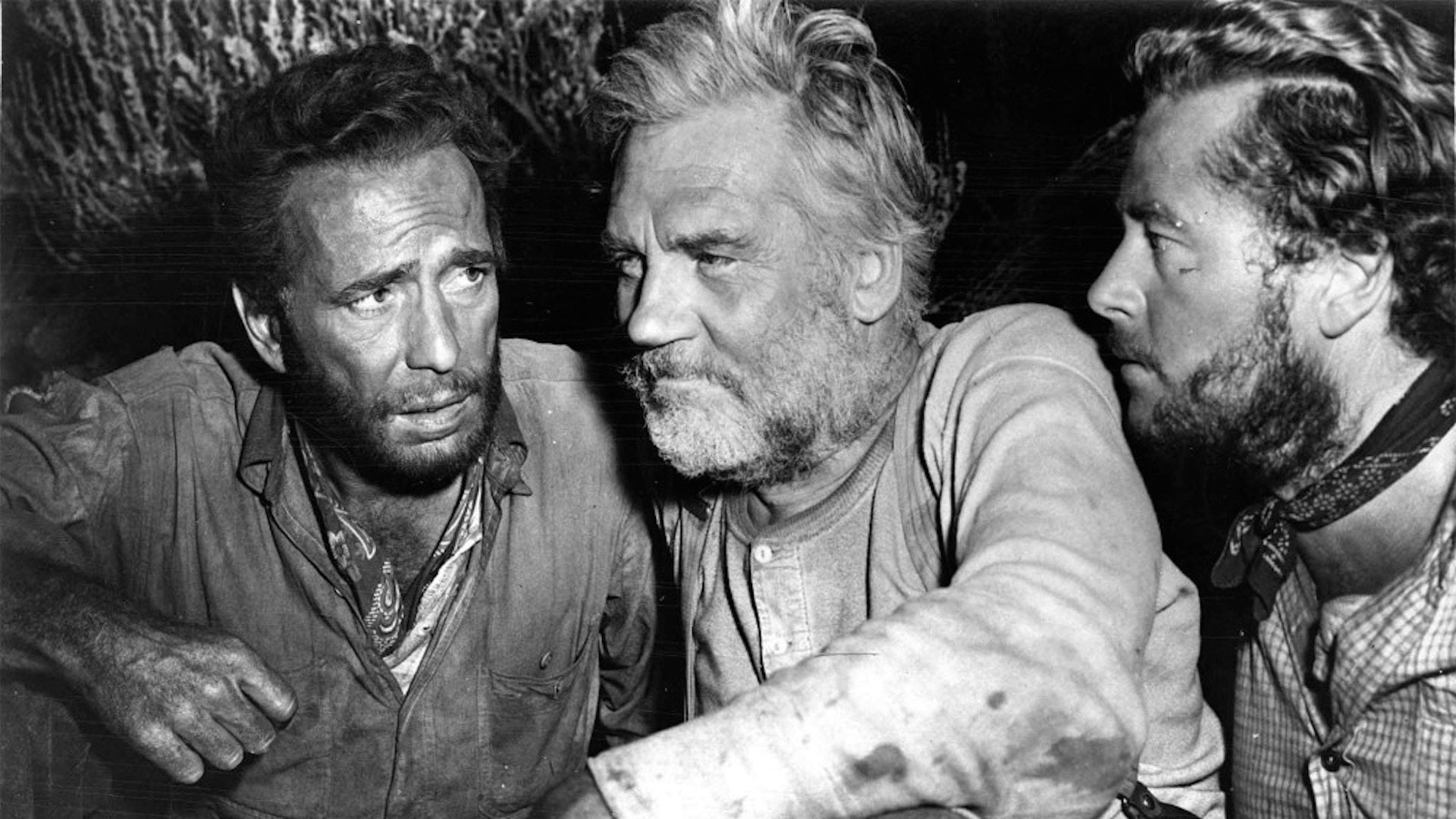 The Treasure of the Sierra Madre

By general consent a classic, The Treasure of the Sierra Madre also won three Oscars – best director and screenplay for John Huston and best supporting actor for Walter Huston (his father) – and is one of those films that also get film-makers dewy eyed. Stanley Kubrick named it one of his faves (in 1963 anyway). Robert Redford ditto. Sam Peckinpah was a big fan. Lucas and Spielberg borrowed the look of its star, Humphrey Bogart, as the template for Indiana Jones. The hat, stubble, jacket, pants and boots all probably look better on Harrison Ford, but neither Bogart nor Huston Jr was aiming for matinee appeal with their movie, and that’s the point.

It’s an ugly movie with an ugly premise: people are full of fine words and fancy ideals when they have no money. But give them some and watch what happens. The action kicks off with Bogart’s Fred C Dobbs as a down and out begging for dollars from passing gringos in a godforsaken Mexican town called Tampica. Having been bilked out of some hard-earned wages by local swell Pat McCormick (Barton MacLane) – and having taken revenge by kicking the shit out of McCormick in a bar fight that’s unusually brutal as well as plausibly scrappy and unpleasant – Dobbs ends up shipping out with new friend Curtin (Tim Holt) and old timer Howard (Walter Huston) to search for gold in them thar hills.

John Huston adapts the novel by the mysterious B Traven, but the bones of the story can be traced back at least as far as Geoffrey Chaucer’s Canterbury Tales, where, in The Pardoner’s Tale, three guys set out to kill death, find gold, and wind up killing each other. Traven and Huston’s twist is that the three guys just set out to find gold, but the end result is kind of the same. Radix malorum est cupiditas, as the Pardoner summarises – Greed is the root of all evil.

At first all three men are bosom compadres and full of noble sentiment. But they’re put to the test when they find gold, so quickly that it’s obvious the story isn’t about gold at all. It’s character, human decency, personal integrity that’s at stake, and in this respect it’s Dobbs who fares least well, rapidly going all swivel-eyed as his paranoia about his newfound wealth starts to grow with each little baggie of gold dust he accummulates.

Enter a passing stranger suspicious about what the men are up to. Enter also some passing banditos. Temporarily the three men are back again as a tightly functioning unit, but essentially this is the story of a good thing going bad.

Why didn’t Bogey win the Oscar? He is the star of the film, and this story’s pivot, but there is something a bit too boggle-eyed about his descent from decency to slavering paranoia, and Bogey signals which way he’s going way too early. Walter Huston deserves his win as the wise old head who’s seen it all, and the running joke about this old timer being fitter and better at everything (including morality) than the younger guys is a good one. Holt comes out of it least well, looking constantly like an actor waiting to say his line rather than a man out in the hills prospecting.

It’s a great looking film, shot by Ted McCord in a lush black and white. He was a DP who did everything from 1930’s Son of the Saddle to 1950’s Young Man with a Horn to 1965’s The Sound of Music and he excels here, even shooting on location in Mexico, which was unusual for a Hollywood movie at the time. There is also studio stuff, and it’s obvious, but the exteriors in Tampica are genuine and it gives the film an authenticity that became John Huston’s hallmark – he shot Moulin Rouge in Paris, The African Queen in Congo and Uganda, The Misfits out in the scorching Nevada desert.

Movie boss Jack Warner wasn’t a big fan of the finished product, which was more a critical hit than a financial one. He had apparently thought he was getting a B movie. But the film both lives on in the annals and maintains a modern relevance. Daniel Day-Lewis based his character of Daniel Plainview on Bogie’s Fred C Dobbs, both of them men turned into monsters by the love of money – radix malorum etcetera etcetera, as the Latins had it.