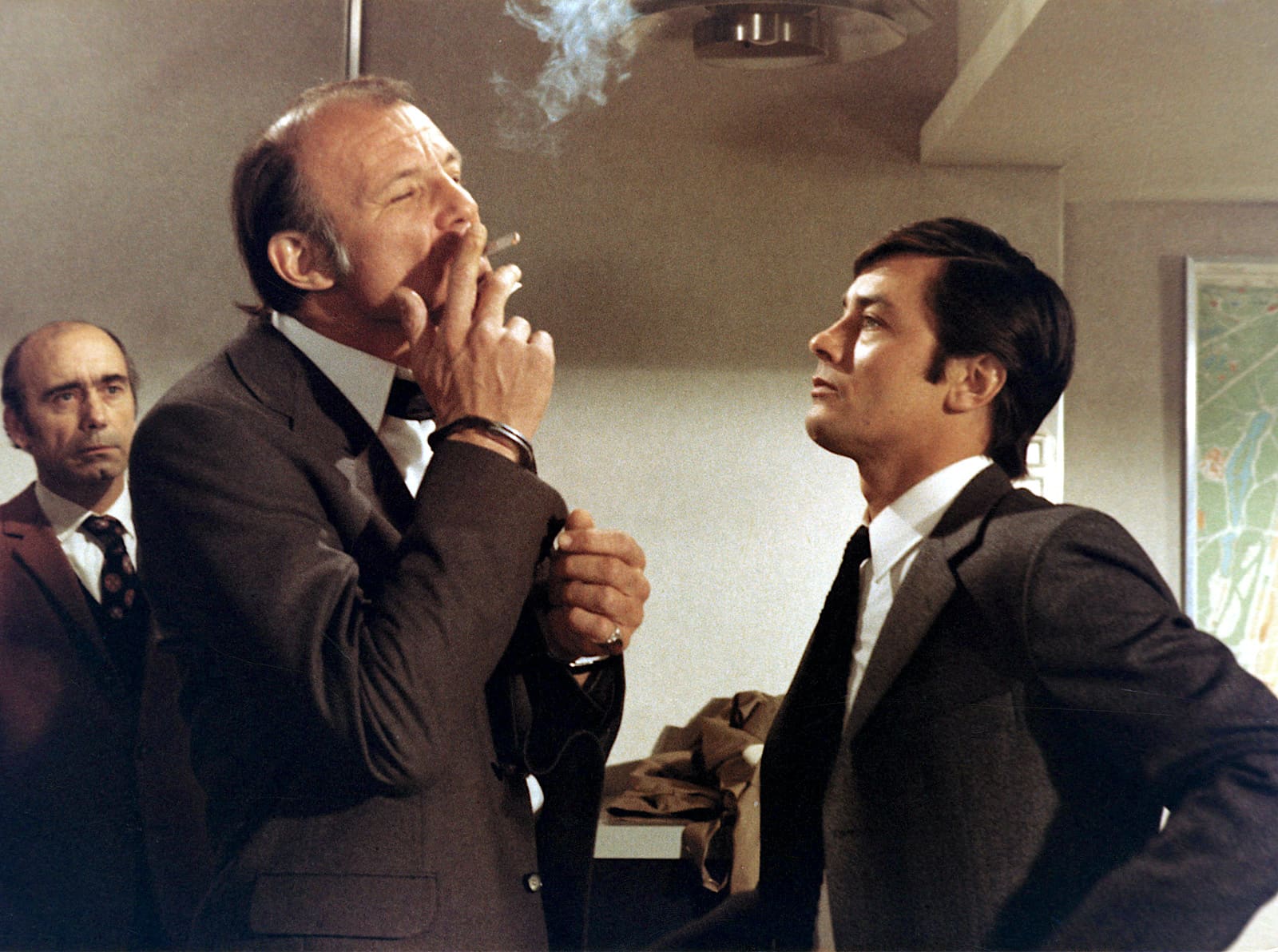 A Cop – the title is just as bald in French, Un Flic, and in opening scenes featuring a bank job carried out by clichéd robbers in trench coats and wearing hats, the writer/director Jean-Pierre Melville appears to be having a bit of a laugh, possibly at his own expense. Who, in 1972, was still wearing a hat? Why are three men who are trying to appear as if they don’t know each other all dressed the same way? Who, planning a bank job in a small town in Northern France, decides a big wallowy American car is the ideal getaway vehicle?

The bank job goes wrong. A teller is killed. One of the robbers is wounded and needs a hospital. Meanwhile, in Paris, an implacable cop, taciturn as they come, is driving around Paris trying to bring order to the chaos that bad guys like these cause.

But look again at that opening bank job. How Melville shoots it. The lenses, the compositions, the lighting, the choreography, in particular the edits. Later, we go with this cop with an American name, Coleman, to a club run by a guy he knows called Simon (Richard Crenna). Simon is the heist guy and though we know it, Coleman doesn’t. Simon has a girl, Cathy (Catherine Deneuve), one of those pretty, wide-eyed blondes who wonders whether she wouldn’t rather be with the cop than the bad guy.

This is the last film of Jean-Pierre Melville, who’d been making films like this for decades – guys in trench coats, American cars, characters with American names, troubled floozies wondering if they’ve made the right choice in life, bad guys with an almost ritualistic code of honour. It’s the third he’d made with Alain Delon in the lead, though here Delon is playing the cop rather than one of the bad guys, as in Le Samouraï and Le Cercle Rouge.

The clichés, the tropes, are Melville’s raw material. He uses them like a poet uses words, to spin something fabulous from the connections between as well as the tropes themselves. There are many good reasons for watching this film. The acting is just right. The locations (that wintry Northern French town being pummelled by a gale in the opening sequence, for instance) are eye-catching. And the action – later on there’s an almost wordless heist done in real time (20 minutes) on board a train – is so brilliantly conceived that it doesn’t matter that Crenna looks too old to be doing it, or that the helicopter he’s hanging from, and the speeding train he’s trying to land on, are obviously models.

But the main reason to watch is to see an absolute master at work, choreographing every camera zoom and dollie, every move by every person. Though his American DP Walter Wottitz is obviously no rookie (he’d won an Oscar for 1962’s The Longest Day), so much of Meliville’s film-making actually takes place in post production, when he and his editor, Patricia Nény, put it all together.

Barely a word is said in this film, so little that it’s obvious it’s another of Melville’s little jokes. Delon hardly speaks, Crenna husks out a few words (handy, because he’s being dubbed into French), Deneuve gets a couple of truncated lines. It’s minimal, it’s nihilistic, it’s composed entirely of elements we’re already familiar with.

One element is none of these things. One of the cop’s snitches, a cross-dressing man who goes by the name of Gaby (Valérie Wilson) gets a couple of scenes with Coleman in which it becomes clear that Gaby might have a thing for the cop, and, who knows, him for her? Gaby has hair that’s white-blonde, just like Deneuve’s. Draw your own conclusions.

Another is one of the robbers, Paul (Riccardo Cucciolla), a bank employee gone bad, whose relationship with his wife is touched on in a couple of scenes which, like the Coleman/Gaby scenes, add a sudden weight of backstory, colour in a largely flat monochrome world.

Melville, like Claire Denis, appears to operate at the level of the ineffable, like a magician. How is he doing it? Why is this seemingly normal story so powerfully taut with suspense? In short, what a brilliant film. One year later Melville was dead, aged 55, halfway through conceiving his next film. What might have been.