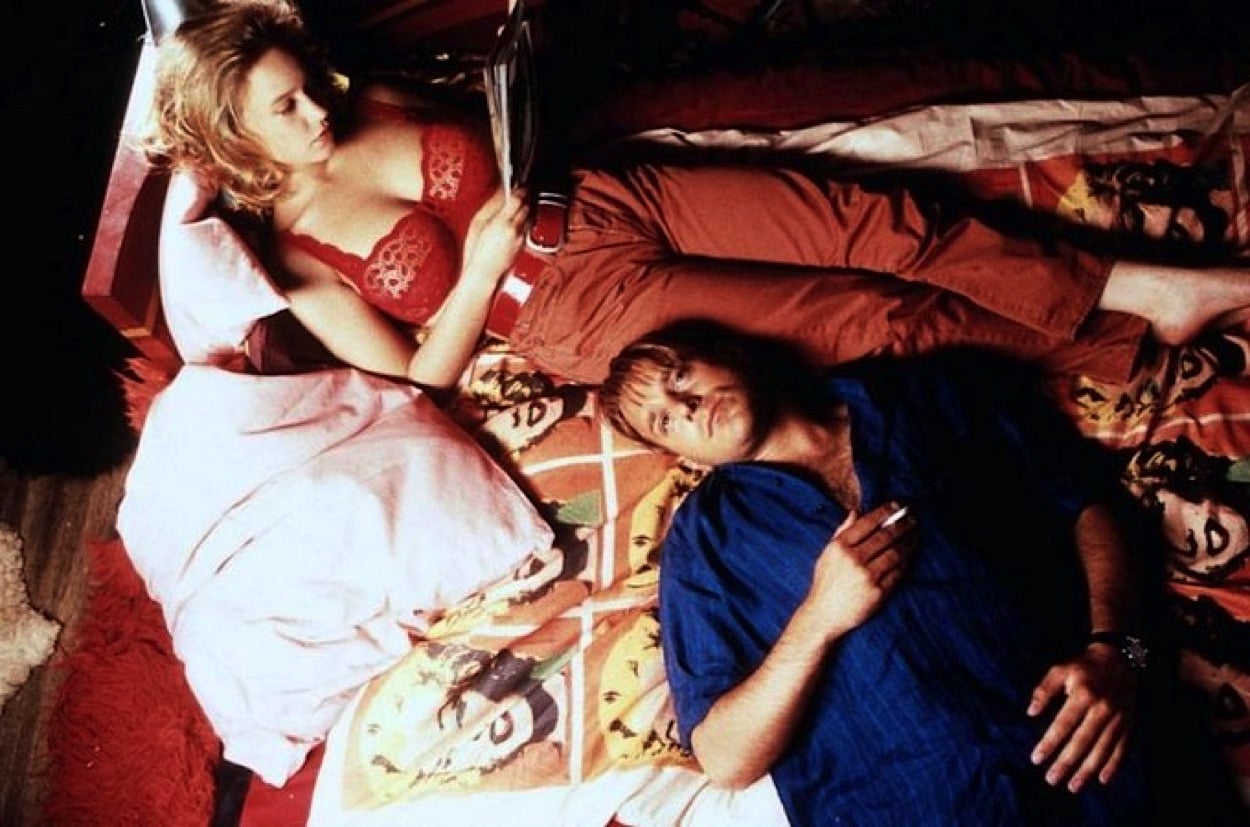 In 1997’s Winter Sleepers (Winterschläfer) German director Tom Tykwer warms up the engines for his breakthrough hit, 1998’s Run Lola Run. There are fewer tricks here, not as much visual pizzazz, the fourth wall remains unbroken, and yet Tykwer is clearly up to something as he spins out a tale of two different couples, one whose relationship is in the hot flush of urgent sexual need, while the other two at the outset don’t know each other at all. On the one hand a blond pair who seem bright and charming and a dark pair whose standoffishness looks like it might be dooming them to a life at one remove from the action.

But first Tykwer sets off his Maguffin. Blond and handsome ski instructor Marco (Heino Ferch) arrives at the plush chalet his hot and similarly blond girlfriend, Rebecca (Floriane Daniel), shares with its owner, her friend Laura (Marie-Lou Sellem). As soon as he gets there, Rebeccca drags Marco into the chalet for some hot boyfriend action, so urgently, in fact, that Marco not only leaves the keys in the ignition of the car but the door ajar. So when Rene (Ulrich Matthes) happens by on his long snowy trudge home on foot the beckoning car is simply too much of a come-on. He steals it, having first also stolen a snap of the copulating pair through a crack in the curtains. Rene seems like a bit of a creep.

Within minutes the car has crashed into a car towing a horse box. The driver is unconscious, his daughter is severely injured and so is the horse. Rene, having careened off the road into a snow drift, has pulled himself from the car and made good his escape, leaving the injured man, daughter and horse behind. Rene seems like a lot of a creep.

The Maguffin is the injured man, Theo (Josef Bierbichler), a decent local farmer, trying to find out what literally hit him, persisting through police indifference – the offending car is in a drift and can’t be seen, so maybe Theo just skidded on the icy road, they suggest. He’s fairly sure, through the fog of the accident, that he didn’t and that something/someone hit him.

Theo wanders through the rest of the film, popping up periodically, trying to get a handle on events, in what is otherwise a straightforward relationship drama in which Rebecca starts to have her suspicions about Marco, in spite of his hunkiness and all, while the awkward car thief Ulrich, who is a cinema projectionist (hence that cineaste joke about him being a voyeur), quite by chance gets close to diffident nurse (and part-time actor, cue another joke) Laura (Marie-Lou Sellem). Two relationships, two different directions of travel – hot to cool, cool to hot.

Tykwer colour-codes his characters for reasons that don’t seem entirely clear. Rebecca wears red, Marco is in blue, Rene in black and Laura in green. It is an interesting stylistic decision and, if we’re couning the Maguffin, the second gimmick Tykwer has deployed, clearly nervous that the two relationships aren’t quite enough to keep things moving.

He’s right, and the gimmicks do help. There are also a couple of revelations to spice things up, in particular about Rene, who might not be quite the creep he at first appears, even though he’s dressed in movie-villain black.

Tykwer knows how to make good-looking images. From Run Lola Run and Perfume: The Story of a Murderer to Cloud Atlas and Babylon Berlin. And Winter Sleepers is a good-looking film, drenched in warm glühwein tones that emphasise the cosiness of the chalet existence in a ski resort, and counterpointing two relationships, neither of which you’d characterise as snuggly.

Snuggles isn’t really what Tykwer is offering. As Winter Sleepers finishes, some loose ends have been tied up, but others are left dangling. A key injustice remains unresolved. Closure is not always easy. Tykwer is more interested in the knot of a problem than its solution, questions not answers. See Run Lola Run for further evidence.