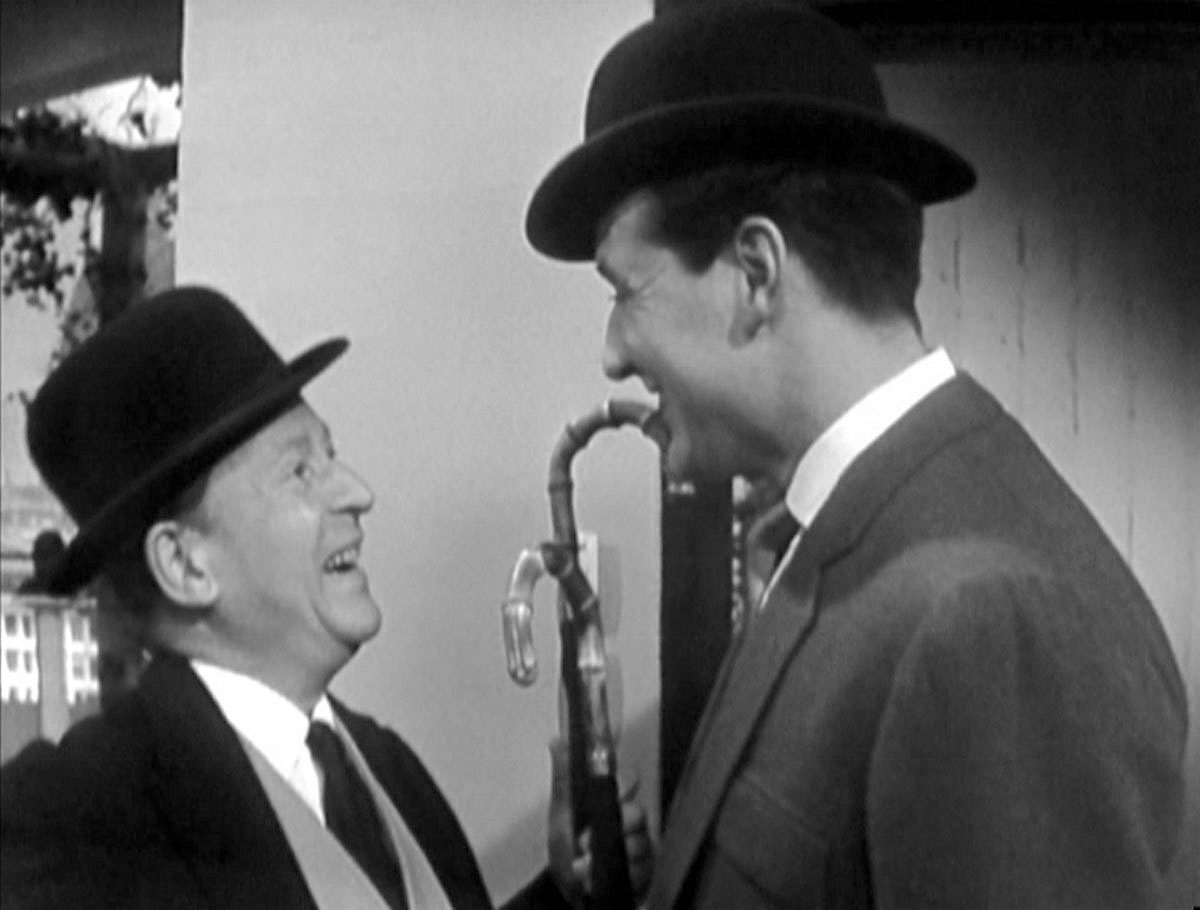 We’re now eight episodes into the second series of The Avengers and change is afoot. Even before Death of a Great Dane gets underway, something clearly sets this episode apart from the ones that came before.

John Dankworth’s theme music has been perked up a bit – that 1950s-influenced jazz-inflected drone was sitting increasingly at odds with the increasing jauntiness of the series, largely thanks to Patrick Macnee’s playing of the dashing John Steed. And Honor Blackman gets a co-starring credit in the titles, where her face is featured prominently. Ever since Ian Hendry left at the end of series one, Patrick Macnee’s face alone had appeared.

Blackman is also noticeably sleeker, more tanned, more your Bond babe (which she eventually became, as Pussy Galore) and the interaction between Steed and Gale is more noticeably sexual – he’s hitting on her, jokily, in what would probably be called an inappropriate fashion today, though Mrs Gale clearly knows how to take care of herself and fights back with “I could eat you for breakfast, sonny” looks. And the camera, too, is fond of shots that demonstrate not just a more flexible rig, but a keener interest in Blackman’s cleavage.

Plot? More McGuffin-y than we’re used to, about diamonds being found in a dead man’s stomach, the possibility of there being a turf war between rival cartels somehow being a potential spoke in the wheel as the UK starts talks to join the Common Market – “could be the difference between going in and crawling in”, we’re told, in an interchange between Steed and Gale. Which is why they’ve been dragged in, presumably.

The plot moves into vaguely contemporary territory when it’s hinted that the mastermind behind the whole diamond caper might not actually exist; we’re faintly not just in the world of avatars, but of fake news.

The character actors – always a real plus in The Avengers – are really high tone this time around, with John Laurie, as a buffer somehow involved in the diamond cartel shenanigans, delivering much more than is written in the script. But Leslie French as a butler trumps him with a performance of such sibilant superciliousness that he threatens to upstage even the mighty Macnee.

Again class looms large, and this being the 1960s the more rarefied your social standing, the more likely you are to be a shit, this tendency counter-balanced by Steed and Gale, pillars of the British noblesse oblige tradition.

As for Avengers iconography, this is the episode in which Cathy Gale dons leather, and Steed’s bowler hat maker is mentioned by name (Bates or possibly Bateson, the stiff upper lip perhaps having swallowed the last syllable).

We’re just on the borders of kinky boots territory. After a few false starts, The Avengers has found its formula.