Amy is a misery-memoir documentary about the singer Amy Winehouse, whose life ended at the age of 27 after she drank herself to death – years of bulimia had rendered her body too weak to cope with booze as well as the crack, smack and partying she’d put it through. Director Asif Kapadia proceeds in much the same way as he did with his film Senna – hide the fact that it’s a talking-head doc by laying archive footage, newspaper headlines, TV appearances, radio interviews with Amy, whatever you’ve got, over the recollections of journalists who interviewed her, musicians who worked with her, friends, parents, and so on. Kapadia doesn’t shy away from the tough stuff – we see Amy drunk on stage in Belgrade towards the end of her life being booed by a crowd who just wanted her to sing. We see her being harried by the paparazzi every time she went into or came out of a building. And Kapadia has been gifted Amy’s music, such personal stuff, and so lovelorn and despairing that it couldn’t have been more appropriate. Did Amy smile? What made her laugh? Did she enjoy spending time with family or friends? These are the sort of questions that aren’t answered, and the suggestion is always there that the “lady sings the blues” agenda overrides all other considerations in this blatantly one-sided though finely crafted chronological collage. There’s also no assessment of her talent, or of the directions she might have gone in had she lived – Amy Winehouse’s best work, relying perhaps less on musical pastiche, was surely ahead of her.

Amy – Watch it/buy it at Amazon

Like Danny Collins before it, Manglehorn is a vehicle for Al Pacino with the star’s character named in the title, and another attempt by the actor to hit the reset button and atone for too many years of booming, tic-driven, phoned-in performances. It’s a David Gordon Green film, and so it’s demure, quiet, and beautifully shot by Tim Orr – again the 1970s colour casts and wistful flare in the lens, though this time it seems appropriate, what with Pacino the man and washed-up Manglehorn the character being its focus. I’ve read some snarky reviews about this film – how Pacino is always playing to and against his baggage, in effect – but that really isn’t the case here. In fact he’s really quietly excellent and makes compelling what might not otherwise be – a simple story of a smalltown locksmith who has grown increasingly isolated over the years, but who’s offered a chance at reconnection to the human race thanks to the interest of a bank teller he visits with his takings once a week. Holly Hunter – where’s she been? – is the teller, and makes this a touching two-hander where both players are in exactly the same key. A sweet fugue about, and perhaps for, the lonely.

Manglehorn – Watch it/buy it at Amazon

Get Santa (Warner, cert U)

Some films work in spite of themselves. Get Santa is just such a film, a simple story about Saint Nick (Jim Broadbent) getting lost on Christmas Eve, and the efforts of a newly released jailbird (Rafe Spall) and his estranged son (Kit Connor) to “save Christmas” by connecting (mythical) man and machine back up. As deliberately and defiantly British as the Shakin’ Stevens Christmas song on the soundtrack, though clearly Hollywood inspired, it’s brilliantly cast – Joanna Scanlan as Spall’s severe parole officer, Warwick Davis as a diminutive jailbird who’s inevitably going to be the butt of the “elf” joke. Or should that be the Elf joke? Ewen Bremner is a cock-eyed cop, Stephen Graham the decent lag who ends up helping Santa. Christopher Smith directs, and he’s miles away from his usual horror turf (Creep, Black Death and Triangle), and perhaps that’s the reason for the slightly breathless, scrappy pantomime quality to the whole thing. The musical score bangs and huffs away as if someone had got hold of a John Williams Soundtrack app and the CG is absolutely average. However, the big things all work, its heart is in the right place, Broadbent is a lovely Santa and when it commands you to thrill, or laugh, or well up, you probably will.

Get Santa – Watch it/buy it at Amazon

Here’s the story of the fun, flamboyant, optimistic and socially mobile 1960s rendered in a documentary about two guys – one posh, one an oik – who took a band called the High Numbers and made them into The Who. Kit Lambert and Chris Stamp, the former privately educated, Oxford and the Army, happy to be interviewed in German or French, the latter brimming with East End vigour (and, incidentally, the brother of Terence Stamp, who turns up a couple of times to add a bit of glam), these guys wanted to be directors, and so, in Situationist 1960s fashion, went out and found a band so they could make their own A Hard Day’s Night with a London accent. Luckily, and entirely accidentally, one of the band of relatively ugly geezers they found could write songs. The rest is history. Luckily for director James D Cooper, there are a lot of people in his film who can talk – Pete Townshend admits freely that he was incredibly nervous about Lambert and Stamp’s method of creating a feedback loop whereby, in the early days of the band’s residency at the Marquee club in Soho the band would shift in attack and look depending on their punters’ expectations. The audience, he reflects, “was my patron”. Roger Daltrey is also frank about tensions caused by the grooming of Townshend by the managerial duo, in particular Lambert, who took it upon himself to broaden Townshend’s musical horizons. Lambert is now dead, and the film really misses his look back in languor at the events of five decades ago. But Stamp is good value. As is Townshend’s old dope-smoking college buddy Richard Barnes. For anyone seeking to emulate the skin-of-their-teeth approach of Lambert and Stamp, the key lesson to take away is – have an address in Money London. That way extended lines of credit can be yours. And it helps to have a famous actor knocking about in the background, for regular cash injections. And someone, somewhere, who can write songs. Ultimately, though this is fascinating, informative and enjoyable, it’s more about The Who than their managers. A bit of mis-selling Lambert and Stamp in their heyday would doubtless have approved of.

Lambert and Stamp – Watch it/buy it at Amazon

Steve Jobs: The Man in the Machine (Universal, cert 12)

With documentaries on Fela Kuti, Hunter S Thompson, Lance Armstrong and James Brown behind him, Alex Gibney is looking like the go-to guy when it comes to awkward customers. The Apple co-founder is his latest, and he approaches it with a simple question – why did so many people mourn his death in 2011? Gibney never quite gets his answer, though he covers a lot of ground examining this odd man from cradle to grave, a charming asshole, if the evidence is to be believed. Jobs’s key realisation, something that no other maker of tech gear understood, is that the relationship between human and computer in the future was going to be intimate – and he spent his entire life designing and marketing bits and pieces that reflected this simple but ultimately devastatingly differentiating idea. It was phones and music, after all, that brought Apple back from the dead, the rounded corners and pretty colours, plus that lower case “i” in front of everything. For “intimate” – it seems so obvious now. In personal relationships, we hear that Jobs was in one of three states with people – ignoring, charming or vilifying them, whether it was people who worked for him, or those close to him. He “blew it” is the verdict of Chrisann Brennan, mother of the daughter he initially refused to acknowledge. And there’s a telling anecdote from Steve Wozniak – Apple co-founder and old friend – who relates that Jobs gave him $350, his 50/50 cut of cash they had earned for programming down at Hewlett Packard when they were kids. In fact Jobs had been paid $7,000, but didn’t tell Woz. Possibly, that’s all you need to know: the guy was a liar and a cheat. And the fact that this mountebank became a 21st-century guru perhaps says more about us than Apple, the “counterculture company” mistreating its workers in China, pulling most of its domestic philanthropic programs once it got big, barely paying any taxes, working to stymie the careers of key personnel and manipulating stock options for massive personal gain. Scratch a hippie, find a fascist, as someone once said. And in Jobs, Buddhist chanting or no, that seems to be just what Gibney has found.

Steve Jobs: The Man in the Machine – Watch it/buy it at Amazon

Robert Sheehan can be a global star if he wants to be. Pausing, perhaps, on the road, he stars in this dour psycho-thriller about a guy who sees dead people and, as we pick up the story, is in fact being followed around by the ghost of a recently dead investigative reporter looking to get help comforting his grieving widow. Sheehan runs through various interpretations of the word “harrowed” in a performance that tries to hold together a plot that’s simply moving too slow. Perhaps that’s because writer Andrew Kirk is writing to a pace he’s learnt from scripting the soap Emmerdale. David Blair, director of The Lakes on TV, keeps things visually murky, mirroring a plot that plays peekaboo with Sheehan’s mental state. Is he schizophrenic? Or perhaps traumatised after finding his dad dead in the garden shed when he was a kid? Or is he genuinely psychic? It’s not The Sixth Sense, but towards the end things do start to move in a genuinely interesting direction, as Blair and Kirk swap one explanation out for another in a quick shuffle of possibilities. Watch if for Sheehan, if nothing else.

The Messenger – Watch it/buy it at Amazon 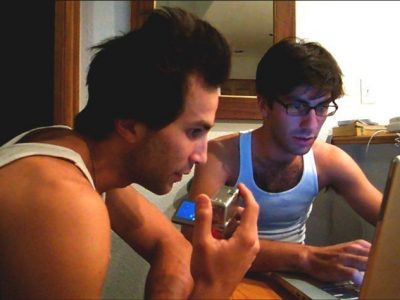 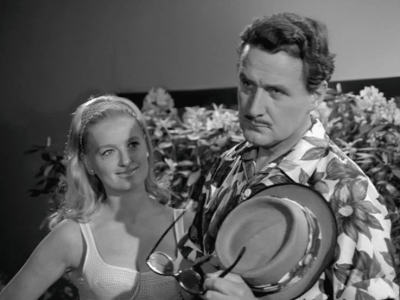 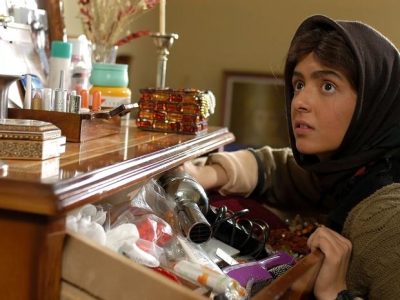