There’s a scene early on in Xan (daughter of John) Cassavetes’s vampire film in which a man (Milo Ventimiglia) with the hots for a woman he’s just met (Joséphine de la Baume) is pawing at her passionately through the centimetres-wide gap in her intruder-chained door. What Paolo doesn’t yet know is that Djuna is a vampire who’s struggling with her vow to stay off human blood, which is why she’s reluctant to unchain the door and let him in. Cassavetes shoots the encounter from above – their arms snaking through the gap, his head thrusting forward, their mouths meeting in erotic hunger – an unusual point of view that makes the entire scene animalistic and sexy. What a relief. For all the leather-on-Beckinsale-butt of Underworld, all the Lautner-abdominals of Twilight, recent vampire-werewolf-whathaveyou films have all been a bit chaste. Yes, even Byzantium, and that featured Gemma Arterton, who could recharge dead car batteries with a glance. Refreshingly, Kiss of the Damned journeys even further into Sexytown with the introduction of a sister (Roxane Mesquida) to Djuna who is far more uninhibited when it comes to blood (and nudity) in a film that has been balls deep in 1970s Euro vampire homage from the opening twang of its soundtrack, its first disorienting quick-pan. Mario Bava, Jess Franco and Jean Rollin are the obvious reference points, but so is the lush bourgeois corruption of a Bertolucci, the kinetic camera of a de Palma. The clothes are by Chanel (well, sometimes), Maria Callas is always warming up in the wings when the experimental-boing-and-Morricone-strings brigade aren’t dominating the soundtrack and Anna Mouglalis plays senior vampire of this very femme, very fatale world with devastating hauteur and a guttural “daaahlink” accent. Cassavetes and crew even get the furniture right. Fantastic.

Kiss of the Damned – at Amazon

Incendies was a sensational film that turned the situation in the Middle East into a thriller, without cheapening anybody. Trying something like the same manoeuvre in reverse for an encore, director Denis Villeneuve takes a sensational situation and plays it for its nuances. Hugh Jackman plays the father of a kidnapped girl, Jake Gyllenhaal is the cop on the case, Paul Dano is the local oddball who is suspected of the crime – though the police can’t lay a finger on him. At this point, having laid out what is clearly a very familiar stall, things take off, with Villeneuve and writer Aaron Guzikowski taking these genre staples and confounding our expectations at almost every turn. So what are you expecting? A vigilante dad taking the law into his own hands? A cop with a messed-up past? A villain who’s too obvious to actually be a villain? The answers, in no particular order, are yes, no and gotcha. Like Incendies this is a long film (153mins), but it is extremely fleet of foot. If there’s a quibble, it’s that unlike Incendies it does not save its best move till the end, preferring a standard genre finish (the loquacious villain), though the acting by the leads is so sensational that no one is really going to bother about a flaky last five minutes. As for the support (Terrence Howard, Melissa Leo, Viola Davis and Maria Bello) that’s none too shabby either.

I was just writing the words “Groundhog Day” in my notes while watching this rom-com when writer/director Richard Curtis headed me off at the pass with a line spoken by Bill Nighy to screen son Domhnall Gleeson – dad has just told son that all the men in the family can go back in time – “Big lesson number one,” Nighy says, “all the time travel in the world can’t make someone love you.” By the end of the film, during which Gleeson has gone back in time repeatedly to gain access to the fair heart of Rachel McAdams, I’m still convinced that Curtis suddenly realised he was rewriting Groundhog Day and then tried to veer off in another direction. But the degree to which About Time isn’t Groundhog Day is exactly the degree to which it isn’t as good. Which is to say “quite a lot”. This is probably the point where it makes sense to say that I’m a Curtis fan. But I couldn’t settle with this film. About Time is a clear case of two love stories trying to operate in a space that’s only big enough for one. Its marquee one is between McAdams and Gleeson, but thanks to bad screen chemistry this never gains traction. Which throws the focus on the father/son love story between Nighy and Gleeson, which is touching but doesn’t get enough screen time. Mr Curtis, you’ve got enough money, why not just write a brilliant film for Bill Nighy and be done with it? Other standard gripes against Curtis – the smug boho-bourgeois lifestyle on display, the presence of an unnecessary female ditz (going all the way back to Charlotte Coleman in Four Weddings), his directorial tendency to enter scenes too early and leave too late, the unnecessary shots – these I can live with. But I really really don’t need to see another best man speech.

About Time – at Amazon

Nice Mark Ruffalo plays a recovering sex addict, sharing Sexaholics Anonymous sessions with fellow devotees-of-the-groin Tim Robbins, Pink and Josh Gad, in this reteam for The Kids Are Alright writer Stuart Blumberg and Ruffalo. So how funny do you think sex addiction is? Blumberg et al aren’t entirely sure and so play at least one third of the film for laughs, the bit focusing on the Jonah Hill-like Gad, as a doctor whose penchant for upskirt shots and relentless masturbation is about to ruin his life in much the same way it has for the rest of the group. Ruffalo plays the guy who’s seen the dark side and is now on the way back to the light, his reward being a relationship with squeaky bunny Gwyneth Paltrow. Which leads to the next question – how does a recovering sex addict manage a sexual relationship with a regular partner? The film isn’t quite sure about this either. Attempting the sort of ensemble drama the French are so good at, and getting at least three-quarters of the way there, Blumberg’s film loses focus the further it gets away from Ruffalo and Gad. And that’s tough on Robbins and Pink, who are both interesting and exciting enough to warrant a film of their own. Each. Or maybe Blumberg went and saw Steve McQueen’s Shame, a film about sex addiction that goes to the dark side, and just kind of… you know… gave… up.

Thanks for Sharing – at Amazon

Halfway through Wadjda I felt like shouting – OK, I get it, it’s not much fun being a woman in an Islamic country. I say halfway but it’s absolutely and abundantly clear that that’s what the message of this Saudi Arabian drama is going to be from the minute we’re introduced to the feisty, bright young Wadjda (Waad Mohammed) who yearns to own a bicycle – girls who value their honour don’t ride bikes! – and is shooed away from chatting with a local boy, a fellow 10-year-old (I’m guessing), by the clearly sex-obsessed Islamic police. What follows in this beautifully acted and made drama is a depressing series of scenes – Wadjda being slapped down in school, her mother being sideline by a husband who wants another wife, the whole thing building towards a well signposted climax we’re clearly all meant to get behind. As an affirmative statement about the role of women in Arab countries, Wadjda is excellent, but as drama it’s propaganda, simple as.

An old-school Romeo & Juliet, with Shakespeare’s original play streamlined by Downton Abbey’s Julian Fellowes, shot in Verona, among other gorgeous Italian spots. And if it’s got anything that, say, the Baz Luhrmann 1996 version (starring Leo DiCaprio and Claire Danes) doesn’t have it’s the locations. As for the rest of it – it’s a strangely off affair. The story of young love, warring clans and the tragic outcome of the mixing of the two is tellingly at its best when it shifts focus away from the titular lovers and onto the fighters – Ed Westwick’s scowling Tybalt in particular, though Christian Cooke’s Mercutio runs him close. Even further away from the main action we have Damian Lewis as Lord Capulet, Lesley Manville as Nurse and Paul Giamatti as Friar Laurence, all of whom threaten to steal the film at any moment from the two leads. Douglas Booth is an improbably handsome Romeo – half pre-raphaelite muse, half Nureyev – but if he has fire in his head or loins it’s hard to see it here. As for Hailee Steinfeld, so brilliant in True Grit as young protagonist Mattie Ross, she’s simply not been rehearsed enough by director Carlo Carlei, and her line readings are lost in mumbling or are perfectly audible but obviously make no sense to her. When Juliet says “Wherefore art thou Romeo?” she means “Why do you have to be a Montague?”, because “wherefore” means “why. And if you can’t get that right, there’s no real hope for the rest of it.

I haven’t actually tried Mr Skin for the brief nipple shot of Clara Bow that you get in Wings, the very first winner of the Best Picture Oscar (its equivalent, at any rate) back in 1927. Bow was one of the most famous actresses in the world at the time, and is by one hell of a long way the best thing in this film that is actually about two guys – a swell and an average Joe – who join up to fight in the First World War, train to become pilots, and then indulge in all manner of aeronautical combat before heading for the tearjerking finale. A silent movie that’s been beautifully restored – considering it was thought lost at one point – it’s the easiest film in the world to follow whether you’re able to read the intertitles or not, thanks to the simple fact that Hollywood has barely deviated from the formula ever since. Pearl Harbor is pretty much the same movie. An observation I need to follow with another one – this film’s director, William Wellman, could eat Pearl Harbor’s Michael Bay for breakfast. No, the aerial dogfights aren’t going to make you sit forward in your seat as if you were watching Gravity – that stuff just doesn’t work any more, even with the Handshiegl-process orange flames added back in by computer trickery. Nor are you going to really root for either of the guys, who are closer to 2D than seems strictly necessary (as for the “starring Gary Cooper” credit on the cover, he’s in it for two minutes max). But Wellman’s flying, fluid camera is remarkable even now. As is Bow’s freshness, even after all these decades. 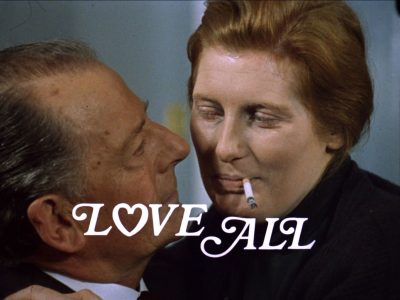 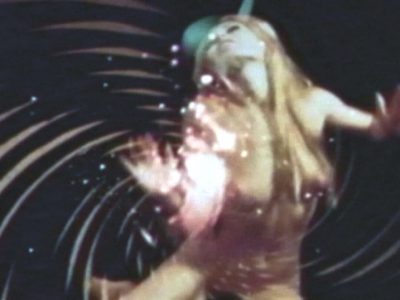