On this day in 2001, having been elected in a free and fair vote, the last Tsar of Bulgaria, Tsar Simeon II, aka Simeon Borisov Saxe-Coburg-Gotha, became prime minister of Bulgaria.

The monarchy had been abolished by the Communists in 1946 and the nine-year-old Tsar – the word derives from Caesar (more obviously if spelt Csar) as does the German Kaiser – had gone into exile, first in Egypt, then in Madrid. After the fall of the Iron Curtain, he applied for and was issued with a new Bulgarian passport. In 1996 he returned to his country, where he was feted by crowds hoping for a restoration of the monarchy.

Simeon responded by forming a political party, pointedly avoided the use of the title Tsar, and went on to win the elections in 2001 with 42.74% of the vote, on a platform of reform and the rule of law. Simeon’s was a largely technocratic administration and he moved to ally his country with the west – it joined Nato, applied for membership of the EU. In the 2005 elections his party scored 21.83% of the popular vote. In the elections of 2009 just 3.0%. After which Simeon resigned as the leader of his party.

You might not have seen the tiny British film Skeletons, but if you’ve seen Insidious, you’ve seen a film that’s seen Skeletons. The characters of Specs and Turner, the two odd ghostbusters? They are directly… influenced, let’s say… by Nick Whitfield’s great film, so full of tiny sparks of originality that it’s no wonder other film-makers said “I want a bit of that.”

Here, the original Specs and Turner are called Simon (Will Adamsdale) and Bennett (Andrew Buckley) and they’re a pair of characters who might have been scripted by a downbeat British Tarantino – Mr Fat and Mr Small – a dry, loquacious Laurel and Hardy who discuss everything under the sun except the exact nature of what they’re doing here and now.

We join these two on yet another job, at the house of a woman (Paprika Steen) whose pretty young daughter (Tuppence Middleton) has become mute. Simon and Bennett creak into action, first going through a long and baffling questionnaire – with questions such as “Have you ever assisted in an amputation?” – before getting down to work proper, finding skeletons literally in the cupboard and extracting secrets from hidden places.

Whitfield’s master stroke is to put all these characters, who seem fairly modern, into a setting that looks like the England of memory – as if the world of Brief Encounter had snapped back into life. The effect is to produce a forward-leaning “what the hell is going on” viewing experience.

We work out the answer gradually: these two guys appear to be representatives of some sort of agency who travel about fixing disturbances in the psychic fabric of the world, sending things back to where they should be. This they do with little magic tokens. A scrap of paper with a photo on it. A few stones. A pen. With a film, Whitfield has worked out already, it’s the audience who supply the fantasy, the director just has to give us the invitation to imagine. He does, and we do.

Jason Isaacs turns up for a few minutes in a cameo – he loved the film so much he became an unofficial booster – in a flat cap and tweed suit as some kind of management figure come to give his lads a bluff pep talk. But otherwise it’s a sea of largely unknown faces (though the excellent Steen is well known in her native Denmark), doing mysterious things in a downbeat way.

Its universe is complete and its logic works. So when either Bennett or Simon (sorry, can’t remember which) talks about one of the duo “going Bulgarian” we understand that this is not a good thing, and a quick blast of the eerie harmonies of the Bulgarian vocal troupe the Trio Bulgarka on the soundtrack nudge us, in case we’re a bit slow.

Variety didn’t like the film – “Skeletons fails to rattle any cupboards” they said – but in this case Variety are wrong. As an example of the British surreal – Harold Pinter meets the 1960s TV series The Avengers – Skeletons is pretty much unbeatable. And it’s got some good jokes. And at one point someone in the special effects department has even sprung for a smoke bomb. Fantastic.

Skeletons – Watch it now at Amazon 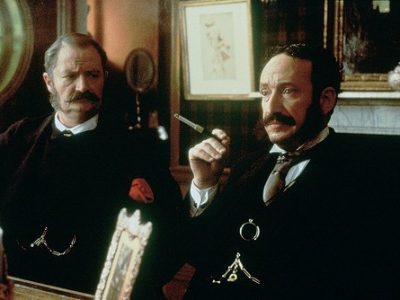 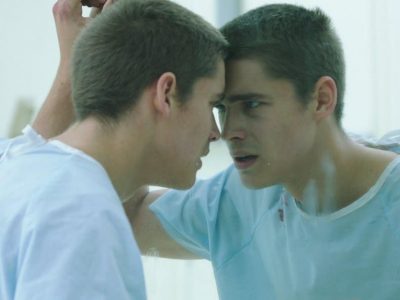 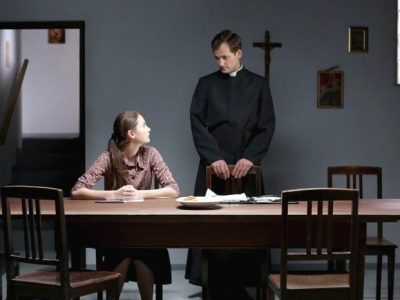 Stations of the Cross aka Kreuzweg