On this day in the 1822, a 20-year-old Canadian called Alexis Bidagan St Martin was shot in the stomach at close range at a fur trading post on Mackinac Island, Canada. He survived the musket blast and the wound healed, leaving a hole, a fistula, in his side which led right into his stomach. The man treating him, US army sergeant William Beaumont, noticed that all the food that St Martin ate was re-appearing from the fistula. Matters improved, St Martin’s digestion returned to normal though the wound healed to form a perfect conduit from the stomach to the outside world – the hole in the stomach had attached itself to the edge of the hole in the skin. Beaumont realised he had a window onto digestion itself, very poorly understood at the time, and set about a series of experiments which essentially entailed attaching bits of food to a string and dropping them in through the fistula into St Martin’s stomach. St Martin was a poor man and Beaumont had employed him as his servant, one of his duties being to put up with these experiments. They went on for the next 11 years. Beaumont published his findings, Experiments and Observations on the Gastric Juice, and the Physiology of Digestion, which was a groundbreaking work on the digestive system. Once out of Beaumont’s employ, St Martin moved to Quebec and refused to take part in any more experiments, though Beaumont frequently suggested it. Beaumont died in 1853; St Martin lived to be 78, dying in 1880.

Is Alien the most important sci-fi film of the 1970s? No, that’s Star Wars, obviously. But, like Star Wars, Alien is trying to break free of the shiny new world of sci-fi that had been dominant until then, in which clean-limbed astronauts in pristine space gear had adventures in aseptic spaces, while computers whirred diligently in the background, doing the hard work. Star Wars did it by returning sci-fi to the world of 1930s serials – Flash Gordon being a prime reference – while Alien did it by going even further back, to the gothic haunted house horror. The modern iteration of the gothic haunted house horror is the “kids in the woods” movie. And what we’re watching in Alien is an absolutely standard crew of isolated individuals – jockish guys (one of them speccy and scientific) and a couple of girls (one of them feisty and hot) being slaughtered one after the other. The sort of thing you can see in a thousand permutation on The Texas Chain Saw Massacre (from 1974).

Except Alien really is a film that’s more than the sum of its parts. Dan O’Bannon wrote the original story with Ronald Shusett, but the uncredited work of Walter Hill and David Giler is also significant, adding extra grunt where required – we’re in the world of “hard sci-fi”. The work of the artist HR Giger is key, his organic, knobbly, dirty designs for the alien inspiring the grungy ethos of the film. As for the actors, most of them could be swapped about – it doesn’t have to be John Hurt whose stomach is the incubator for the first alien we see, nor does it really have to be Yaphet Kotto, Veronica Cartwright or even Tom Skerrit doing what they do. They’re there, and so is much of their dialogue, to add a blue-collar atmosphere to a genre that, until then, tried to maintain that class disappeared on lift-off. But Ian Holm, as the methodical, company-droid no one knows is even a droid, his way with cool superciliousness makes him key. And so is Sigourney Weaver, who laid down the template for tough action heroines who also look good in their underwear. As for Ridley Scott’s direction, it’s a masterclass, first in character set-up, then in mood manipulation and shock management (the cat), and finally in misdirection – if we realise early on we’re watching a horror movie then of course it’s going to be Weaver who’s the “final girl” and of course she’s going to end up in a white T shirt, uniform of all “final girls”. But we don’t realise that.

In a world before DVD or even widespread VHS, Scott understands that his audience is in a big dark room together and that the only impression that matters is the one they leave with. So he’s got the licence to take it slow – no death-before-the-opening-credits stuff here. Alien is horror pastiche polished till it shines, then hidden beneath a sci-fi overcoat, then dirtied up. Along with other 1970s sci-fi films such as Dark Star and Silent Running, it marked the arrival of a new era in scuffed sci-fi. And let’s not forget that this crew of innocents – some much more innocent than others – are on a ship called the Nostromo, named after Joseph Conrad’s book. Another of Conrad’s books, Heart of Darkness, about another ship with a variously innocent crew, was being turned by Francis Ford Coppola into Apocalypse Now just as Scott was doing his thing with Nostromo. What would Conrad have thought about that? 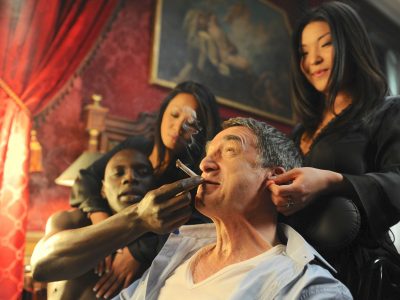 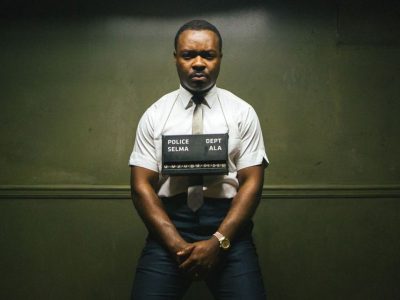