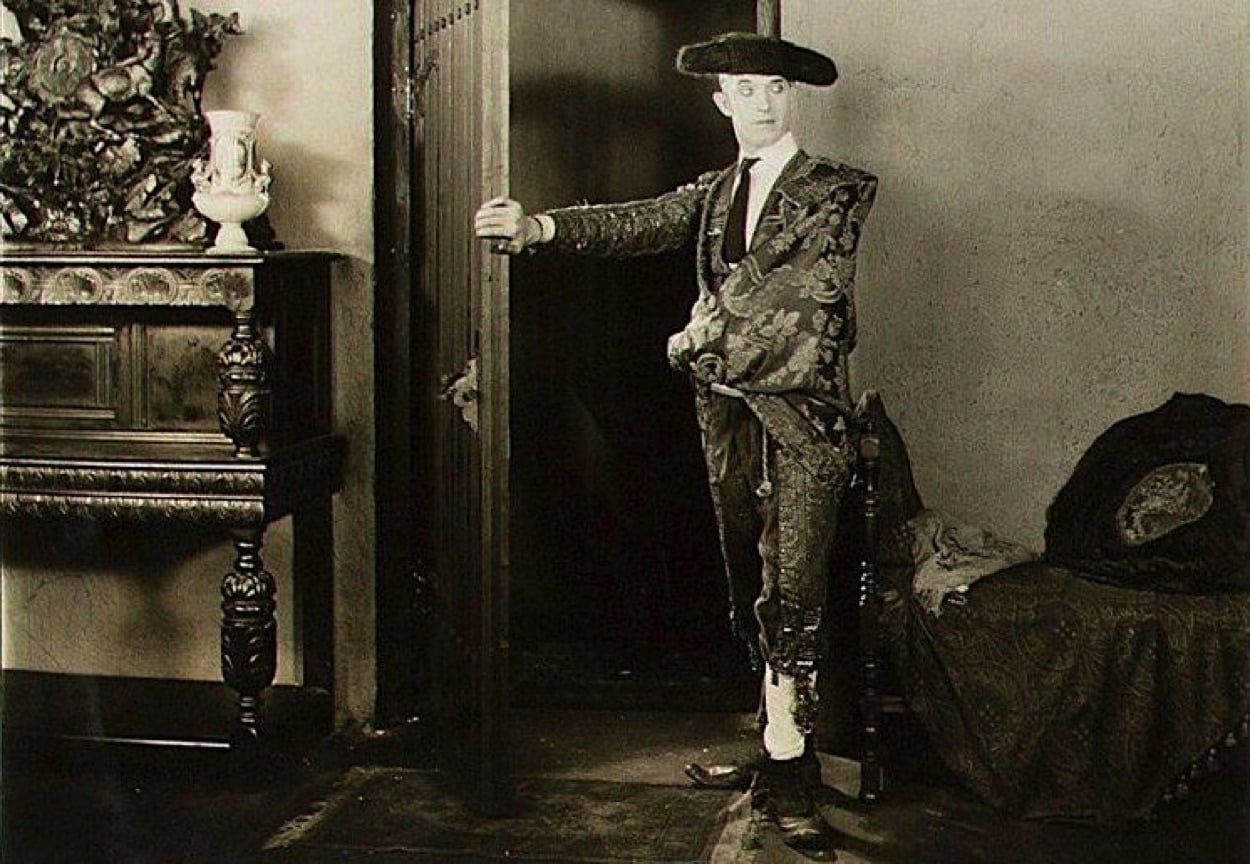 Before Laurel and Hardy there was Laurel and Laurel, and in 1922’s Mud and Sand we get to see Stan Laurel’s original silent-movie partnership at work.

The film is a longish short (40 mins) spoofing the Rudolph Valentino hit Blood and Sand, the story of a poor Spanish toreador who hits the big time and has his head turned by the wiles of a vampish older widow. Tragedy ensues.

Turned out within three months of Valentino’s all-action spectacular – one of the biggest films of the year – Mud and Sand’s target is obvious, with Stan Laurel playing the slick-haired accidental toreador hero and irresistible love icon Rhubarb Vaselino.

(The on-screen intertitles call him Vaseline, but they were probably re-added later. All the publicity material of the time refers to Laurel’s character as Vaselino, which is closer to Valentino… and funnier.)

Other parts are played by Stan’s wife (more on her shortly) Mae Laurel, as a libidinous gypsy dancer. Julie Leonard is the sweet screen wife Rhubarb forsakes – Carmen in the original film, Caramel here. Leona Anderson is the older woman, Doña Sol in the original becoming Filet de Sole here.

Talking of names, Stan Laurel’s wasn’t originally Laurel, it was Jefferson. After arriving in the US on the same ship as Charlie Chaplin, he had hacked around in the undergrowth of the entertainment business looking for a way to cut through. On graduating from membership of Fred Karno’s comic troupe – like Chaplin – he formed a number of music-hall acts with other entertainers before meeting Mae Dahlberg in 1917, who suggested they form a double act. She also, so she claimed, suggested the name change to Laurel, on account of Stan Jefferson comprising 13 unlucky letters.

Though they never married, they generally referred to themselves as husband and wife. Not unknown among show people at the time.

They worked together often in the theatres but once Stan started picking up screen work, “Mrs” Laurel started to become a liability. By 1924 Stan’s contract was explicitly stipulating that the wife wasn’t allowed to appear in any of the 12 two-reelers he was making with producer Joe Rock. Stan was on the rise and Mae was in the way. Eventually Rock paid Mae off and just to be on the safe side also bought her a one-way ticket to Australia, whence she came.

When Mud and Sand is made, that all lies in the future. Here, Stan and Mae are in the first flush of their (limited) screen success together. They get precisely one shared scene. In the original film this is a remarkable dance sequence between Rudolph Valentino and an uncredited flamenco dancer, whom he flings contemptuously to the ground when the dance is done. Mr and Mrs L play it for laughs, he fooling about with Chaplinesque dance moves relying on speed, reflexes and a lithe athleticism while she just hoofs about. She’s more your older Gloria Swanson than the slip of a girl she’s meant to be playing.

If you’re familiar with the original film, most of the scenes in this spoof will ring a bell. Mud and Sand expects that its audience will have seen Blood and Sand at least once, if not several times.

So we get the early scene where Vaselino’s mother chases him around the kitchen with a broom, the one where he serenades his sweetheart Caramel from beneath her balcony. The big cafe scene (enter vamp Filet de Sole, and Mrs L as the wildly exotic dancer/galumph). And the key scene from the original movie, when the toreador hero visits the vamp in her boudoir and she seduces him. Enter hero, exit heel.

Fans of Laurel and Hardy need not worry, Rhubarb Vaselino is the dim, meek and easily led character of familiar memory and Laurel holds the entire film together with his displays of acrobatic agility and perfect comic timing. There are a number of good laughs in this film, which is more than you can say about a lot of films of this vintage. That’s actually really saying something because the picture visible on the screen is a long way from good – it’s woolly and damaged. The original elements must have all disappeared otherwise, surely, someone would have restored this charmer. They did it with Blood and Sand after all.


Mud and Sand – Watch it/buy it at Amazon