See This: Le Procès aka The Trial

An arch bullshitter of the first water, Orson Welles fell on Franz Kafka’s The Trial like he fell on everything – mountainously. Kafka’s is a simple story – about Joseph K, a man arrested for an unspecified crime, who is taken through a legal process, all the way protesting he’s innocent. Is he? We can never tell, since the narrator is K himself and it’s impossible to work out if he’s lying or not, though he does increasingly come across as a shifty piece of work. Not unlike the artful Mr Welles, who protested to the end of his days that Hollywood had found him guilty of an unspecified crime and had banished him to indie obscurity. As K, Welles cast Anthony Perkins, the Psycho star and evasiveness personified, and amusingly cast himself as the Judge. Behind the camera Welles orchestrates an oppressive tangle of crazy camera angles, expressionistic sets and bravura black and white photography and while he probably knew he could never transpose the book’s subjective point of view to the screen, he has a damn good try. As Welles himself said in 1962, “Say what you like, but The Trial is the best film I have ever made”. And, since he said it himself, it’s got to be the truth.

The Trial – Watch it/buy it at Amazon 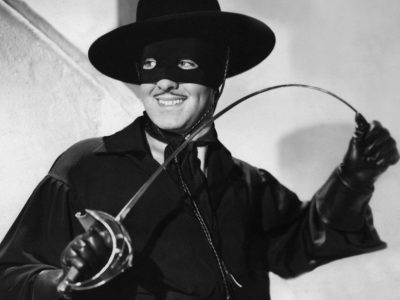 Zorro: Who Is That Masked Man?