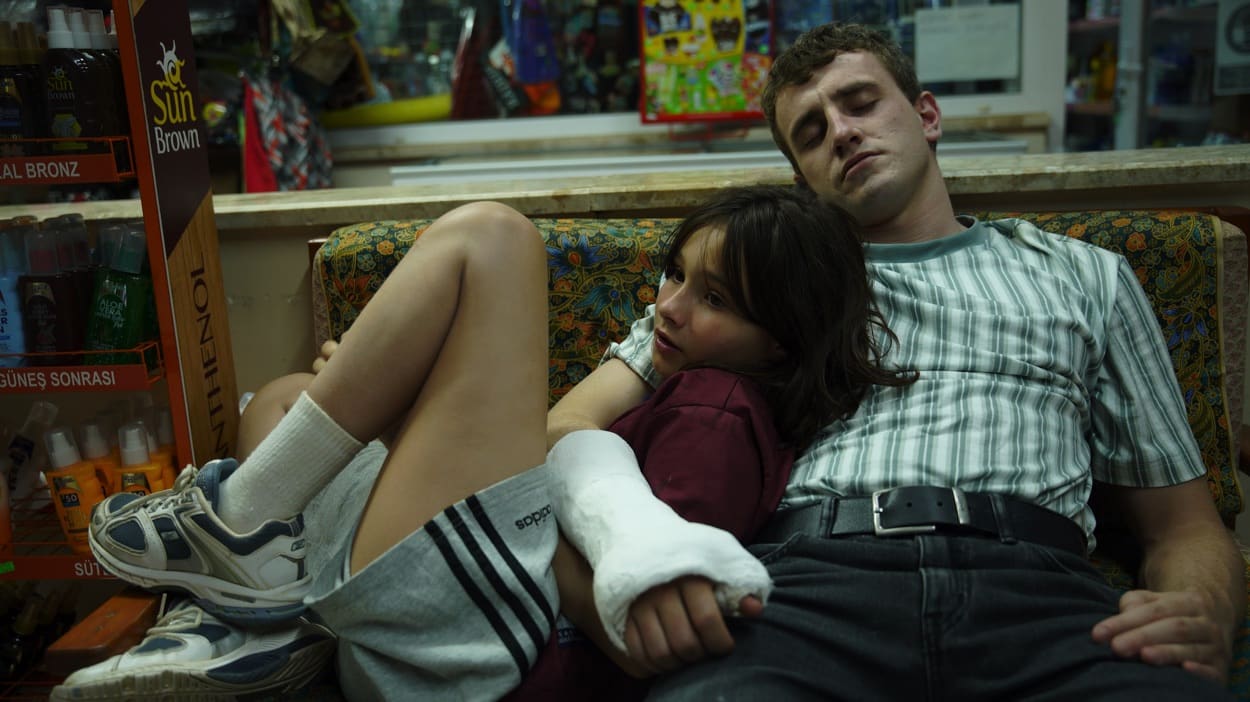 Thanks to Normal People, the BBC adaptation of Sally Rooney’s best-seller, for a while Paul Mescal was one of the most famous actors in the UK, and further afield. The world, as the Brits like to say, was his lobster.

So it’s nice to see him lending his name to Aftersun, a debut movie by an unknown director, and one who’s taking risks with storytelling technique. It turns out to be a smart choice, since Charlotte Wells’s film is astonishingly well conceived and astonishingly well made.

A bare-bones description: a dad and his daughter are on holiday in Turkey. Wells’s camera appears to be logging scenes from their time together as if showing us holiday snaps they’d come back with, along with shaky footage on the new digital camera dad has bought to capture these moments.

This series of snapshots is chronological, from their nighttime arrival and finding the wrong room has been booked to departure at the airport a week or so later, and filled with familiar holiday moments – at the pool, on the water slide, the hotel buffet, a sauna, just lying on a sunlounger, meals in the evening with entertainment provided by the hotel, buying a Turkish carpet and so on.

Dad is Paul Mescal, of course, and he delivers a forcefully bivalent performance that’s all dad-ly on the surface – mansplain-y, bad jokes, dad dancing, “you can talk to me about anything, you know” reassurance – while beneath there is something about Calum that’s never quite explained. He’s pissed off that his relationship with daughter Sophie’s mother has gone wrong but there’s more going on here than that – he’s depressed, maybe. Or suicidal, possibly?

Mescal is selflessly good but the star of this film is the remarkably fresh and loosely natural Frankie Corio as Sophie, through whose eyes everything is seen and on whom Wells’s camera is focused, in woozy holiday shakycam quite often, the entire time.

This is Sophie’s last summer of innocence. Boys and booze, sex and self-consciousness lie right around the corner, hinted at in her interactions with older girls and boys at the hotel, and brought into relief by her interactions with her dad, who seems all too alive to the fact that this is the end of something – his 11-year-old cheeky monkey is now a tween, soon to be a teen.

Aware that people read blurbs, capsule summaries, reviews (like this), Wells folds that awareness into her storytelling. “Sophie reflects…” are the words that open the IMDb logline, and though it’s not made explicit till around 20 minutes from the end, the entire film is actually a grown woman’s hazy, impressionistic recollection of her holiday with dad 20 years earlier. Has something happened to dad in the interim? Did something happen to him on the holiday? Wells keeps that suggestion of a threat constantly in play so that every tiny moment of jeopardy becomes amplified into an “is this when he dies?” question.

Barry Jenkins is one of the producers, which is appropriate, because in films like Moonlight he also uses childhood as a launching point for a complex story of relationships echoing down the decades.

There’s a funereal aspect to Aftersun. In the same way that holiday hits by the likes of Blur, Chumbawamba, REM and Queen transport us back to that time but also confirm how dead and gone it is, Wells tries to capture that moment when a girl loses her dad and a dad loses his girl, their last summer together before the nature of their relationship alters for ever. Neither fully comprehends it but both know something is afoot.

How brilliantly and tenderly Wells captures that suspicion. And how apt the title, which comes up starkly, white on black, before the final credits roll, another way of saying The End.

Aftersun – Watch it/buy it at Amazon