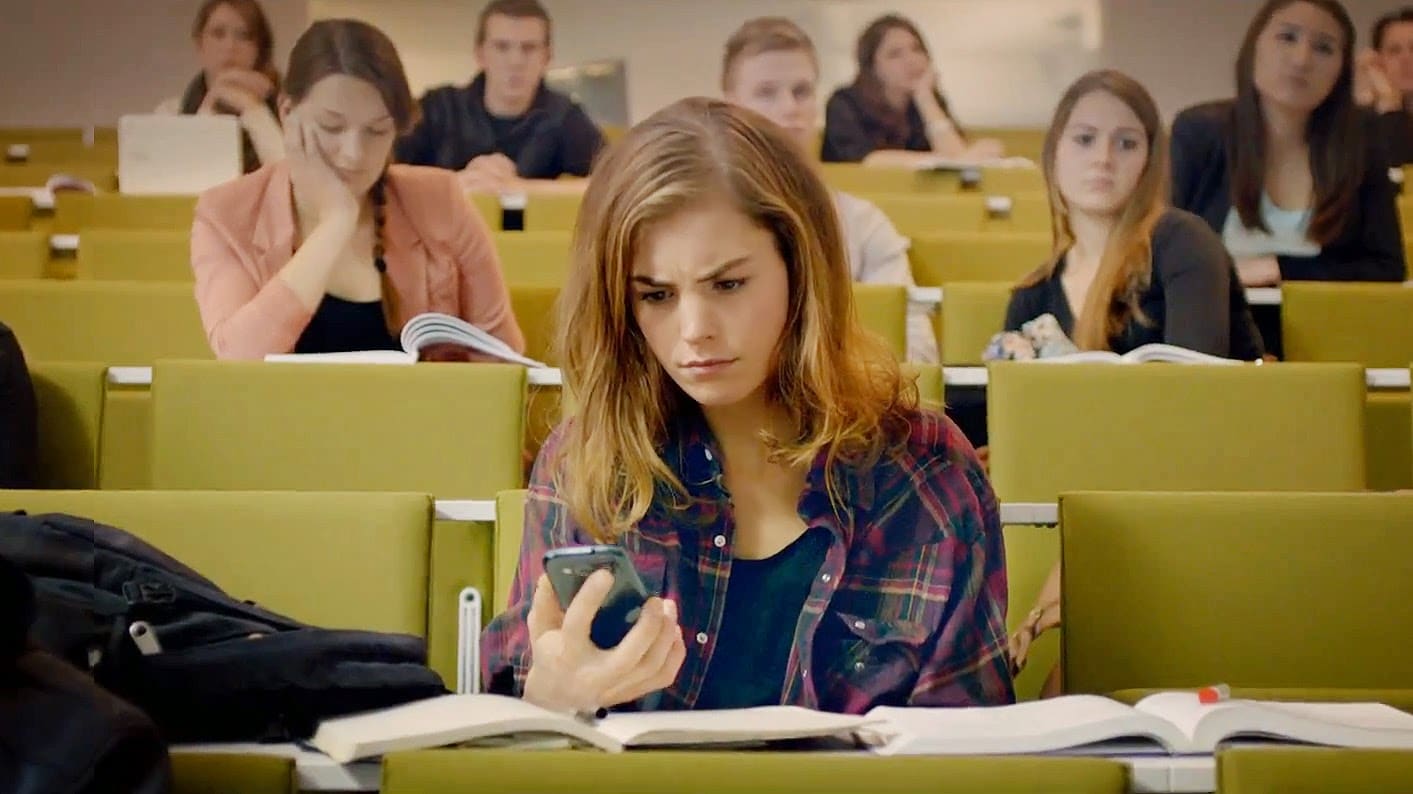 App is a film about an app and it originally came with an app. Wha? It’s the first movie to use “second screen technology’ to deliver extra content via smartphone while the main feature plays out on the big screen. “Start the app now” a message (in Dutch) flashes up on the screen as the movie gets underway.

App came out in 2013. I watched it in 2022. The accompanying app is no longer available, and even if it were, it probably wouldn’t work on the new operating systems now in use. Nothing dates quite so fast as tech.

Movies, on the other hand, have more of a shelf life, and the good news about App is that you don’t need the app to enjoy this film, appropriately, about tech taking over our lives.

Hannah Hoekstra – a mix of girlish good looks and womanly can-do – plays Anna, a university student of bounce, charm and sass whose smartphone one day starts talking to her, telling her things like the date of birth of Sigmund Freud, before going on to insert itself into her life in a more sinister way, like streaming shots of her naked into the metaverse (as no one called it in 2013), breaking up friendships and interfering with the treatment of her brother, semi-paralysed in hospital, by hijacking the systems he’s hooked up to.

Director Bobby Boermans builds a convincing picture of student life – chugging booze, smoking weed, hanging out, sitting through lectures half dazed – before starting on the escalation of the bad stuff. Initially just unwanted phone calls, things progress, and we more or less know where they’re going because in a brief pre-credits sequence Boermans has shown us a pretty blonde not unlike Anna deliberately walking in front of a speeding express train. Whammo.

It’s interesting that the app is called Iris, which is Siri backwards. It’s also interesting that the film was released in 2013, which is the pivot point for a wider cultural take on tech. 2013 was the year of The Internship – Owen Wilson and Vince Vaughn as a pair of old guys (early 40s) who get a job at Google – a largely benign look at the megacorp in the era when Google argued that their “don’t be evil” culture made it impossible for them to be the bad guys. Her came out the same year – Joaquin Phoenix falls in love with an operating system – and told a more nuanced, more problematic story about the human/tech interface. The following year, 2014, was when the Harvard professor Shoshana Zuboff coined the phrase “surveillance capitalism”, an extension of the notion borrowed from TV advertising that “if you’re not paying for the product, then you are the product”. And that’s where we all live now.

App slots right into the darker end of that moment of transition, dreaming up increasingly lurid scenarios where Anna wants one thing – from removing the app from her phone to saving her friend’s life – and the app says no.

Why doesn’t she just throw the phone away, get a new sim, a new number, start afresh? Good question, not entirely answered. But Hoekstra’s fierce commitment to the role helps to leap the various chasms of implausibility, and she’s on screen for almost every second of the film.

Towards the end, as things build towards a climax of bad stuff, old school tropes re-assert themselves. The villain of the piece isn’t a big bad megacorp harvesting Anna’s data, the algorithms watching every move she makes, it’s a human being, and the jeopardy Anna and her student circle are subjected to starts to become more physical in nature rather than something less tangible. A good thing, probably, it’s hard to get worked up about ones and zeroes.

At only one hour 15 minutes, App doesn’t mess about. Told with a good measure of urgency and creatively working around a smallish budget, it’s a good, fun thriller. Reword that in terms of UX if you like.

App – Watch it/buy it at Amazon

Director: Bobby BoermansWriter: Robert A. JansenStars: Hannah Hoekstra, Isis Cabolet, Robert de HoogSummary: A young psychology student is drawn into the dark and fearful world of a diabolic and mysterious App that starts to terrorize her, distributing compromising photographs, videos and text messages about herself and delves deeper and deeper into her personal life, flawlessly exposing all of her deepest secrets. Originally in Dutch, international version dubbed to English.