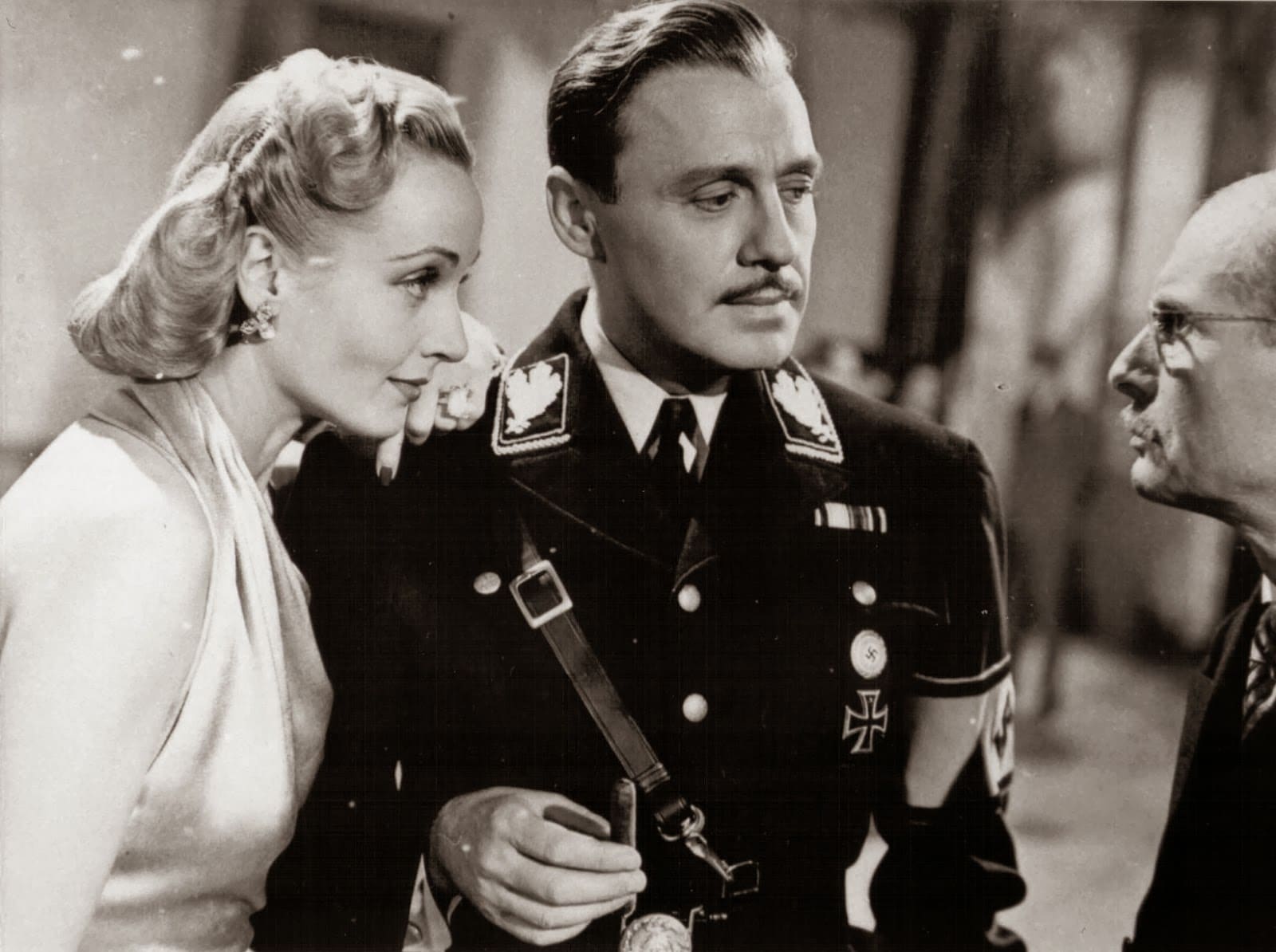 To Be or Not to Be

Farcical Nazis. Nearly 30 years before Mel Brooks had a go in The Producers, here’s To Be or Not to Be, in which Ernst Lubitsch lays down the template.

The comparisons are not endless, but in one respect 1942’s To Be or Not to Be does mimic The Producers – it’s set in the world of the theatre, itself a good target for comedy, which is where most of the laughs come from for the first chunk of the film.

We’re in Poland, just before the outbreak of the Second World War, where a theatrical troupe is putting on nightly shows of Hamlet while rehearsing their next show, an anti-Nazi piece called Gestapo. The company’s big cheese, a ham who wishes he wasn’t, is played by Jack Benny. His wife, smarter, cooler and more accomplished as an actor, is played by Carole Lombard.

Coming between Mr and Mrs Tura is Sobinski (Robert Stack), the spunky young Polish lieutenant who is making a move on Mrs T each night when her husband is on stage launching into the famous soliloquy from Hamlet. “To be or not to be…” Mr Tura drones, at which point the lieutenant gets up noisily from his seat in the second row and scurries off to the waiting Mrs T, who isn’t sure about all this business but can’t help herself.

Extra-marital shenanigans and nightly interruptions to the Bard’s most famous speech are suspended when the Nazis suddenly invade the country. Sobinski heads to London to fly with the RAF’s Polish squadron and Mr and Mrs T settle down to life under occupation, until they are called on to get involved in a dangerous spying mission involving a treacherous Polish professor, Siletski (Stanley Ridges), and Warsaw’s Nazi big noise, Colonel Ehrhardt (Sig Ruman).

Here, with much raiding of the dressing-up box and much impersonation of Nazis, is where the film takes off… and where it flew into trouble. The switching of registers from comedy to wartime thriller and back to comedy again caught some audience members off guard, though Lubitsch signals like crazy when he’s changing lane, his big winking indicator being Werner Heymann’s score.

Some of the jokes were also too much for audiences. There’s one where Professor Siletsky (it’s actually Tura in disguise at this point) is flattering the Nazi Colonel with the gossip that in London Ehrhardt is so famous that he has a nickname – Concentration Camp Ehrhardt. Ehrhardt quips back – “Yes, we do the concentrating and the Poles do the camping.” It’s not the world’s funniest gag, but it gets marks for hitting a poor-taste bullseye.

The fact that the film can slide around so easily – some audience reactions of the time to one side – is down to Lubitsch’s light as air direction and the breathless screwball pace of the whole thing.

This is the best film Jack Benny ever made – it was his favourite – and he’s actually acting in it, as well as playing the familiar Benny stand-up persona, a roll of the eyes, a purse of the lips, a slight mince in the walk. It’s not the best film Lombard ever made ,but it is her final one – she was dead in a plane crash before it premiered. She decided to star in it (against husband Clark Gable’s objections) not because it was a great role for her, it isn’t, but because of the strength of the material and the quality of the rest of the cast. It really is a strong cast – Sig Ruhm as the ruthless but useless Ehrhardt, Stanley Ridges as the silky but fatally libido-driven professor, Stack as a naive greenhorn brimming with gee-willickers enthusiasm, as well as Lionel Atwill and Felix Bressart as a couple of spear-carriers, Jews who have always wanted to play Shylock.

The fact they are Jews is never mentioned, but this was Hollywood at the time – full of Jews who couldn’t gain membership of the country club – but Shylock’s speech from the Merchant of Venice (“if you prick us, do we not bleed…”) surfaces several times. Lubitch (himself Jewish) clearly wants Jewishness on the agenda, if not on the marquee.

Unusually for a film set during wartime, though the Nazis are the butt of the jokes and are generally portrayed as buffoons, Lubitsch humanises them a touch. They’re bad guys but knockabout bad guys. It’s part of his famous “Lubitsch touch” and what makes him a great writer/producer/director. For more evidence, see almost every other minute of this superbly written, crafted and played film.