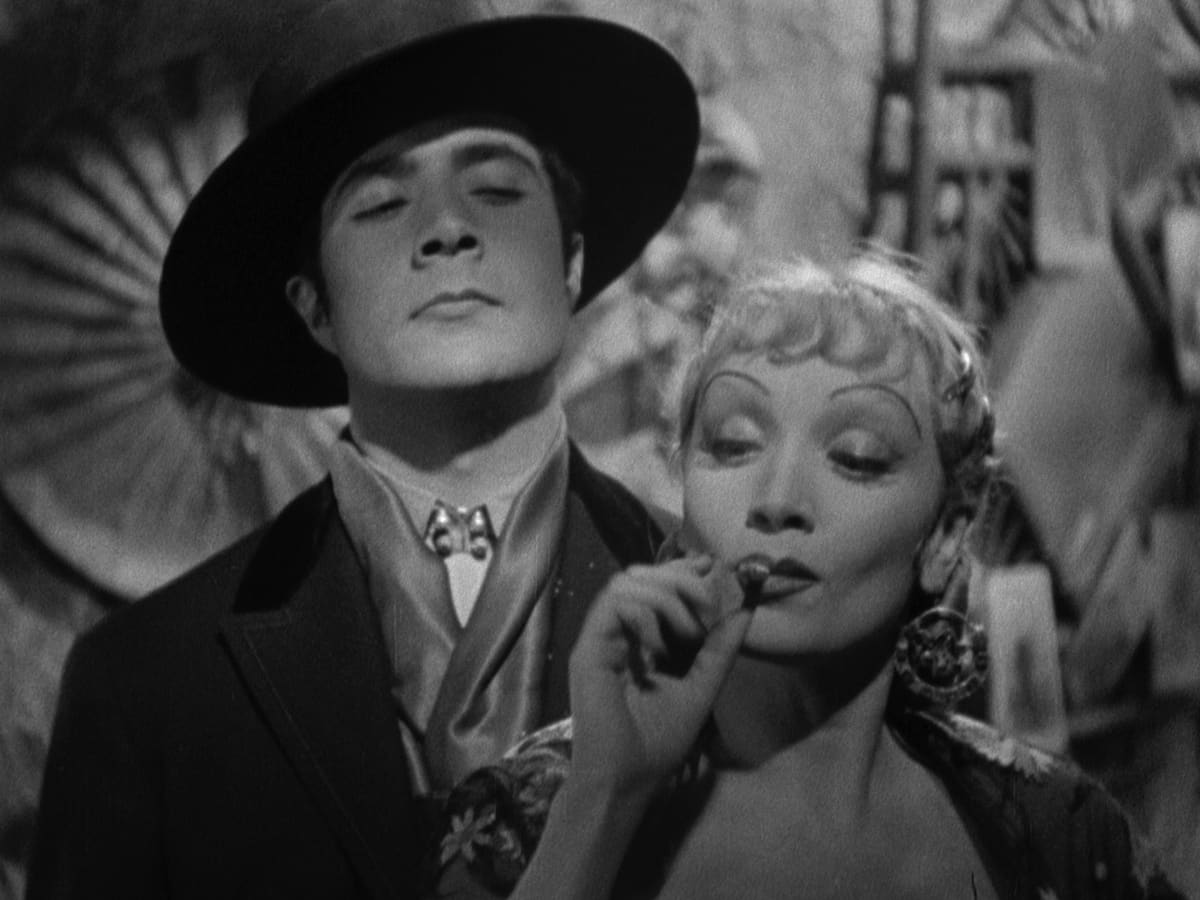 The Devil Is a Woman

It’s set in Spain, and Dietrich plays Concha Perez, a beauty spotted first on a float at the carnival by dashing gay blade Antonio Galvan (Cesar Romero), who falls for her instantly and badly. Woe betide any man who messes with Concha, Galvan is told by older, wiser Captain Pasqual Costelar (Lionel Atwill), a soldier and stuffed shirt who has already thrown himself on those rocks. And in a protracted flashback he relates how Concha led him on, then rebuffed him again and again and again. Dissolving back to the present, the older and considerably greyer Costelar makes Galvan swear he’ll have nothing to do with Concha. An oath Galvan instantly breaks. And so the two men end up in a duel. That, in essence, is the entire plot.

So the woman is a bit of a devil, but really this film is about what fools men are. It’s all done as a comedy, with Dietrich’s eyebrows painted on so high on her forehead they’re almost in the hairline, in a permanent “Who? Me?” exclamation.

There are several brilliant things about this film but the most obvious is the way that all the other actors are acting between themselves while Dietrich, pantomiming like crazy, plays only to the audience. What idiots these men are, she seems to be semaphoring, as she swaggers from one to the next and either Galvan or Costelar (but mostly Costelar) makes a fool of himself over her yet again.

Who is this woman anyway? One minute Concha is working in a cigarette factory, the next she’s a dutiful daughter with a mother (played almost in pantomime dame style by Alison Skipworth) who seems intent on selling her child to the highest bidder, the next she seems to be a prostitute in a brothel run by a doughty old senorita (Tempe Pigott). At yet another point she’s a nightclub singer (she sings one number, another was cut). Whack-a-mole Concha keeps popping up everywhere, clearly an avatar for the Universal Woman. Or the bad one, at any rate.

Dietrich’s portrayal of Concha faces two ways in another sense. To the boys she’s a fiery Latin, all hot blood and emotion ruling over reason. To the audience she’s obviously a cool, smart operator who can spot a sucker from a mile off and knows how to take him for everything he’s got. Silly Concha, the men think. Silly men, is what the audience see. It’s funny.

This was the last feature Dietrich and director/svengali Josef von Sternberg made together and it’s the best looking of the lot. Partly this is because of the quality of the print that’s come down to us over the decades. Franco’s fascists were taking over in Spain as this was made and they didn’t like the picture it painted of their country, and in particular the character of Galvan, who is a Republican (and a good guy), so they put pressure on Paramount to destroy the print. Whether Paramount entirely complied isn’t entirely clear but in any case Dietrich had been given a pristine print by von Sternberg for safekeeping, and it’s that print we see versions of today. It’s immaculate, and an astonishing reminder of the brilliance of these black and white films when they were first shown.

Von Sternberg does his usual mad set-dressing routine, with every act, scene and frame tricked out to impress, top to bottom and front to back – look at the opening carnival scene, and the number of balloons and streamers festooning the frame.

And he also does his “Dietrich as screen goddess” routine with Marlene. Look at the clothes, by Travis Banton, the hair, the make-up, the lighting – it’s all exquisite, sometimes to the point of ridiculousness and beyond. That white tasselled outfit Dietrich wears towards the end is as preposterous as it is beautiful (I couldn’t find a good picture of it or I’d have posted it).

Lovely to see Edward Everett Horton – one of the great comedy stalwarts of the 1930s – as a pompous governor. Lovely also to see Romero, if you mainly know him as the Joker in the 1960s TV Batman, as a lithe young man.