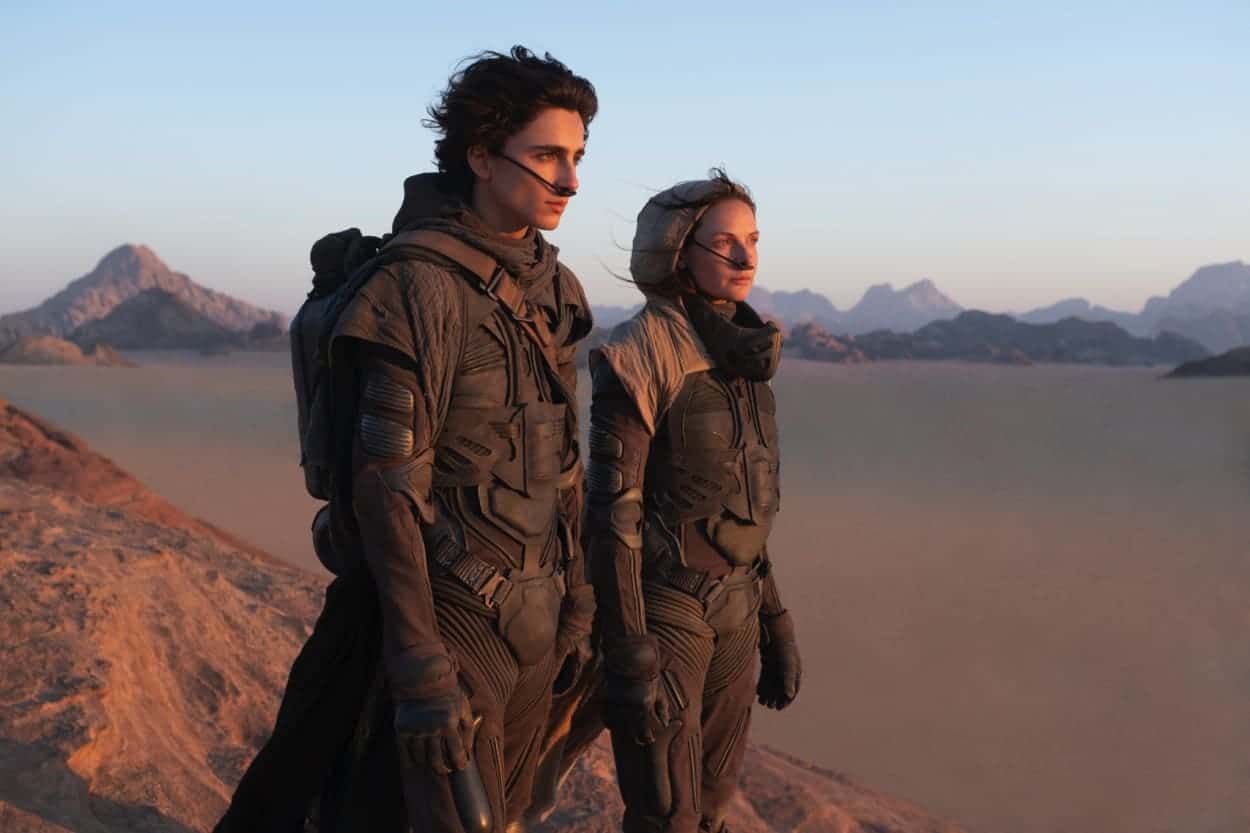 “Dreams are messages from the deep,” it says right up at the front of Denis Villeneuve’s 2021 adaptation of Dune, possibly a nod to David Lynch, whose hazy 1984 version crashed and burned in spectacular, almost sci-fi fashion.

Other nods – the design of the stillsuits and the sandworms for instance – also hark back to Lynch, a magnanimous gesture on the part of Villeneuve who, after Arrival and Bladerunner 2049, has nothing to prove in the realm of sci-fi.

Lynch was trying to make his version of Frank Herbert’s novel a David Lynch film, dreamy and out there, but his film also tugged in the opposite direction, towards the mainstream Star Wars-y sci-fi vision of his producers. Neither ended up getting what they wanted. Villeneuve, by contrast, can do exactly what he wants at this point in his career, having not made an artistic or financial mis-step since his mainstream breakthrough with 2010’s Incendies (though Enemy came close).

In short, Lynch’s is a mess, Villeneuve’s is a masterpiece, and there are a mass of reasons for both that go beyond the skill, talent and vision of either film-maker.

The story here remains the same – it’s the future and out in the galaxy somewhere the Emperor is worrying that he’s losing his grip on power. So he indulges in a bit of divide and rule with the two noble houses most likely to threaten him, by getting them to fight over a desert planet called Arrakis, source of Spice, the most valuable commodity in the known Universe, a substance with both practical and magical qualities. Not only is Arrakis (known as Dune) a sandy wastland, it’s infested with sandworms, predatory monsters that erupt from beneath the surface to devour whatever has disturbed them.

On one side (boo) we have the Harkonnen, led by the fat and uncouth Baron Vladimir Harkonnen (almost unrecognisable Stellan Skarsgård), on the other (hooray), the slender and refined Atreides clan, headed by Duke Leto (Oscar Isaac), accompanied by his svelte consort Lady Jessica (Rebecca Ferguson) and his son and heir Paul (Timothée Chalamet).

Paul is the focus, since this is a Jesus-Buddha-Mohammad-Luke Skywalker-Neo story of the callow youth overcoming obstacles and growing into a prophet/master of his own destiny, and Chalamet, it must be said, is perfectly cast as Paul, the proud yet delicate looks of the Renaissance princeling being ideal for what Villeneuve is laying down.

When Lynch made his Dune in 1984, Star Wars (which had borrowed so much from Frank Herbert’s book) was only seven years in the past. I’m guessing, but Lynch, possibly keen to avoid the charge of plagiarism, fought shy of leaning too closely into George Lucas’s vision. All these years later, Villeneuve has no such qualms and goes all in on the Star Wars ethos, borrowing its swagger, its “hey, kid” camaraderie and, to an extent, its look, especially in the many sandy sequences filmed in Jordan, the stand-in for Arrakis.

It’s got a medieval Game of Thrones glam thing going on too, and its narrative joys are similar – there is no really strong plot pulling us through, rather we’re expected to enjoy rolling around in the lore.

This Dune is all about world-building on the most massive of scales, yet there’s a fanatical attention to detail throughout, most obviously in the various flying vehicles, the cityscape on Arrakis and the sandworms (nod to Lynch). Villeneuve’s pique when Warners decided to stream it on HBO (Covid played a role here) is entirely understandable. He’d shot it for IMAX and though I’m not one of those “you really should see this in the cinema” wonks, for maximum effect here’s one you really should see in the cinema.

A visceral, spectacular experience that only gets to roughly the halfway point in Frank Herbert’s story, the rest of it coming in part two. “This is only the beginning,” says Chani (played by the much-trailed Zendaya, who’s clearly coming into her own in the next instalment). And you believe her. Please don’t make part two be like The Matrix Reloaded.

Dune – Watch it/buy it at Amazon

Director: Denis VilleneuveWriter: Jon Spaihts, Denis Villeneuve, Eric RothStars: TimothÃ©e Chalamet, Rebecca Ferguson, ZendayaSummary: A mythic and emotionally charged hero's journey, "Dune" tells the story of Paul Atreides, a brilliant and gifted young man born into a great destiny beyond his understanding, who must travel to the most dangerous planet in the universe to ensure the future of his family and his people. As malevolent forces explode into conflict over the planet's exclusive supply of the most precious resource in existence-a commodity capable of unlocking humanity's greatest potential-only those who can conquer their fear will survive. —Warner Bros.