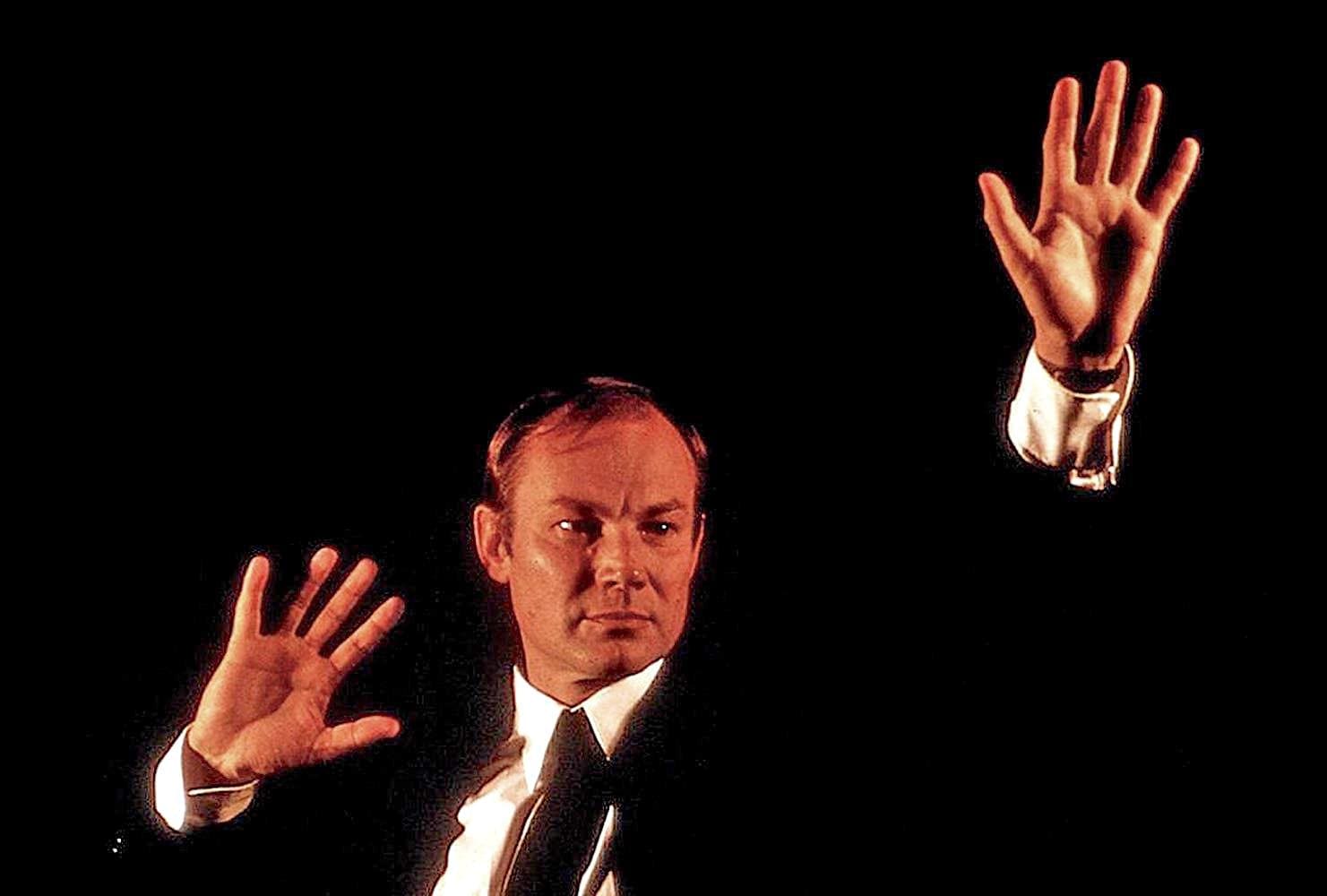 Magic and the Nazis. Hanussen, the bizarre and true story of Eric Jan Hanussen, is ideal big screen material, you’d have thought, since the Austrian stage hypnotist and soothsayer was a charismatic performer who held Germans in his thrall in the dying days of the Weimar Republic and into the Nazi era. The parallels with Hitler are obvious, and once you add in the rumour that Hanussen was the man who taught Hitler his techniques of mass manipulation and crowd control, it has all the ingredients of a story with a ready audience.

However, there have been only two attempts at it. A 1955 version which seems to have vanished into the ether, and this one from István Szabó in 1988, starring Klaus Maria Brandauer.

It’s the last of three collaborations between Szábo and Brandauer detailing the rise of men on the make, all of them with no real sense of personal integrity. If Hanussen doesn’t work as well as the other two, Mephisto and Colonel Redl, it’s still a great showcase for Brandauer, who here plays a soldier injured in the First World War who discovers he has a great gift for mind control after a traumatised fellow soldier threatens to blow everyone in his ward to pieces with a hand grenade.

Hanussen – then still going by the name Klaus Schneider – talks the man down, using techniques he picked up dabbling in variety before the war. These work on women too. He’s a man with the ability to charm females into his bed, starting with the hospital’s head nurse, the mistress of the conscientious Dr Bettelheim (Erland Josephson), the liberal, humane man of reason responsible for Schneider’s recovery. As he prepares to leave the hospital and set out for a life on the stage Hanussen is already playing with fire.

The grenade incident is one of many meticulously constructed set pieces which daisy chain through this luxuriously appointed film – an Indian clairvoyant act, children doing a Mini-Me version of a Mozart opera, a sojourn at the spa town of Karlovy Vary (or Karlsbad, as it still was), an appointment with the photographer Henni Stahl (a Leni Riefenstahl type), who’s shooting heroic nudes as Hanussen arrives. A grand courtroom scene. Decadent Weimar parties. A Nazi rally. Szábo keeps it coming.

Is Hanussen, as he exotically rebrands himself, partly in an attempt to put distance between himself and his Jewishness, a phoney? Szabó gives us a couple of instances where the clairvoyant makes remarkable predictions – a ship will founder at sea, he says, the price of cotton will drop from 93 to 25 overnight, he says – which come absolutely true. At a certain point, breaking with his “no politics” rule, Hanussen predicts that Hitler will become the Chancellor of Germany. At another the Reichstag fire, the prediction that ultimately seals his fate.

The fact that Hanussen was injured in the First World War, is charismatic and can hold a crowd in his thrall, and that his birthday is 20 April, Hitler’s birthday, leads us inevitably to make connections. Hitler never appears, and Szabó doesn’t engage with the rumours that Hanussen became his personal clairvoyant or that he taught him his demagogue’s tricks, though again the suggestions are there.

At a certain point you might start muttering under your breath, “OK, I get it”. The clamour of the relentless read-across undoes some of the great work. Worse, to make this read-across work, Szabó has de-Judaified Schneider/Hanussen (whose real name was the more obviously Jewish Steinschneider), which seems perverse in the circumstances. Mephisto and Colonel Redl were far less heavy handed. As for the suggestion that Hanussen, the Mitteleuropean Mensch, also represents the fissured war-torn continent, it’s an idea hinted at rather than explored. Maybe that’s a good thing.

Brandauer is great though. Lively, loose, plausible, charming, humane, suggesting with a nanoscond flicker of interiority here and there that this man knows exactly what he’s about and is conducting the orchestra of his own life, even though for the most part Hanussen plays out as the story of a man caught up in events beyond his control.

Where does it all end? Where do you think? Not well.

As I write (November 2021) there is no Blu-ray of this film. No one has remastered it. All the versions out there seem to be soft and milky. The dubbed sound needs working on too. While it’s not a perfect film by any means, Hanussen is a good one and deserves better than what looks like a VHS transfer.

Hanussen – Watch it/buy it at Amazon

Director: IstvÃ¡n SzabÃ³Writer: PÃ©ter Dobai, Erik Jan Hanussen, Paul HenggeStars: Klaus Maria Brandauer, Erland Josephson, IldikÃ³ BÃ¡nsÃ¡giSummary: A man's story parallels Hitler's rise. Austrian Klaus Schneider, wounded in World War I, recovers in the care of Dr. Emil Bettleheim. Bettleheim discovers that Schneider possesses powers of empathy and of clairvoyance, such that could aid suicidal patients. After the war, with one friend as his manager and another as his lover, Schneider changes his name to Eric Jan Hanussen and goes to Berlin, as a hypnotist and clairvoyant performing in halls and theaters. He always speaks the truth, which brings him to the attention of powerful Nazis. He predicts their rise (good propaganda for them) and their violence (not so good). He's in pain and at risk. What is Hanussen's future? —<jhailey@hotmail.com>