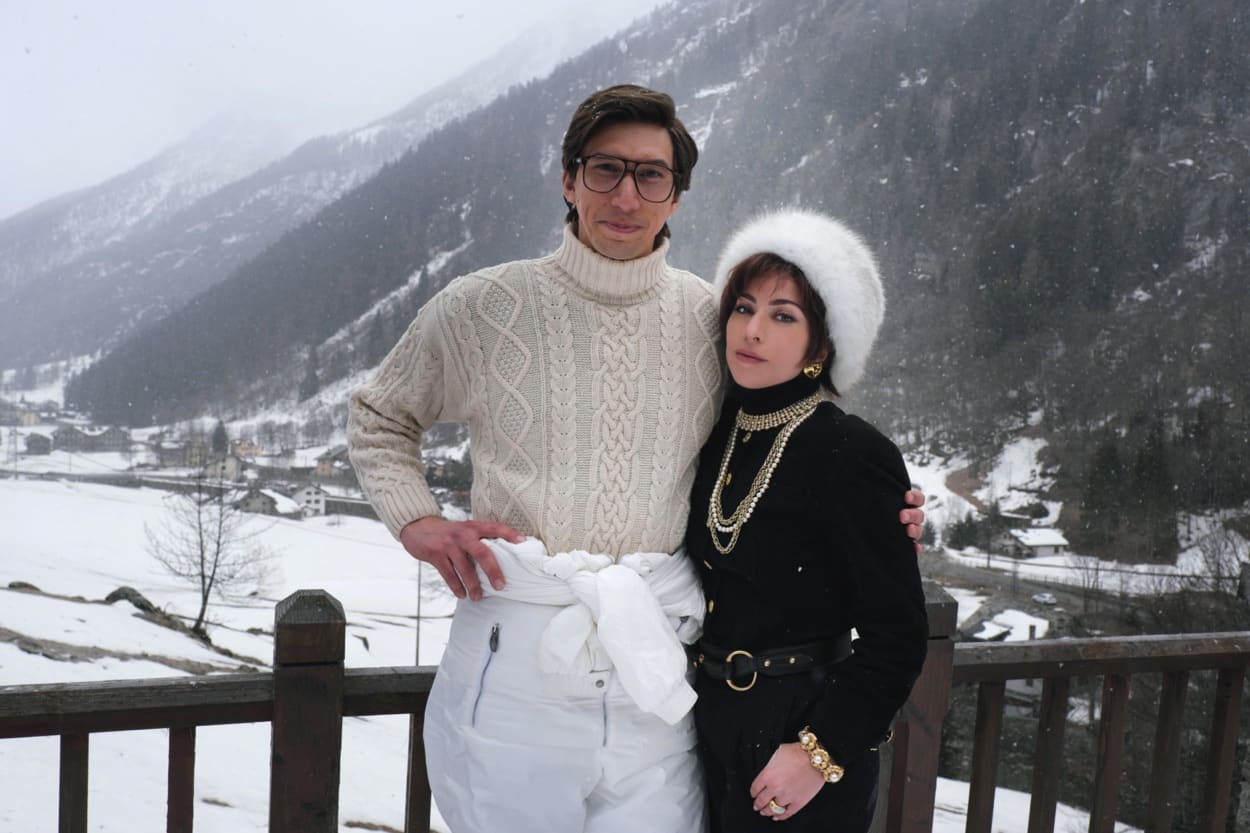 House of Gucci, Ridley Scott, this looks like a good fit. A fashion house relying on its image to shift product and a director who started out in advertising and still has an eye for an arresting visual. And so it proves to be, mostly… though by the end you might be staring at the screen with head slightly aslant. The what, the huh?

Pushing comparisons to beyond their limit, in some ways it’s a remake of Alien, though this time Lady Gaga plays the invading creature who’s going to wreak havoc, a brassy little minx called Patrizia who bumps into sober, low-key Maurizio Gucci (Adam Driver) – scion of the fashion house – by accident at a party in the late 1970s and, not even blinking between gear changes, grabs hold and hangs on for dear life.

In the whirl of a montage Patrizia and Maurizio are dating, then madly in love, then married, then she’s pregnant. And though Maurizio is planning on being a lawyer and has little interest in the house of Gucci, his wife has other ideas.

This is a story of four Gucci men and one non-Gucci woman, who is never allowed to forget that she isn’t really a Gucci at all, but an arriviste. Currently running the company (into the ground) are ascetic, patrician Rodolfo, Maurizio’s father, and Rodolfo’s raffish brother, Aldo. Aldo’s son, Paolo, also believes he has a role to play in the company’s future, which is one of the few things that the other three guys can all agree on – Paolo is a hopeless incompetent who must be kept away from the levers of power no matter what.

The film is essentially a battle royal between Patrizia and the four men, each being worked by this charming schemer in an attempt to move control of the company over to her and Maurizio. And if Maurizio proves to be less than pliable, then ultimately to herself.

It’s a true story, told in a breathless Jackie Collins airport-bonkbuster style, with everyone speaking in cod Italian accents and over-acting just enough to let us know that they know we know (or something). Which is all very well until things take a mortally serious turn towards the end, when these tonal decisions by Scott and his writers, Becky Johnston and Roberto Bentivegna (working from the book by Sara Gay Forden), suddenly start to look very questionable indeed.

Until then, though, all is highly enjoyable. Lady Gaga, as Lady Gucci, is cute, bright and amazingly good as the cunning Patrizia, while Adam Driver lays right back into the role of Maurizio, catching the languid air of someone born into proper wealth and whose real nature is only exposed when the source of that wealth is threatened. Jeremy Irons is not in it half enough as ascetic, patrician Rodolfo, leaving Al Pacino to steal most of the limelight as Aldo, a shambling huckster who looks like he’s been baked in a volcano. Jared Leto as the talentless Paolo delivers another of those strangely over-the-top Leto performances – in prosthetics so convincing it might have been someone else entirely – the Joker as a disappointed, balding middle-aged man.

En route to the finale, by which point two people will be dead, the Gucci brand is resurrected and Patrizia to an extent is vindicated. This is all very interesting in an MBA case study kind of way, though House of Gucci is far too interested in the house of Gucci and not quite enough interested in Patrizia. In his heart Scott surely wanted to make a catwalk movie – all that music (David Bowie, Blondie, Donna Summer, George Michael in among the operatic arias), and with a cast full of the types you might see on the front row at a fashion show (Salma Hayek, Camille Cottin, Jack Huston) – closely followed by his desire to make a film about how the very wealthy live. Patrizia’s story comes in a very late third.

In art, as in life, it does not end up too well for Patrizia.

House of Gucci – Watch it/buy it at Amazon