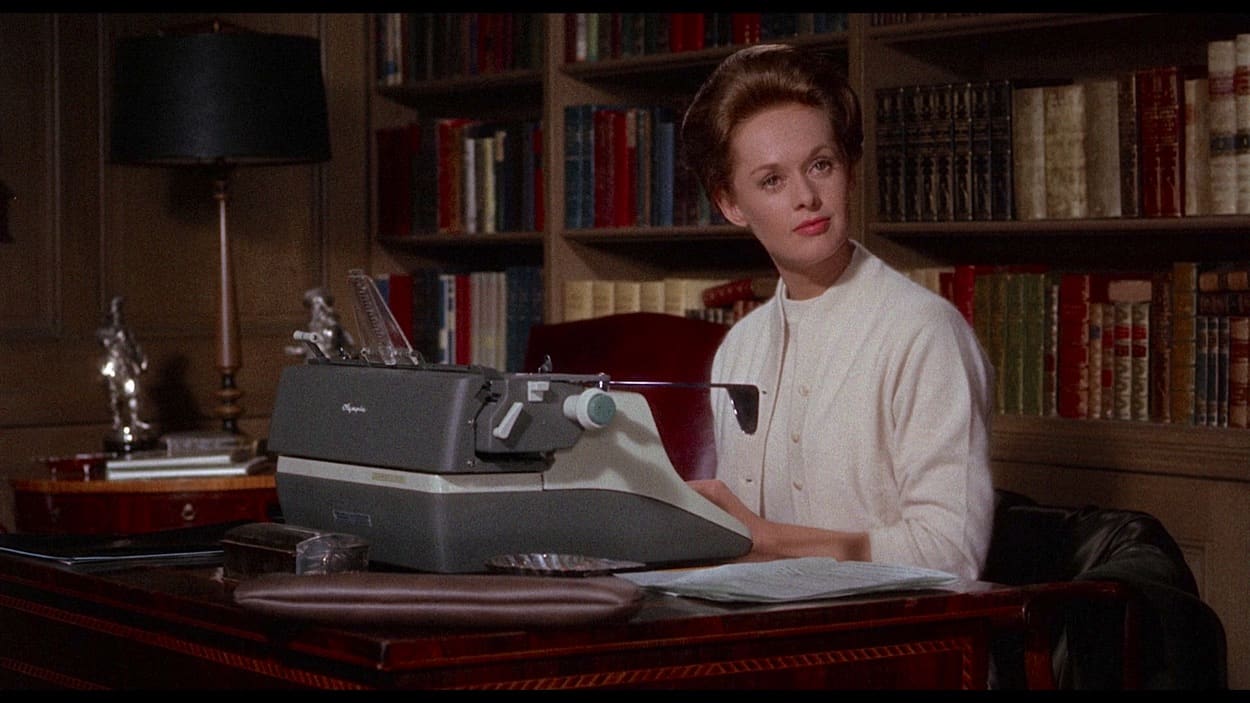 1964’s Marnie is Alfred Hitchcock on the comeback trail. True, the previous year’s The Birds had been a big hit, with barely any critics openly saying what a lot of them must have inwardly thought – that it’s not top-flight (ouch) Hitchcock. It had made a stack of cash for the director and Paramount studios. But Hitchcock knew it wasn’t quite up there with the best.

And so he set out to make a better film by deliberately borrowing from the best – himself. From Psycho another blonde called Marion (as Marnie is first introduced), the mother issues and a lot of fraught sexuality. From the 1950s high era of North by Northwest/Vertigo/Rear Window the impeccable lush looks and the emphasis on colour – the importance of Marnie’s hair (and its changing colour) in this film cannot be denied. From the 1940s a fascination with Freudian psychology, criminal pathology, guilt and split personalities. Hitchcock occasionally reaches even further back, to the semi-Expressionism of his 1930s films, wonky camera angles intruding here and there to suggest Marnie’s fragmenting grip on reason. Tying it all together is a score by Bernard Herrmann that’s designed to evoke memories of Psycho – sawing strings aplenty.

It’s a “when pathologies meet” story of a pretty con artist who steals from one boss after another, changing her looks and her name as she goes, until she runs into someone who recognises her from one of her previous grifts. He, instead of shopping her, falls for her and decides to marry her, in spite of the fact that she’s a wrong’un, and “frigid” to boot.

Tippi Hedren, Hitchcock’s newly minted star from The Birds, plays the troubled Marnie, Sean Connery (introduced by Bernard Herrmann with a reference to the James Bond theme) is the dashing, handsome and rich Mark – both are excellent, though neither of their characters seem entirely plausible.

“You Freud, me Jane,” Marnie says to her new husband at one point, boiling down to a line the film’s arc – Mark’s attempts, by means fair and (eventually) foul to fix the broken woman he’s met and disastrously fallen for. If Marnie is all messed up, so, in his own way, is Mark.

Plenty of attempts have been made to see in Marnie and Mark the real-life relationship between Hedren and her director, and if you want to read the film as a fictionalisation of a desperate fat old director’s fantasies about his sexy new star, the film won’t stop you. Getting Sean Connery in to play a version of yourself being a perk of the job, if a bit self-flagellating.

But it’s also a fascinating story about a woman trying to assert herself in a world that won’t let her. “I cannot bear to be handled,” Marnie says to Mark at one point, attempting for once to be honest with him. This is a woman who wants to control rather than be controlled. Good luck in a marriage to a man who, James Stewart-style in Vertigo, is intent on remodelling the woman in his life.

Before getting too far along “Marnie as feminist tract” path, it’s worth remembering that Marnie’s pathology is disabling; Mark’s is ennabling. And ennobling – he is improved by contact with his new wife; she is driven increasingly towards madness. If she starts the film as a cool Marion Crane Mark II, she ends it as a version of bonkers Norman Bates, and Marnie’s relationship with her disabled mother only emphasises it.

Marnie’s thieving is seen as driven by an aberrant psyche, negative energy, whereas same behaviour in a male (think Cary Grant in To Catch a Thief) is all about bravado and self-assertion. Adding to the complexity, Hitchcock also has an axe to grind for class, with much made of the fact that Marnie comes from a poor background, her mother even more so. In Marnie it’s need rather than greed that’s eventually identified as the driver of so much of the deviancy, and drama.

All that said – the feminism, the classism, the frigidity-as-pathology, Mark’s noble character, Marnie’s mother’s bad parenting – this is a film full of yes-buts. For every assertion there’s a counter assertion. In the end it comes down to – is Marnie mad or just bad?

So much back projection, so many obviously painted backdrops, so much done in the studio that should have been done outside – what an obviously artificial as well as a bizarre and complex film this is, and the lack of Hitchcockian set pieces to give us respite from the fraught psychology only strengthens the suspicion that what’s on display is a representation of Hitchcock’s mindset when he made it – desperate, thwarted, impotent, past his best. At that level, if at no other, it’s a work of genius.

Marnie – Watch it/buy it at Amazon